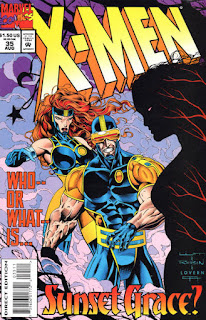 In a Nutshell
Cyclops & Phoenix return from the future/their honeymoon.

Plot
Cyclops & Phoenix awaken in their bodies, their minds having been returned from the far future by Mother Askani, aboard a SHIELD helicarrier. Nick Fury explains that he brought them  on board after a local woman they met on their honeymoon named Sunset used her powers to open a dimensional rift. With the rift threatening the entire planet, Sunset has asked for Cyclops & Phoenix. The pair enter the rift & encounter Grace. She explains that once her powers allowed her to escape into this pocket dimension, but after she tried to save her family by sending them into it at the time of their deaths, she lost control, and Charles Xavier had to help her regain control of her power. In the process though, she lost the ability to access the dimension, until she encountered Cyclops & Phoenix and their mission to the future unlocked her abilities. Phoenix is able to locate her family inside the rift, and after they're reunited, Sunset closes the doorway, sending Cyclops & Phoenix through. The world spared, Phoenix confirms to Cyclops that Sunset's family died, and that, as Sunset created the alternate dimension in the first place, Jean merely helped her subconsciously create facsimiles of them so she could live out her final years in peace & happiness.

Firsts and Other Notables
Cyclops & Phoenix return to the present, following their time spent in the bodies of Slym & Redd in the Cyclops & Phoenix miniseries, in this issue, creating one of those weird sci-fi scenarios in which the two characters suddenly have dozens of years worth of memories in their heads despite having been gone from their present for only a few moments. 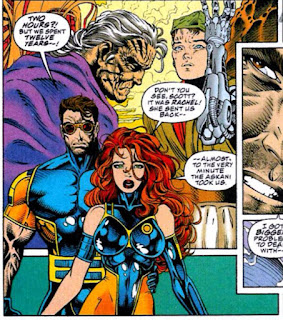 This is the first appearance of Sunset Grace, an older woman with psychic powers that enable her to create a psychedelic pocket dimension over which she has control. It is also, to date, her only appearance. In the course of the story, it's revealed that when she was younger, Professor X helped her gain control of her powers, making her another heretofore unmentioned character from Xavier's past (of course, such characters in Xavier's past are dwarfed by the ones in Wolverine's past). 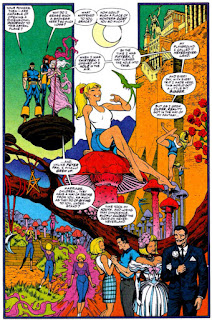 Fury says he tried to contact Xavier to deal with Sunset Grace, but the mansions’ systems were offline; Uncanny X-Men #316 will reveal why.

The issue concludes with a little half page "Phalanx Covenant" preview. 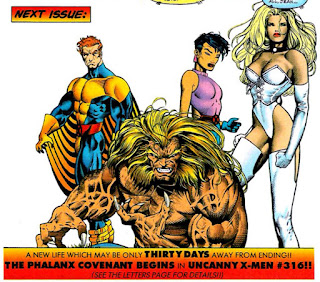 Creator Central
Liam Sharpe, who drew X-Men Unlimited #5, is the guest penciler of this issue. His work is still very 90s in places, but fits the material in this issue much better (or, at least, his work here seems more like a precursor to his Testament stuff, particularly in some of the full page spreads set inside Grace’s fantasy land dimension).

A Work in Progress
While their minds are in the future, Scott & Jean’s bodies are picked up by SHIELD, who presumably put them in new uniforms, though neither seems very standard issue and have some...questionable design elements (it also represents another example of the unspoken comic book trope in which characters are stripped down and re-dressed while unconscious).

Prior to plunging into the spatial rift after Jean, Cyclops thinks of the people whose deaths (actual or otherwise) he’s felt responsible for, and they include his parents, Thunderbird, Madelyne and Nathan.

At one point Jean hangs a lampshade on the idea that Rachel brought her & Cyclops to the future as much as have a chance to be a family with Nathan as to help overthrow Apocalypse. 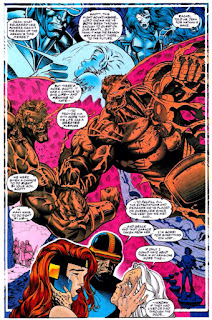 The Grim 'n' Gritty 90s
The focus on Jean’s butt in this otherwise incongruous hug seems a bit gratuitous.

It's in the Mail
The upcoming Rogue limited series gets lots of plugs in this issue’s two page letter column.

Austin's Analysis
Like Uncanny #315, this is a pre-crossover, "treading water" issue, complete with a guest artist. And like Uncanny #315, it nevertheless uses the opportunity to advance the overall narrative even while it bides time for the more immediate Phalanx storyline to kick into gear. Of course, the big narrative advancement here is the return of Scott & Jean to the series, coming back from their decade-long honeymoon spent raising Cable after a four issue absence (along with a brief one-panel setup for "Phalanx Covenant", establishing that the mansion is unreachable for some reason). But more than that, Nicieza uses this as an opportunity for Scott & Jean to reflect on the events of the Adventure of Cyclops & Phoenix miniseries (and arguably fill-in any readers who skipped it).

He does this mostly through the character of Sunset Grace, someone else who lost her family and, like Scott & Jean, is given, by issue's end, an opportunity to reclaim that lose. How well the thematic parallels work is debatable (it's always difficult to measure the emotional weight of characters with decades of history & reader relationships against that of a one-off character created specifically in response to the existing character), but the effort is appreciated, especially given how The Adventures of Cyclops & Phoenix was a Lobdell story, not a Nicieza one (showing once again just how much the writers are, essentially, two-handing the books at this point in time), while the art here, for all its occasional 90s trappings, seems to be a much better representation of Liam Sharpe's skills than his previous X-book work. This is by no means a standout story - I doubt I'll ever feel terribly compelled to revisit it again, and re-reading it for this review, nothing really dislodged my previous recollection of it as nothing more than "the issue where Scott & Jean come back from the future", which happens on literally the first page - but, again like Uncanny #315, it's better than average as far as "pre-crossover time killing" issues go.