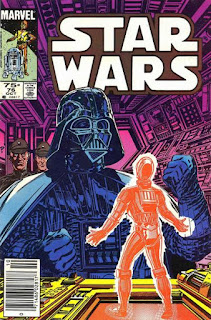 "Artoo-Detoo to the Rescue"
October 1983

Plot
Darth Vader meets with his officers aboard the Executor to discuss the situation on Iskalon, but is enraged when he's contacted by K-3PX and learns Luke Skywalker was on the planet when Admiral Tower ordered the attack on Pavilion. On Iskalon, as Luke, Leia & Kiro tend to the dead, Kendle appears, having declared herself the head of the school and falsely blaming the Rebels & Kiro for the destruction. On Gamandar, Admiral Tower interrogates Mone & the captive Rebels, during which Mone learns Kendle betrayed them. Tower is interrupted when he is arrested on Vader's orders & dragged away. This gives Artoo an opening to free the Rebels, and they escape aboard the Falcon as Vader orders Tower's execution & prepares to go to Iskalon to search for Luke. On Iskalon, Luke, Leia & Kiro are outnumbered when the Falcon arrives. Kendle is killed in the ensuing conflict, and Mone mourns both her death & her betrayal. He then declares that from now on the school will reside in the depths of Iskalon, shunning contact with airbreathers as long as the Empire remains.

Firsts and Other Notables
This issue features an actual (ie non-holographic/flashback-induced) rare-for-this-series appearance by Darth Vader. 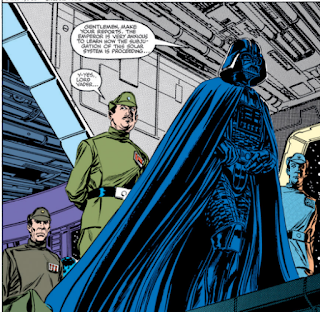 Vader mentions that the Empire will be making its final assault against the Rebels soon, a reference to the trap being laid by the Emperor as revealed in Return of the Jedi.

Vader is also less concerned with locating Tay Vanis and the data he stole (presumably because the Rebellion learning about the second Death Star is part of the Emperor’s plan).

I hear the “what?” Vader exclaims upon learning Luke was on Iskalon when Tower tried to destroy in my head as the same what he cries out in New Hope when Han shows up at the end. 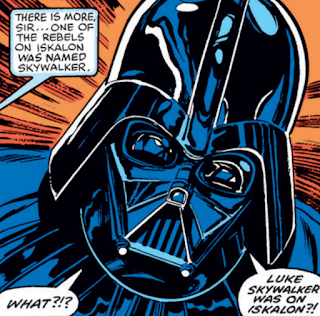 Finally, a scheduling note for upcoming "Force in Focus" comic reviews. Because Marvel opted to publish their Return of the Jedi adaptation in a separate miniseries, rather than as part of the ongoing, we are now entering into a brief era in which there are, essentially, two Star Wars series on shelves at the same time (plus, the series third annual drops during this time). To that end, I will be handling reviews of both series the same way I do the X-books for "X-aminations". That is, I will look at each issue of each series in any given month, rather than doing all the Jedi issues between the issues of Star Wars that mark the transistion from pre-Jedi continuity to post-Jedi. The goal, as with "X-aminations", is to mimic what a reader would see on the shelves and be able to read in any given month.

To that end, here's what the review schedule will look like:

And so on from there, with issue #81 of the series the first to take place after Return of the Jedi.

A Work in Progress
Luke uses the Force to hurl debris at Kendle (though mostly as a distraction to allow he, Leia and Kiro the ability to escape the mob she’s frenzying up, rather than as a legitimate offensive attack). 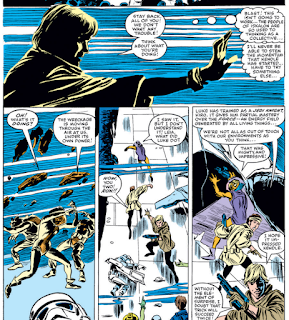 Mone learns about his wife’s betrayal in this issue. 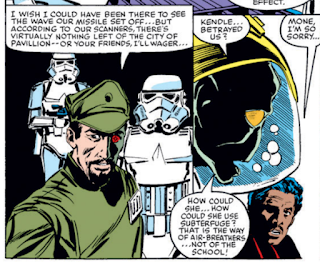 Kendle is ultimately killed in this issue, and when Mone returns from Gamamdar, he takes control of the surviving water breathers and closes off the planet to future Rebel activity, saying he’s taking the school deep underwater as long as the Empire exists. 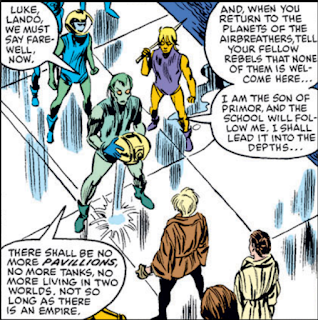 It’s revealed that while fooling around on his own, Artoo convinced the Citadels computers to ignore the Falcon, because Artoo is the best. 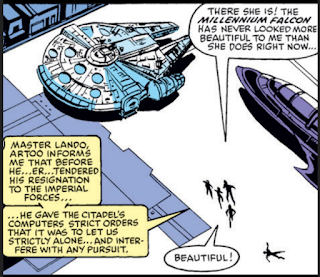 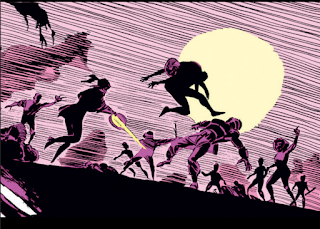 That 70s Comic
Chewbacca straight up snaps a Stormtrooper’s neck at one point, which seems especially graphic for this series. 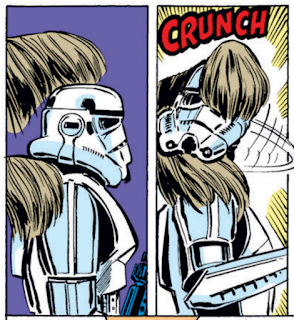 Austin's Analysis
Duffy wraps up the first phase of the "Search for Tay Vanis" - the search will continue next issue, but the Iskalon part of the story concludes here - strongly. For one thing, it's always great when Artoo gets to save the day, especially when it involves the fact that he's basically been laying the groundwork necessary for him to rescue his friends since before his friends were even captured, as if he knows those silly fleshlings are going to get into trouble eventually. For another, the ending is bittersweet - the Rebels escape Gamandar, of course, and Tower, the antagonist-du-jour, is defeated, but the people of Iskalon still have to deal with the fact that their civilization has been laid to waste simply for harboring the Rebels, Mone has to deal with the fact that his wife betrayed them (thus inadvertently bringing about said destruction), and the Rebels, no closer to finding Tay Vanis, are effectively banished from Iskalon as a result. Even Tower's defeat comes at the hands of a pissed off Darth Vader, rather than as a result of anything the heroes did.

It's a complex and surprisingly bleak conclusion to a story, made all the more remarkable given how rarely this series goes for that vibe - certainly, the Rebels are never allowed to definitively defeat the Empire, and the more immediate search for Han has been consistently stymied, but in general, this series tends to feature conclusions with a more triumphant vibe to them than what is featured here. As the book heads into its final permutation as it transitions into the post Return of the Jedi setting, its good to see Duffy stretching the boundaries of the kind of stories it can tell.

Next Issue
Everybody's going to Jabba's as the comic book adaptation of the third film in the Star Wars trilogy begins in Return of the Jedi #1!