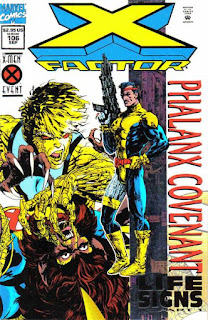 Plot
X-Factor arrives at the former monastery base of the Acolytes, called there by Professor X. They find X-Force & Excalibur waiting for them, and Xavier explains how the Phalanx infiltrated Muir Island, prompting Excalibur's flight to the monastery. During the briefing, Cannonball notices that Wolfsbane has gone missing, and he follows her deeper into the monastery, where Douglock is being sequestered. Elsewhere, Stephen Lang grapples with the sudden influx of rebelliousness within the Phalanx hive mind, including the canine-esque Shinar who is making his way through the European countryside. Back at the monastery, Wolfsbane & Cannonball are are soon joined by Xavier & Forge, who is overwhelmed when his perception of Douglock mixes with Xavier's telepathy. He asks Xavier to leave, and Douglock proceeds to tell them the history of the Phalanx, including their biological imperative to eliminate organic life inherited from Warlock's DNA. He then tells Forge he needs his help to learn more about the Phalanx, then fights his way past Nightcrawler, Polaris & Shadowcat to escape the monastery with a captive Forge, Wolfsbane & Cannonball in tow. The group then disappears, and Xavier declares he can't locate them.

Firsts and Other Notables
"Life Signs", the second "Phalanx Covenant" substory, begins in this issue, and will unfold in subsequent issues of X-Force & Excalibur. It chronicles the efforts of the three spinoff X-teams, led by Xavier, to prevent the Phalanx from contacting their extra-terrestrial brethren and eliminating all organic life on Earth.

To that end, this issue introduces Shinar, another leader-type for the Phalanx, who is operating on his own agenda (independent from Stephen Lang and the more focus anti-mutant agenda). His canine look comes from the fact that he infected and transformed a dog (something of which Lang doesn't approve). 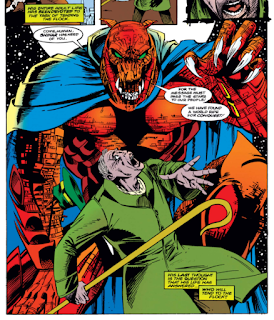 Douglock presents the terrestrial history of the Phalanx, explaining how the Genosha government sold the remains of Warlock to US government scientists after “X-Tinction Agenda”, who studied it in an attempt to create living Sentinels. Because of Stephen Lang’s association with the cybernetic brain of Master Mold, he was chosen as the physical repository for the intelligence needed to control the Phalanx. 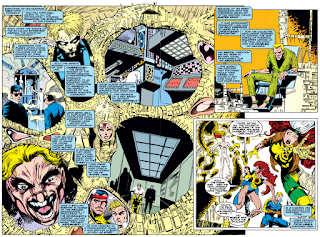 After attempts to model the Phalanx after dead people (like Candy Southern) failed, the Phalanx turned to living recruits culled from the Friends of Humanity. 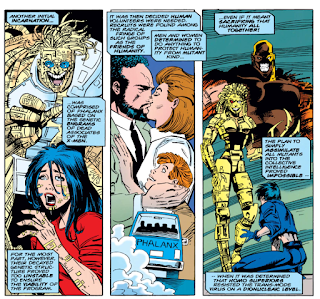 Douglock reveals here that, for all the intentions of Lang, Hodge and the human scientists who created the Phalanx to target mutants, the Phalanx is, unbeknownst to them, working to fulfill an imperative to destroy all organic life built into the genetics of the Technarchy (Warlock’s race), as that genetic material (from Warlock’s remains) forms the basis of the Phalanx. 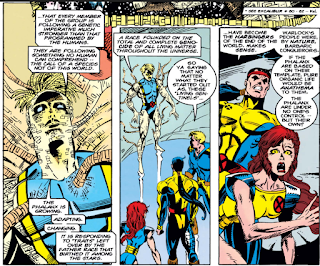 The ad featured in the previous issue’s letters page is the cover to this issue. 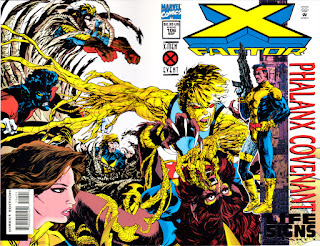 Wolfsbane & Cannonball both come face-to-face with Douglock, the maybe/sort of resurrected version of their former New Mutants teammate, for the first time in this issue. 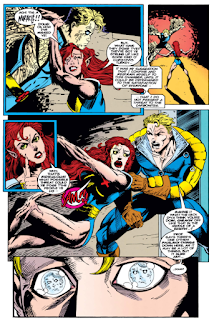 Creator Central
Regular artist Jan Duursema returns this issue, but is helped out by fill-in artist supreme Roger Cruz, though thanks to Cruz's ability to mimic styles, the transition between the two isn't too jarring.

A Work in Progress
The combined X-teams are operating out of the French monastery previously used by the Acolytes in Uncanny X-Men #300, which Professor X says masks the presence of mutants through some unknown means. 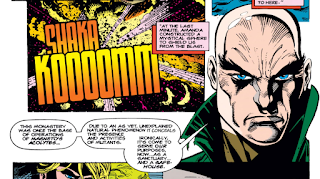 Strong Guy almost triggers a Misunderstanding Fight after receiving a less-than-warm welcome upon arriving in France. 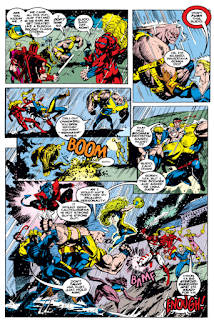 At one point in this issue, it’s implied the Phalanx are capable of assimilating mutants, even though Uncanny 316 specifically said they couldn’t. Later in the issue, Hodge makes it clear that the Phalanx are still working to figure out why they can’t assimilate mutants.

Douglock is somehow able to phase through a wall. 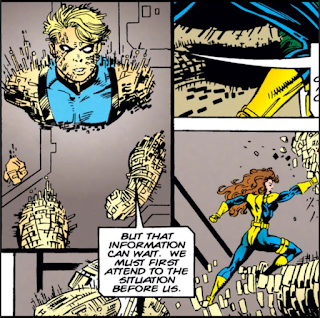 It’s established here that Xavier has tasked Wolverine & Cable with freeing the X-Men, in “Final Sanction”.

Wolfsbane & Meggan run into each other in this issue, with Wolfsbane noting that Meggan's scent has changed (a detail clearly meant to underscore the recent changes Meggan has undergone) since last they met, though near as I can recall, the only time they would have met & could have interacted (such that Rahne would be familiar with her scent) was all the way back in New Mutants Annual #2, and even then, the pair isn't shown interacting on page much at all. 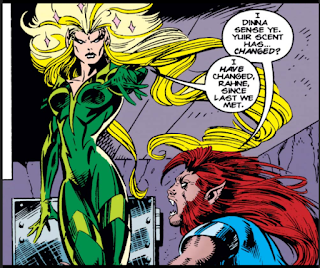 Douglock insists he is merely a Phalanx-created copy of Doug & Warlock.

Lang, watching events from other sections of the crossover, is concerned over the increasing independence and rebelliousness of the Phalanx, including Shinar blocking his thoughts from Lang (and assimilating a dog) and Hodge leaving without being dismissed. 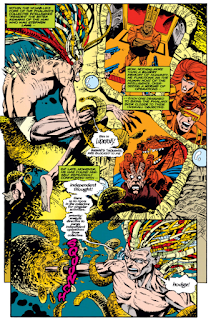 Forge, thanks to his ability to intuitively understand how mechanical things work, is overwhelmed upon seeing Douglock for the first time. 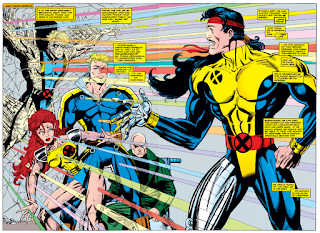 The events of The Douglock Chronicles are erroneously attributed to Excalibur #80-82 in a footnote (#82 hadn’t even been published yet).

Claremontisms
Xavier declares the teams will have to work together “body & soul” to face the threat of the Phalanx. 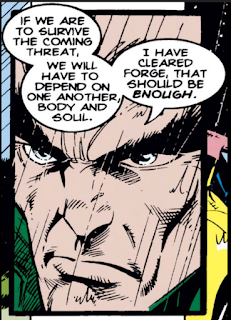 Austin's Analysis
"Phalanx Covenant" is a crossover that breaks down, mostly neatly, into thirds, and two-thirds of those parts are pretty decent. The third that's not so great, "Life Signs", unfortunately begins in this issue, as the "satellite" X-teams (X-Factor, X-Force & Excalibur, along with Professor X) take on the Phalanx. We'll look more closely into why "Life Signs" is the lesser of the "Phalanx Covenant" sub-stories as it unfolds, but in general, it's mostly because the story is a narrative cul-de-sac, both introducing and resolving a specific-to-this-story Phalanx plot & a villain that is mostly disconnected from everything else in the crossover (and it's also kinda boring whilst running around in its little cul-de-sac).

Appropriately enough, this issue is mostly setup, bringing the three teams together, introducing the new villain (briefly), and the new Phalanx threat specific to this story (that they're not just targeting mutants, but all organic life). The best thing it has going for it is the focus on Douglock, specifically Wolfsbane & Cannonball's reactions to a Phalanx that looks like their dead friend. Cannonball's anger at Douglock seems a little out-of-character (I can buy him being suspicious but he acts more personally offended, whereas Wolfsbane accepting that Douglock is Doug is perfectly in character for her), but otherwise, the interactions between the three are the highlight of an issue that is all about setting up a plotline which is the most superfluous and least-engaging of all the "Phalanx Covenant" sub-stories.