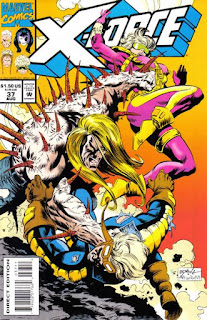 "The Young and the Restless"
August 1994

In a Nutshell
The Externals visit Cannonball at his family farm.

Plot
Confronted by newfound mortality in the face of the Legacy Virus, the Externals seek out Cannonball at his family home. Nicodemus & Burke have died already, and Absalom is infected. Gideon tells Cannonball they've come to him because he represents hope. Meanwhile, at Campe Verde, Domino & Cable discuss a new base of operations for the team, while in the Bronx, Detective Hidalgo receives new information that may help him nail the Callasantos' sisters for the murder of their family. Back in Kentucky, Cannonball asks what the Externals want from him, and Absalom tells him Burke had a precognitive vision that Cannonball or someone close to him holds the key to curing the Legacy Virus. Just then, Absalom's power flares, one of the death knells of the virus, and Cannonball tells the Externals that when the time comes, he'll do whatever he can to help them. After they leave, Cannonball & Boomer declare their love for one another, then Cannonball says it's time to go back to Camp Verde to be with their friends and continue using whatever time they have left to make the world a better place.

Firsts and Other Notables
This issue reveals that not even the Externals are immune to the Legacy Virus, as it reveals that Nicodemus & Burke have both died of the illness (Nicodemus dies on-panel in issue #20; this issue makes it clear it was the Legacy Virus), and that Absalom is afflicted (complete with Revanche/Pyro-style lesions). 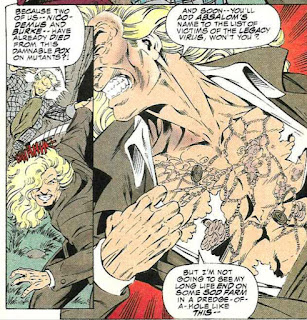 It also confirms that Apocalypse is one of the Externals, and encountered Saul in the 12th century. It also depicts his first encounter with Celestial technology, which claims for himself (though a later story makes it clear this isn't Ship). 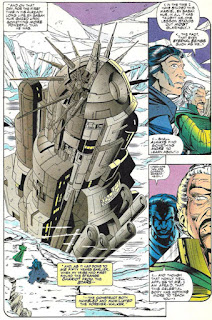 Cable & Domino are shown to be scouting new locations for X-Force’s base, with Cable saying the team has outgrown Camp Verde; in a few issues’ time, they’ll briefly move into the abandoned Murderworld. 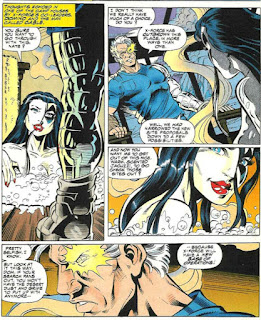 In another subplot scene, we’re introduced to Detective Hidalgo, who is investigating the Callasantos
Sisters for the murder of their family; this is a reference to Feral & Thornn, and this subplot will become plot in issues #40-41. 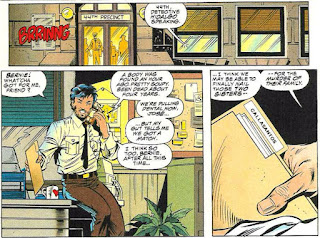 Creator Central
This issue is drawn by Paul Pelletier, which surprised me only because I generally think of him as an artist who came around in the 00s. Apparently, I completely missed that he was working back in the early 90s. As an artist, he strikes me as being Tom Raney or Tom Grummett-esque, in that, his art isn't bad, but I'm never terribly excited to see it, because it usually shows up as a fill-in for the regular artist on a book.

The Chronology Corner
Cable appears here (and in the previous two issues) between issues #14 and #15 of his solo series.

A Work in Progress
Absalom refers to non-immortals as “Eyeblinks”.

Absalom tells the tale of how his mutant powers first manifested (and how he learned he was immortal), which involves him shooting Caleb Hammer in the back. Hammer is one of the more minor of Marvel’s various Old West characters, who first appeared in Marvel Premiere #54. He’ll also appear in the later “Blaze of Glory” miniseries that unites the assorted Old West characters in one tale. 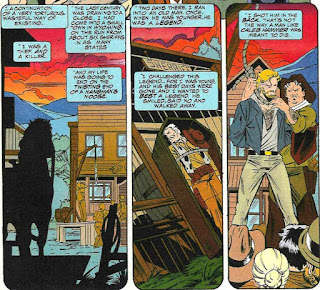 Meanwhile, Gideon reveals that he was a deckhand on the Pinta who died of scurvy. 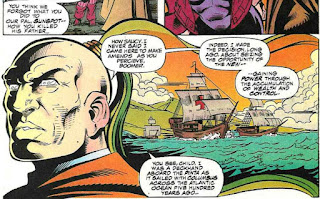 Gideon assigns a specific attribute to each of the Externals (though Apocalypse is left out), with Sam representing hope. 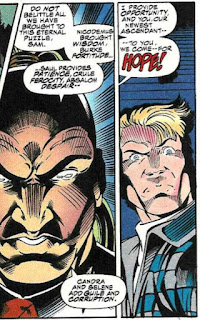 Young Love
In the wake of their encounter with the Externals (and a lot of high-minded talk of mortality), Sam & Boomer declare their love for each other. 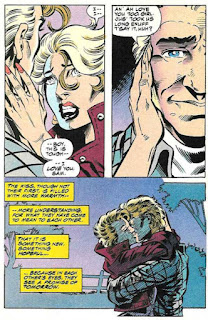 Austin's Analysis
Fabian Nicieza has, over the course of his run as the sole writer on X-Force, done a lot to elevate the series from its Liefeldian beginnings, and, to his credit, he has done it without outwardly rejecting some of the more questionable elements from the series' earliest days. Unfortunately, that approach means, inevitably, he has to tackle the Externals (rather than just ignoring them), and while he already used them earlier in his run (in a way that read very much like an attempt to close that particular book), they return in this issue, as they attempt to reckon with their newly rediscovered mortality in the wake of the Legacy Virus. It's really the first time the group is being presented as something other than scheming, one-dimensional villains, as the threat of the Legacy Virus is used to shave off some of their rough edges. Nicieza is well aware of this (Boomer herself makes it clear to Gideon that they well remember what he did to Sunspot), but plunges forward nevertheless in an effort to make the most of the questionable "Cannonball is part of a secret cabal of immortal mutants!" storyline and give the Externals, collectively, if not individually, some depth.

For the most part, it works, at least in the context of this issue. I mean, no one is going to mourn for Absalom (or really even remember who he is) after this, but Nicieza manages to sell the central idea that this group of power-made schemers used to getting whatever they want is suddenly freaking the hell out because they've learned they're mortal again, and in desperation, they reach out to the one of them with the least incentive to help the rest. Even if we don't particularly care about the Externals, that's a decent premise on which to hang a story, and it works in large part because Sam never really buys what they're selling, with whatever salve he provides to them in the end coming not through any direct action on his part or a sudden acceptance of his role within the group, but just from them running up against his genuine good-heartedness.

The end result is, arguably, the best story involving the Externals which, admittedly, is clearing a very low bar. But kudos again to Nicieza for resisting the urge to just abandon these characters outright and instead squeezing out a tiny bit of lemonade from some very Liefeldian lemons. In the process, he suggests there could be more to the Externals than Gideon's pointlessly-convoluted machinations & the ridiculousness of Krule. There isn't, of course, but for an issue, at least, Nicieza sells the idea that such a thing is possible, which is no easy feat.

Next Issue
Tomorrow, the adventures of Zero conclude in Excalibur #80. Next week, the "Phalanx Covenant" finally begins, in Uncanny X-Men #316 and X-Factor #106.