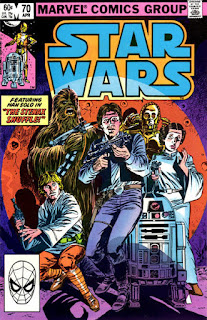 In a Nutshell
Jo Duffy debuts with a flashback tale featuring a trip of new characters.

Plot
Luke and Lando, their respective searches having led them in the same direction, approach the planet Stenex, a place which Luke visited earlier, shortly after he and Han joined the Rebellion. Luke proceeds to tell Lando of how he, Han and Leia came to the planet in search of a missing Rebel cell, finding instead Rik Duel, an old associate of Han's, and Rik's partners. Duel tells Leia that he was tasked by the Rebel cell's leader to stay behind after the rest of the cell fled the incoming Imperial occupation to search for a hidden artifact that could be valuable to the Rebellion. Leia and company agree to help Duel, but when they find the artifact, a statute of a local Stenaxes' god, Duel claims it for himself, intending to sell it to the local Imperial governor, after turning the Rebels over to him. As the Rebels fight back against the summoned Stormtroopers, the native Stenaxes intervene. After they defeat the Stormtroopers, Han points them towards Duel. They attack the exchange between Duel and the Imperial governor, leaving Duel to curse Han's name as the Millennium Falcon flies off. Luke tells Lando they never learned what happened to Duel and his crew, but Lando hopes the Stenaxes will be grateful enough to help them find the bounty hunters Luke & Lando are now seeking, for Han's sake.

Firsts and Other Notables
This issue marks the beginning of (Mary) Jo Duffy's run on the series, a run which will last, with the occasional fill-in interruption, until the end of the series, making her the last of the "big three" writers to shepherd the series at various times (following Archie Goodwin's post-New Hope run and Michelinie's post-Empire one).

It also marks the debut of a new look for Luke, in which the tan Bespin fatigues which had mostly served as his default, non-pilot look for the series post-Empire, are replaced by a black jumpsuit (presumably to mimic his look in the upcoming Return of the Jedi, which at this time, would have been releasing publicity stills and trailers and whatnot) with a tan quilted vest on top, a look which will later be resurrected for Dark Horse's Shadows of the Empire adaptation (which is also set between Empire & Jedi). Though thanks to the setting of the main story in this issue, we end up mostly with White Pajamams Luke, since that was his default look at the time of the story.

In her first issue, Duffy introduces a trio of new characters, and though the fate of all three is left up in the air at the end of the issue, all three will return next issue, and remain semi-regular fixtures throughout the rest of the series. They are Rik Duel, a Han Solo-esque pirate, Chihido, a Rodian (the same species as the film's Greedo), and Dani, a purple-skinned Zeltron who takes an immediate liking to Luke. 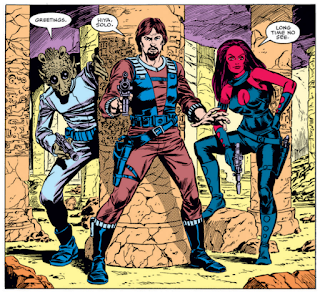 Dani's species, the Zeltrons, introduced here, will actually have something of a long and significant life in the Expanded Universe, getting featured in novels, comics and video games across multiple storytelling eras, including a series in which a Zeltron is the main love interest of a descendant of Luke and part of that series' central trio of characters (in the vein of Luke/Leia/Han).

We get another Imperial leader introduced this issue, Governor Matrin, who is said to have previously served in the Imperial Senate alongside Leia, though this issue also marks his only appearance. 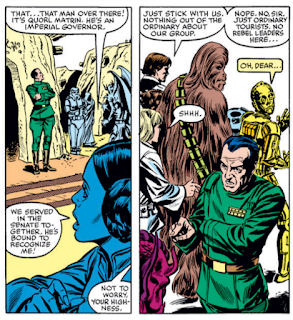 The Statement of Ownership in this issue lists the average number of copies of each issue sold over the previous twelve months to be 205,898 (down from the 230,528 listed in issue #58), with the issue closest to filing date selling 173,430 copies (down from 200,448), so sales are overall continuing to decline from the series' inital astronomic highs (as a point of reference, the Statement of Ownership filed for the sales-ascendant Uncanny X-Men in its issue cover-dated May of ' lists sales numbers of 313,955 overall and 327,223 nearest to filing).

Creator Central
Kerry Gammill and Tom Palmer trade off pencil art throughout the issue, but with Palmer's (appreciated) heavy hand inking the whole thing, the end result is fairly consistent.

A Work in Progress
Between issues, Luke's individual part of the greater search for Han as led him back to Lando, with the pair now converging on a possible location for the bounty hunter Bossk. 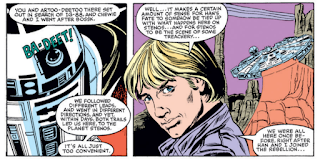 Lando mentions that his unique way of thinking and questionable values makes him (and Han before him) valuable to the Rebellion. 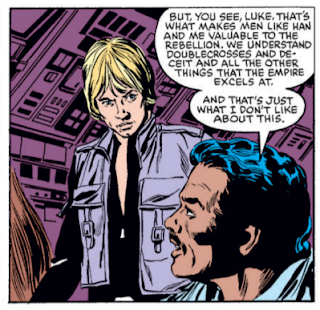 Remember The Empire Strikes Back?
The issue opens with an expository discussion between Luke & Lando that serves as a recap of Han's history and the events leading up to his carbonite bath in Empire. 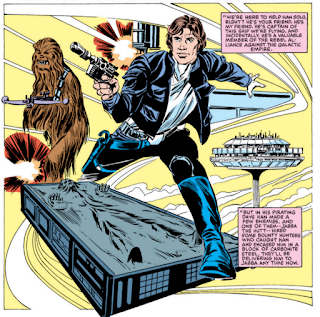 Young Love
Dani is immediately smitten of Luke, an attraction that will continue for most of the rest of her appearances in the series (though which will remain mostly unrequited).

Austin's Analysis
Jo Duffy's long run begins with a weirdly-structured issue. Picking up where Michelinie left off, in the middle of the "Search for Han Solo" story, she more or less sidesteps the immediate setup of last issue's finale (in which Lando & Chewbacca were told Bossk was somewhere Lando didn't want to go) to bring Luke and Lando together, handwaving away Luke's specific "search for Han" mission off-panel. But then, all of that narrative twisting turns out to merely be in service to setting up a flashback tale, set during the series' earlier post-New Hope, pre-Empire time period (and thus able to feature Han). It would read almost like the bulk of this issue was created months ago, as a fill-in/inventory story, with the Luke/Lando framing sequence wedged in just to set it up, except the whole thing is drawn by the same art team, and the characters introduced in the flashback tale will have an immediate impact on the present storyline starting next issue. So the whole thing is really just an oddly-structured way for Duffy to shift the direction of the larger story and put her own stamp on it.

Which, ultimately, is fine. If anything, the biggest problem this issue has is in how gullible the Rebels are in it: Rik Duel's double-cross - turning the Rebels over to the Imperials after they helped him find the idol - seemed so obvious that I was positive Han, a consummate con artist himself, had to be wise to it and was playing along as part of a larger con on his part. But instead, Duffy went in the direction of the Rebels being gullible but good-hearted, with that good-heartedness saving the day in the form of the native Stenaxes, which is thematically appropriate (unintentionally echoing, a bit, the upcoming relationship between the Rebels and the Ewoks in Jedi), but which still leaves the main characters looking like saps in the process. Meanwhile, Duffy's scripting in this issue is very quippy, which is definitely something to watch for in the future. So a mixed bag for the start of her run, as she dulls some of the narrative momentum of "The Search of Han Solo" to set up her own ideas for the story, but she thankfully doesn't completely derail the story or start over from scratch in the process.

Next Issue
Return to Stenex!