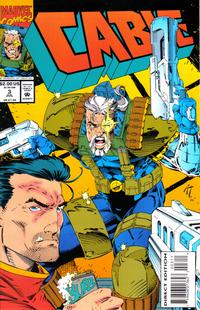 In a Nutshell
Cable answers some questions.

Plot
Cable & Kane are back in the 20th century but stuck in the Time Displacement Core at the bottom of the Pacific Ocean. Cable pulls out some beer to pass the time, and Kane takes the opportunity to ask him some questions. Meanwhile, GW Bridge breaks into Cable's Swiss chalet, while in Sarajevo, Sinsear approaches Weasel, looking for Deadpool. Bridge is stunned to discover Professor running Cable's house, and even more shocked to learn Cable is still alive. Back at the Time Displacement Core, Cable reveals that while he and Kane have been drinking and talking, he's been re-powering the teleportation unit with his own personal power supply. With the unit fully charged, he and Kane teleport to Cable's chalet, and Cable is enraged to find Bridge there. But Bridge quickly tells him that he can tell Cable where X-Force is.

Firsts and Other Notables
The scheduling issues that have plagued this series from the start are on full display here, as roughly a dozen different artists work to pencil and ink this issue. One of those artists is Ian Churchill, who will later become the regular artist on the book after Steve Skroce stays with X-Man post "Age of Apocalypse". Another is Paul Smith, marking the beginning of his brief return to Marvel.

This issue marks the first appearance of Weasel, an information broker said to be in contact with Deadpool. He will next appear in the Deadpool limited series, and become a relative mainstay of the supporting cast in Deadpool's various solo series moving forward. 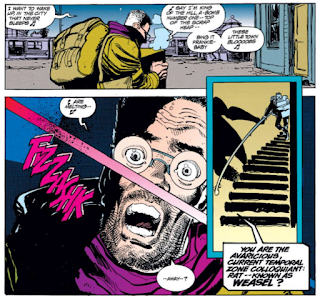 In his discussion with Kane, Cable repeats the notion that he is the clone of Stryfe (and not vice versa). While this was the official plan at one point in time (possibly as last as "X-Cutioner's Song"), at this point we're only three months removed (well, in terms of number of issues) from the start of the story in this series which will confirm once and for all that Cable is the original, so I have to assume this is an intentional misdirect on Nicieza's part, and a possible indication that it is Stryfe who is in control of Cable's body here. 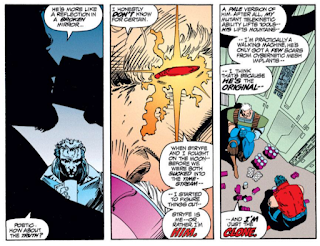 Simiarly, Cable later declares he intends to succeed where Stryfe failed by killing Cyclops and Jean Grey, which seems like a pretty Stryfe-y thing. 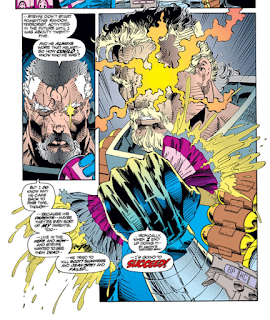 It's revealed here that Graymalkin's destruction in X-Force #21-22 was mostly faked, with Professor staging the explosion to use as cover for re-cloaking the station (though the parts jettisoned by Cannonball were, of course, still jettisoned). Of course, X-Force #25 will shortly reveal that Magneto has co-opted the remains of the station. 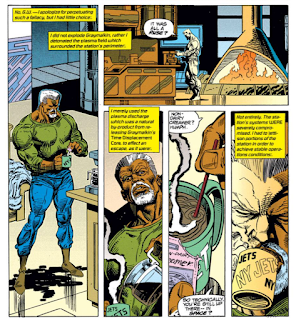 A Work in Progress
We learn a few more details about Kane in this issue: he first fell in with the Wild Pack when he was thirteen, and he became claustrophobic after the events of the Cable miniseries (in which he was buried in rubble). 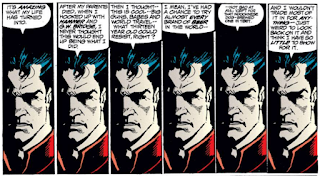 He's also not a fan of canned beer (and Cable once upon a time really liked stouts). 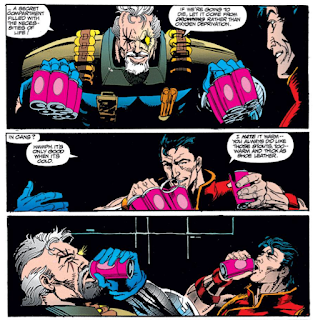 Bridge quitting SHIELD is referenced again, and it is confirmed that "GW" stands for "George Washington" (so his full name is George Washington Bridge). He also provides a rather funny summation of the various theories put forth by the Six Pack to explain Cable. 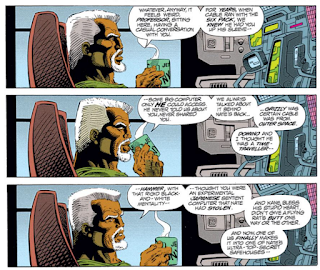 The Grim 'n' Gritty 90s
Weasel refers to Deadpool as "the Pool-meister".

It's in the Mail
Someone writes in to complain about the general confusion of the series' first issue, specifically the sheer number of new characters introduced poorly. The response likens the first issue of the series to the debut of the All New, All Different X-Men, saying people didn't know much about them when they first appeared either, and hoping that someday the writer will be just as fond of Boak and T-Blood as Storm and Nightcrawler. Which is pretty rich, not the least because most of those characters will barely ever appear again.

Austin's Analysis
Though by no means a good issue (how could it be, with so many artists working on what is clearly a rush job?), this is the best issue of the series yet, and the improvement is all down to the fact that Cable is back in the present day, ie a time period readers already know and care about. This opens the series up significantly, allowing the supporting cast to be culled from established characters with ties to Cable (as with Bridge in this issue), instead of brand new ones created just for the series' first two issues. Furthermore, with the series now set in the present, Nicieza is essentially two-handing this book with X-Force, casually and effortlessly using the destruction of Graymalkin over there to inform events in this issue, and using this issue to reveal new information about the events in X-Force, all capped off with Bridge offering to bring Cable to X-Force. So now one half of the Six Pack are set to converge on X-Force here, while the other half is set to do the same over in that series, creating a sort of mini shared universe between the series, set within the larger X-universe. And while a few footnotes to relevant issues here or there would be nice (for both newer readers and older, more forgetful ones), the sudden relevance that comes with taking place in the same timeline as the rest of the X-books does wonders for this series. We're still a ways off from this series being objectively good (or even "flawed but entertaining"), but at least it's finally given us something to appreciate.