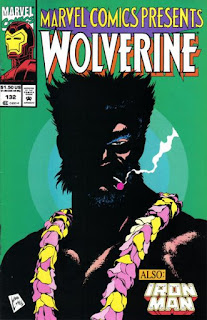 In a Nutshell
Wolverine battles Cyber on a tropical island

Plot
Vacationing on a tropical island, Wolverine encounters a young woman named Kayla fleeing from a cult called the Coven, who intend to bring about a new Dark Age on Earth. After fighting off some members of the Coven, Wolverine & Kayla sleep together, which Kayla says marks Wolverine as her champion; now, the Coven will need to kill him to meet their goals. Meanwhile, the leaders of the Coven, who have hired Cyber, learn of Wolverine's involvement. Wolverine attacks them, but is knocked out, and when he wakes up, he discovers he's been chained to Cyber. The two fight, and Wolverine gets knocked out again. He regains consciousness just as he and Cyber are being lowered into a vat of acid, intended by the Coven as a sacrifice. Cyber manages to cut them free, and the pair escape along with a jewel the Coven needs for their ritual. Wolverine brings the gem to a temple housing a group resisting the Coven, including Kayla. They only want to let Wolverine inside, but are forced to allow Cyber in since he's still chained to Wolverine. Inside, Cyber immediately reveals this has all been a ruse to get him inside the temple, and unlocks the manacle. The temple defiled, the rest of the Coven enter, but Wolverine is able to defeat them by going into a berserker rage, and Cyber escapes in the melee. With the Coven defeated, Kayla reveals the gem they stole was a fake all along, and Wolverine notes that in being deceitful like the Coven, the group has traded a darkness they could see for one that lives in everyone.

Firsts and Other Notables
This story is arguably most notable for featuring the second encounter between Wolverine and Cyber, following Cyber's introductory story in issues #85-92. Of course, between those two stories, Cyber appeared in X-Factor as the leader of the Hells Belles, though no indication of that (nor how he survived his encounter with a train in X-Factor #81) is made here. This does mark the first time a writer other than Peter David writes Cyber.

The other villains of this story are the Coven, a cult intending to bring about the end of the world who have more or less hired Cyber as muscle. I don't believe they ever appear again.

Issue #133 is the last edited by Terry Kavanagh, long time editor of the series, as he steps down to pursue a freelance writing career (this coincides with his departure from Excalibur as the editor of that series, as it gets moved into the X-office following issue #67). All this free time will eventually allow him take over as the writer of X-Man, in the process giving us one of the worst written X-books in history (he will also contribute to Spider-Man's Clone Saga). 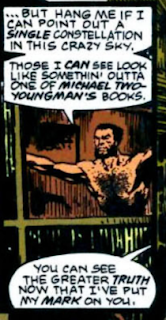 Wolverine and Cyber are chained together with adamantium chains, which is of course necessary to not have Wolverine just slice right through them, but it seems odd that this rando cult would have access to something like that, given how rare adamantium is meant to be. 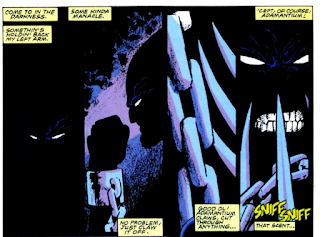 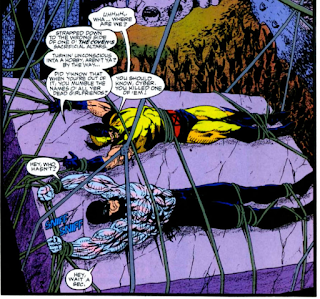 Cyber also mentions that his left eye is fake, the result of his last encounter with Wolverine. 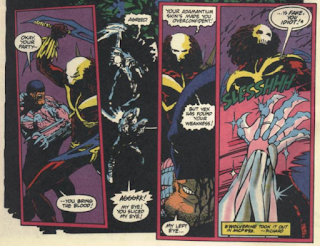 The Grim 'n' Gritty 90s
The primary members of the Coven look like they could have been from an Image book around this time, complete with vague, kewl 90s names like "Fetish" and "Blood Shadow" and "Vex". 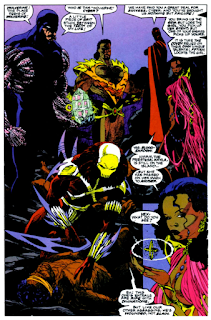 The Reference Section
Cyber compares the Coven to Jim Jones, the cult leader who initiated the mass suicide of his followers at Jonestown, Guyana in the 70s (that event is also where the idiom "drinking the Kool-Aid" comes from).

The Best There is at What He Does
Wolverine jokes that finding trouble is his real mutant power. 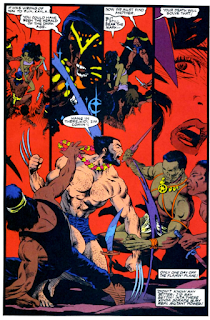 In addition to drowning, acid appears to be something else which can kill Wolverine, at least at this point, as he and Cyber are nearly dropped into a vat of it (the idea being that, at that quantity, it would eat away all his flesh, leaving only his skeleton).

Austin's Analysis
One of the big drawbacks to a lot of the Marvel Comics Presents stories, especially the fluffier, less consequential ones, is that, at eight chapters, they end up feeling very padded. So it's to this story's credit that it starts at something resembling in media res, with Wolverine already on vacation, Cyber already allied with the Coven, and the Coven's plot already in motion. At only five chapters long, the three chapter setup for all that is, mercifully, skipped.

But that aside, this is still another utterly superfluous MCP Wolverine story. There's very little about it which required the presence of Wolverine (you could sub in nearly any character here), as even his rematch with Cyber is relatively underplayed. We can roll our eyes all we want at how hard Peter David worked to setup Cyber as the one foe Wolverine feared in his initial appearance, but that was the key element to their relationship. In that story, Wolverine quaked in fear at the mere mention of the baddie; here, Cyber is just yet another recurring Wolverine foe, with the shared adamantium element the most notable thing that sets him apart from, say, Sabretooth or Lady Deathstrike. So the plot is rote, the characterization basic, the art fine but unexciting: like so many MCP tales before it, it's an utterly harmless, but also utterly value-less, story.

Next Issue
Next week, Cable is back in the present in Cable #3, and Wolverine gets another oneshot in Wolverine: Inner Fury.
Newer Post Older Post Home
Posted by Austin Gorton at 12:00 PM