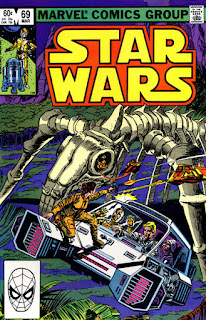 In a Nutshell
Leia & Fenn Shysa team-up to free Mandalore from Imperial rule.

Plot
Leia & Threepio are brought to the Imperial base on Mandalore, and taken before Suprema, the Imperial leader, who declares he will soon kill Fenn Shysa. But as Leia & Threepio are led away by Stormtroopers, one of the troopers turns out to be Shysa in disguise. He cuts a deal with Leia: help him rescue one of his soldiers, Tobbi, and he'll help her capture Dengar. They free Tobbi from his cell, after which Fenn signals his troops outside the base to attack. The group commandeers an airspeeder and heads for Suprema's headquarters, triggering a slave uprising inside the base. Confronting Suprema, Tobbi is lethally shot, but lives long enough to open the doors to the base, allowing the slaves to escape, and then close them before a squad of Stormtroopers can capture Leia, Threepio & Fenn. In the process, he triggers a chain reaction that destroys the base, killing Suprema. Catching up to Dengar, Fenn forces him to admit he wasn't working with Boba Fett, but gives Leia a clue to his possible whereabouts. Meanwhile, Lando & Chewbacca meet an informant about Bossk's whereabouts, but Lando is less than happy when he learns the location.

Firsts and Other Notables
Though he'll return for one more issue (#78), this marks the end of David Michelinie's tenure as the series' regular writer, a run which stretches back to issue #51 and ran uninterrupted from #55. Without a doubt, he is one the prime architects of the series, second only to Archie Goodwin, and responsible for shepherding the series through its tricky post-Empire, pre-Jedi period. Ironically, Michelinie left the series because Marvel pegged Goodwin - who wrote the series' adaptation of The Empire Strikes Back as part of his duties as the series' writer - to adapt Return of the Jedi, something Michelinie had been looking forward to do, especially after having to tread water, narratively-speaking, in so many places during his run.

The vehicles menacing Leia on the cover and in the issue are reminiscent of this toy, which was based on unused design sketches by Ralph McQuarrie, which is probably where the image in this issue came from as well.

The Imperials on Mandalore are led by someone called the Suprema. Though he is a different species from Fenn Shysa and his men, presumably he's native to the planet as well. He also hero-worships Darth Vader, and has a big hologram of the guy in his office (which doesn't quite fit with the currently accepted-depiction of Darth Vader as something of a bogeyman in the Empire, a guy known to the top echelon of Imperial military (and obviously to the guys he works with directly), but a more behind-the-scenes player as far as the rank-and-file are concerned). 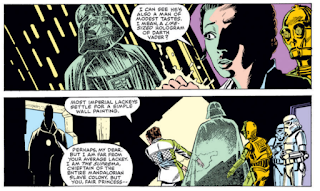 The Imperial base built into the skeleton a deceased creature reminds me of this guy.

A Work in Progress
Dengar gets crossed off the "Fett accomplice" list, but does point Leia to the Anga system as a further lead on Fett's location. 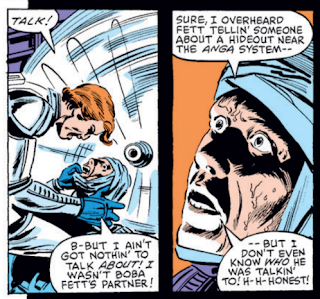 Lando and Chewie, pursuing Bossk, meet Lando's contact on the the Wheel, the massive space station casino that was the setting of issues #18-23, a nice bit of continuity. 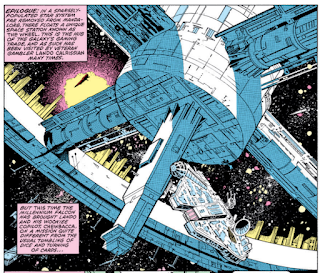 Artistic Achievements
Nice layout on this page recapping the events of the previous issue. If you have to do a recap, at least present it in an entertaining way. 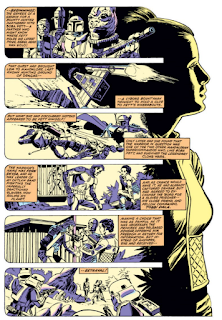 Also fun: during the sequence in which Leia and Fenn are busting Tobbi out of prison, bars are laid over the panels. 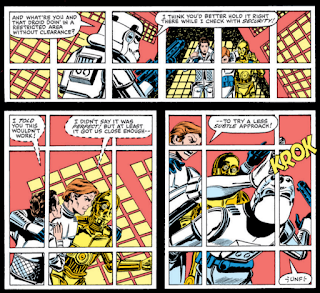 The Space-Lexicon
The Mandalorians refer to Stormtroopers as "Slimetroopers". Zing!

Just Yesterday, In a Galaxy Surprisingly Close By
Fenn Shysa pulls the "your shoelace is untied" gag with a Stormtrooper, despite the fact that Stormtrooper's boots don't have laces (which, to be fair, Michelinie has the Stormtrooper acknowledge). 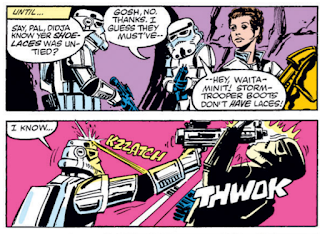 It's in the Mail
A couple fans write in this issue expressing a desire to see Luke & Leia grow closer romantically. Revenge of the Jedi's (still Revenge) release date is given as May 25th (something the response points out is hardly breaking news). And Michelinie's departure from the series is acknowledged (it's said he's moving over to work on Marvel's other LucasFilm series, The Further Adventures of Indiana Jones, with Jo Duffy pegged as his replacement, at least "for the next few months".

David Michelinie on Leaving Star Wars
"I will bow to no one in my respect and admiration for Archie Goodwin, and it's hard to complain when someone who's better than you gets the job. But I'd been battling in the trenches for a couple years, kind of treading water, keeping things going, and I was looking forward to getting the dessert at the end of the meal - which for a Star Wars fan was adapting the third movie, getting to read the screenplay before anyone else, seeing the stills, stuff like that. So it was kind of a slap in the face, and I felt the only thing I could do to keep my self-respect was to the leave the book."

Austin's Analysis
After the previous series-best issue, anything that follows is going to suffer by comparison. And while the dropoff in this issue isn't terribly steep, a dropoff is nevertheless there. Last issue, with its more stylized layouts and narrative urgency, felt like something new for the series; this issue falls back into the series' usual habits, in which one or more (though usually just one) of the main characters overcomes overwhelming odds while facing an Imperial contingent led by a colorful foe, set against the backdrop of a vaguely-exotic (and often jungle-y) world. The previous issue's approach to clever, engaging layouts is still on display here, in places, though they're fewer in number, while Fenn Shysa helps provide an alternate narrative to Leia's "escape from Imperial clutches" obstacle, and the overarching "Search for Han" story advances, however incrementally, by crossing Dengar off the list of possible Bobs Fett partners. Nothing here is bad, just of a piece with so much else of this series' output, and in doing so, it fails to build on or even meet the standards set by the previous issue.

Next Issue
Lando & Chewbacca join the hunt for Han Solo.