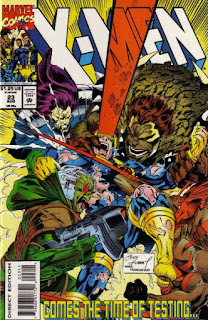 "Leaning Towards Oneself"
August 1993

In a Nutshell
Mr. Sinister kicks off a decades-long mystery.

Plot
In Alaska, Mr. Sinisters insists he only wants to warn Cyclops about Stryfe's mutant-targeting virus, but their discussion is interrupted by the arrival of the Dark Riders, come to test the two. In Japan, Lord Nyoirin tells the X-Men they need to talk to Shinobi and Matsu'o for further answers, while at the X-Mansion, Wolverine reports to Xavier about his findings in the Savage Land.. In Alaska, Mr. Sinister attacks the Dark Riders, telling them they're welcome to fight Cyclops but can't kill him, before disappearing. In Japan, Beast & Gambit visit Shinobi, while Psylocke & Revanche attack Matsu'o. In Alaska, Cyclops fights the Dark Riders long enough for them to declare that he is strong enough to fight in the coming war, leaving Cyclops to ponder what he's learned that day, and decide that the time has come to ask others for help.

Firsts and Other Notables
This issue is most notable and best-remembered as being the introduction of the Third Summers Brother mystery, begun when Mr. Sinister tells Cyclops he merely wants to protect him and his brothers, and Cyclops catches the use of the plural. The mystery is notable for going unresolved for over twenty years (though Fabian Nicieza drops some pretty big hints that Adam X, soon to be introduced in this year's X-Force annual, is the third Summers brother, in issue #39), before Ed Brubaker revisits it in the Deadly Genesis miniseries as part of an anniversary celebration of the All New X-Men, in which Gabriel Summers aka Vulcan is introduced via a massive retcon that establishes Professor X sent a third team of X-Men to Krakoa, after the originals got captured but before he sent the team comprised of Storm, Colossus, Banshee, etc., who counted amongst their number Cyclops & Havok's heretofore unknown brother. 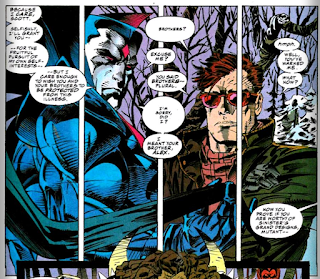 The initial round of the Psylocke/Revanche story comes to a close here as well, with the two characters essentially left with the answer that each is half the other, stirred up and mixed together and then poured out into two different bodies. Eventually, Nicieza will return to this story, presumably once he realizes that doesn't quite fit with previously established events, but for now, the matter is put to rest, with the two women settling in to an uneasy truce as they take down Matsu'o. 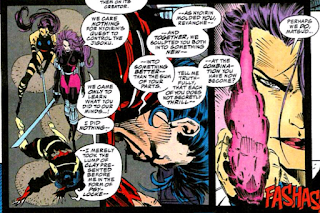 Kwannon-in-British-Psylocke's-Body is called Revanche for the first time here; that's the name the character will use moving forward.

Wolverine reports to Professor X about his findings in the Savage Land in Wolverine #69-71, and once again, it's all but said that Magneto is back (though Xavier remains adamant they can't be sure). 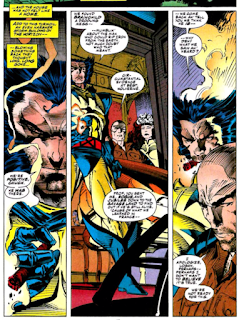 Everyone is also fairly convinced the X-Men can't beat Magneto, and while that adds a nice bit of forboding to his upcoming return, I'm not quite sure why everyone is so certain of that. They've beat him before, and there's more X-Men (plus X-Factor and X-Force if necessary) than ever before. 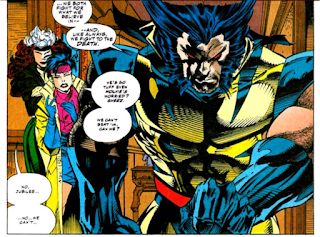 This issue refutes the notion that Mr. Sinister is vulnerable to Cyclop's optic blasts, with the villain surviving a direct hit and saying his apparent death at the end of "Inferno" was staged simply because he wasn't yet ready to face the X-Men (it's worth noting this is the first direct confrontation between Cyclops and Mr. Sinister since the end of "Inferno", something I never quite realized reading this as a kid, assuming they had a much deeper history together I'd yet to read). 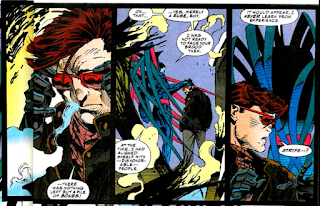 Sinister says his interest in Cyclops is driven by his belief that the balance of power resides in his genetics; this will later be firmed up into the idea that Sinister is trying to find a way to defeat Apocalypse once and for all, and that he orchestrated the creation of the child of Cyclops and Jean Grey (ie Cable) to that end.

It's also noted here that the canister Sinister received from Stryfe in exchange for Cyclops and Jean during "X-Cutioner's Song" was meant to contain the DNA of Cyclops' offspring (ie Stryfe), which is why he was willing to trade Cyclops for it (since he'd already have Cyclops' DNA, but not the DNA of his future kids). 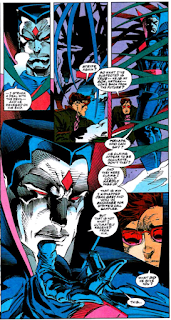 A Work in Progress
Sinister is also cryptic about whether Stryfe is Cyclop's son, suggesting he may know the true relationship between Stryfe and Cable (or is just being cryptic because that's his default setting).

Cyclops is shown the grave of Gordon, Sinister's geneticist seen coughing in X-Force #18, and repeats Stryfe's "pox on mutants" line in discussing the Legacy Virus. 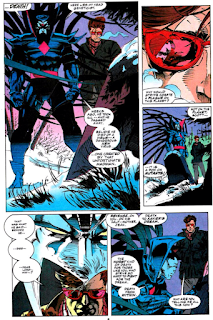 Jean is referred to as Cable/Stryfe's half-mother, which doesn't seem quite right.

The Dark Riders make mention of the High Lord Ascension, as Nicieza continues to try and make the whole High Lord/External thing from X-Force work. 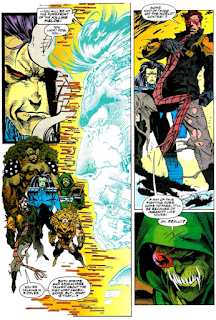 Beast makes a crack about his younger days, a reference to his ongoing "quarter-life crisis" subplot. 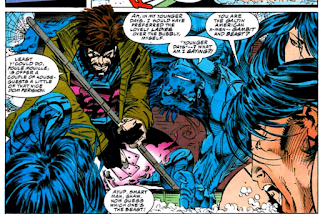 It's established here that X-Men know the Upstarts exist (Lord Nyoirin presumably tells them off-panel), something they inform Shinobi of.

The Awesome and Terrible Power of Cyclops
Cyclops freaks out when the Dark Riders cause him to lose his glasses. 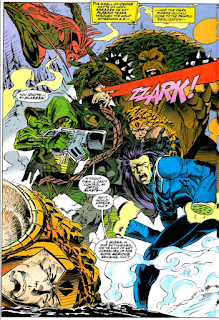 It's in the Mail
A response to a letter in this issue says that the X-Men are funded by Xavier, who is independantly wealthy; presumably, he's come into that wealth since the days he was begging Angel for a loan and moving the X-Men to Magneto's C'thulu island because it was too expensive to rebuild the mansion.

Austin's Analysis
There's a lot of things happening in this issue: the Psylocke/Revanche plotline is, for now, resolved (somewhat abruptly), Magneto's imminent return is made even more ominous, Cyclops battles the Dark Riders, and the Legacy Virus plotline continues to come into shape. But the thing this issue is remembered for, and, frankly, the thing I remember most about it, is that it launched the Third Summers Brother mystery. That it did so via one-line of tossed-off dialogue that, by all accounts, should be the least relevant thing about this issue, is a testement to that particular mystery's staying-power and it's ability to linger in the minds of fans/prompt debate amongst fans.

Of course, it helps that the Third Summers Brother is one of those long-running mysteries launched in the 90s then left for dead, which actually received not only resolution, but a high-profile resolution. It also helps that said resolution has been largely lambasted by fans and is responsible for introducing one of the more annoying X-characters in the history of the franchise, keeping the relevancy of this issue alive even after the mystery it introduces is paid off. Personally, I've never been the biggest fan of that resolution, but have always loved that someone bothered to close out a dangling plotline from one of comic's less-celebrated eras that I figured would never get resolved (but more on that when we get to Deadly Genesis). And I've always genuinely loved this issue chiefly for the tease of possibly life-altering information regarding my favorite character, delivered via one of my favorite means for such teases: cryptic comments from Mr. Sinister.

A lot more happens in this issue than one line of dialogue that doesn't get paid off for over twenty years, all of which is far more relevant to events happening in 1993, yet every time I crack it open, I'm still surprised by just how little of it I remember outside of "...brothers...".

Next Issue
Tomorrow, Cable & Magneto return in X-Force #25. Friday, the Starjammers come to town in Excalibur #68. Next week, Cable #4.