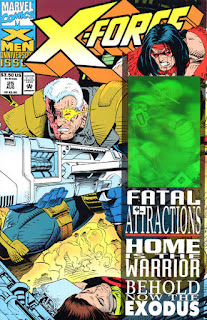 In a Nutshell
Cable reunites with X-Force, then battles Magneto.

Plot
X-Force returns to Camp Verde and realizes somebody has infiltrated their base. They split up to search the complex, with each pair encountering the intruder, who turns out to be Cable. After Cable comes clean with the team, Exodus arrives, extending an invitation to Cannonball & Sunspot, as former members of the New Mutants, to join him on his master's sanctuary. Cannonball agrees, but only after Exodus agrees to bring the rest of the former New Mutants, including Rusty & Skids, with him. They depart, after which Cable reveals Cannonball gave X-Force the means to track them before leaving. The former New Mutants arrive on Avalon, an orbital station created from the remnants of Graymalkin, and meet Exodus' master: a revived Magneto. Just then, the rest of X-Force arrives, and as they battles Exodus, Cannonball rejects Magneto's offer to join him on Avalon. Cable sends the rest of the team away but, determined to save Professor, stays behind. He encounters Magneto, who uses his power to destroy all the metal in Cable's body, grievously wounding him, but Cable manages to retrieve Professor and teleport away. Magneto is disappointed that he failed to sway the next generation of mutants to his side, but tells Exodus it is time to offer sanctuary to the rest of Xavier's brood, and see how they respond.

Firsts and Other Notables
This issue marks Cable's return to X-Force (the series and the team) and, for anyone who hasn't been reading his solo series, his return to life following his apparent death in issue #18. 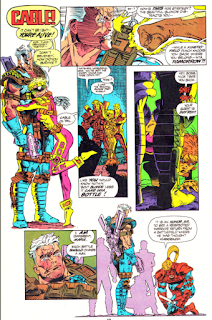 It also marks the first direct, no-doubt appearance of Magneto since his apparent death in X-Men #3, though the next chapter of "Fatal Attractions" in Uncanny X-Men #304 is still considered his "official" return, despite appearing here in full armor and interacting directly with several characters. 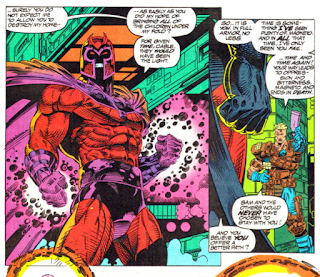 Most notably, he battles Cable directly, and given how upwards of half of Cable is metal, it goes about as well as you would expect, with Magneto seriously injuring Cable in what is likely meant to read, in hindsight, like a preview of what Magneto will do to Wolverine two chapters later in this crossover. In any event, Cable's injuries will prove much less impactful than Wolverine's, with the character mostly recovering in the course of the next few issues. 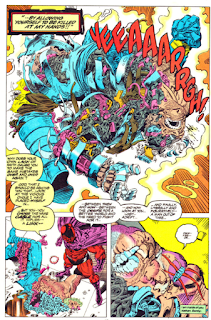 Avalon, Magneto's new orbital space station, made from the remnants of Graymalkin as seen last issue, appears for the first time. Magneto will intend for it to serve as an off-Earth sanctuary for mutants, and it will serve as the chief base of operations for the Acolytes until shortly after "Age of Apocalypse" (when it will, like Asteroid M before it, crash to Earth, and then much later serve as the foundation for the X-Men's Utopia base). 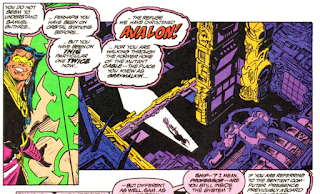 Cable is able to salvage the Professor's programming from Avalon, preventing Magneto from having access to him and enabling Cable to still access Graymalkin's teleportation technology.

Cable is more or less welcomed back with open arms to X-Force, though Cannonball gives him some grief, and insists on getting some straight answers from Cable, which he provides via an expository soliloquy which actually puts a lot of stuff into context for the first time, revealing his full name, his role as a fighter against Apocalypse in the future, and establishing that he specifically traveled back in time in order to prevent Apocalypse (and people like him) from coming into power (later stories will specifically cite killing Apocalypse as his chief time-traveling motivation). Cable also reveals that Cannonball was a key to his plan: to develop a High Lord taught by both Xavier and Magneto, thus giving him the potential to become a savior for both mankind and mutantkind in the future. 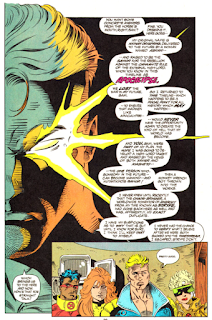 He does admit he's keeping some things from them still, in part because he no longer knows for sure which timeline the present day events will lead into, which also seems like an effort on Nicieza's part to cutdown on Cable's seeming omniscience, denying him the ability to do things because he knows how they turn out in the future, at least in part. 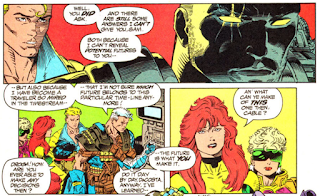 Cable also clears the air with Rictor and Sunspot, confirming that it was Stryfe sans helmet who killed Rictor's father (which we saw in Cable's limited series) and revealing to Sunspot that Gideon arranged for the death of his father. 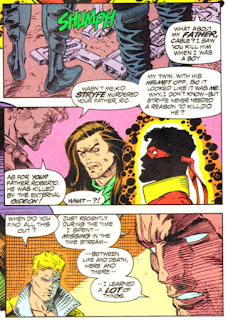 Exodus, who first appeared in X-Factor #92 but did little, returns here, operating as a kind of herald for Magneto (who he refers to as the "Harbinger of the Magnetic Storm" and later the "Overlord of the Fatal Attraction"). We see he has powers beyond the ability to fly (and holds his own against X-Force), but at this point, they remain vaguely energy based. 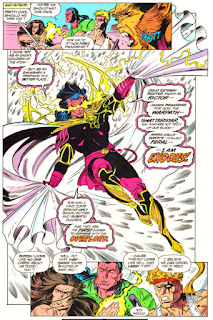 He refers to several characters by their real names, in the process establishing that Rictor's full name is Julian Esteban Richter and that Feral's name is Maria Callasantos.

Warpath at one point suggests that Exodus maybe Native American, but he will ultimately turn out to be more closely related to European Crusaders.

When Exodus says that Magneto is inviting Cannonball & Sunspot because they are the last remaining members of Xavier's second generation (ie the New Mutants), Cannonball asks about Wolfsbane and Karma, though Exodus' response about Karma being out of reach suggest that Nicieza is thinking of Dani Moonstar (who is in Asgard, as far as anyone knows, as opposed to Karma, who is presumably on Earth searching for her siblings). 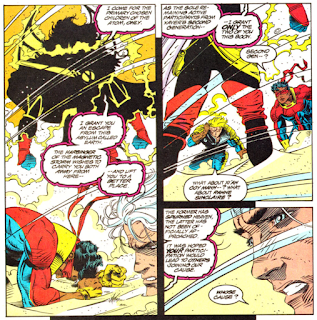 Magneto cures Rusty & Skids of their brainwashing in this issue, and they decide (of their own free will) to take Magneto up on his offer and stay on Avalon. They will later be seen amongst the Acolytes, so this effectively marks the point at which they join this group (though unlike their time with the MLF, they appear of their own minds in their next appearances). 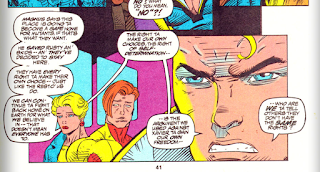 Two characters who have yet to appear in a story, Adam X (who will debut shortly in this year's X-Force annual) and Threnody (who technically appeared in Stryfe's Strike File and will make her in-story debut in X-Men #27) appear on Magneto's camera grid on the first page. 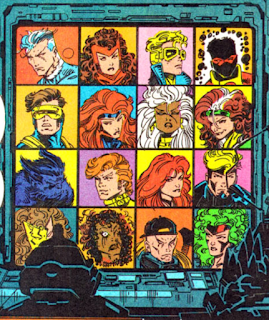 Like all chapters of "Fatal Attractions", this issue is double-sized with a hologram-enhanced gatefold cover. This issue, the hologram is of Cable. 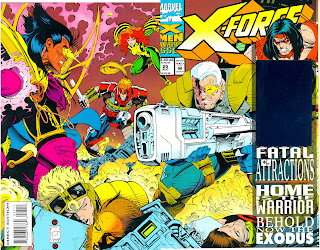 A Work in Progress
Considering it's in Arizona, the background for Camp Verde is so green, it seems more like the place is a country club.

Shatterstar notes that Feral's accent becomes more noticeable when she's agitated, and this marks one of the early inklings that the character is Hispanic.

Similarly, Shatterstar's dialogue gets peppered with bits highlighting his alien nature, such as when he refers to Cable dying as being "cancelled", and uses slang terms like "fekt" and "foojkes".

Cable admits that he needs X-Force far more than they need him, a reversal of the earlier issues in which the team were little more than soldiers to Cable. 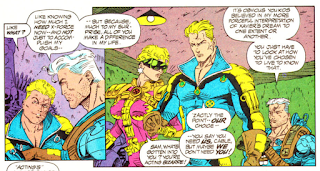 Subsequently, he and Cannonball have a nice moment together. 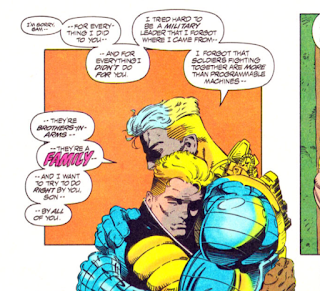 Cable equates Rusty & Skids' brainwashing as what happened to his son Tyler, and admits to Sam he lied to him earlier about his relationship to Tyler. 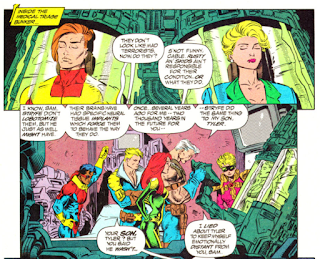 Siryn notes that Cannonball may have become the best of all his teachers. 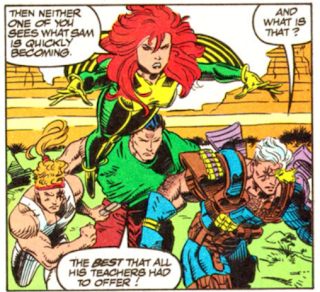 Cable notes that Rusty & Skids got him involved with the New Mutants, a reference to his first appearance when he fought the MLF and Freedom Force in order to rescue them.

Artistic Achievements
The art in this issue is shaky at time, no doubt in part due to the bevy of inkers working on it (brought in, presumably, because the book was running behind, on top of being double-sized), though Capullo's pencils throughout maintain a certain consistency throughout.

Austin's Analysis
Despite technically being part of a 30th anniversary crossover event, one which introduces a new base of operations for Magneto, gives the first lines of dialogue to his new lackey (introduced in the previous chapter of the crossover), and actually fully depicts a returned Magneto, in all his glory, this issue still is firmly an X-Force story first and foremost, and in a lot of ways, it's the culmination of Nicieza's efforts to transform/redeem the title from its earliest Liefeldian days. It started shortly before "X-Cutioner's Song", as Cable was cleaved off from the team (after Liefeld also left, of course), and kicked into high gear with the philosophical argument in issue #19, as Cannonball worked to establish just what X-Force meant in relation to the other X-teams. The last half dozen issues showed what a Cable-less X-Force, led by Cannonball and his "do good by hitting hard" philosophy looked like. Now here, Nicieza brings Cable back into the fold, in the process highlighting the changes in the series since he left, and confirming Cannonball as the team's true visionary, with Cable showing a fair amount of deference to him. X-Force is no longer Cable's group of hand-picked soldiers. It is now a full-fledged team, with a specific worldview on how to handle human/mutant relations, of which Cable happens to be a member.

As such, this issue also serves more or less as Cannonball's coronation as the true heart of the team and the best person to lead it. One of the things I love about this issue is the way it continues something Nicieza brought up in issue #19: how Cannonball (and to a lesser extent, Sunspot) is the product of three unique teachers in Xavier, Magneto and Cable, and has been molded in different ways by each of them, the end result being a representation of the best of their respective outlooks and methods. In the process, Niceiza also continues his post-Liefeld trend of honoring this series' history as the former New Mutants instead of running from it, and this issue in particular is steeped in callbacks to New Mutants history, from the presence of Rusty & Skids, to name-checking Karma and Wolfsbane, to Cable's history with Sunspot & Rictor.

If it falters anywhere, it's in failing to more distinctly separate Magneto's philosophy from Cable's. Claremont's Magneto, even at the end of his run and certainly during his tenure as the New Mutants' headmaster, wasn't too far removed from the new kinder, gentler Cable presented here, so it's harder to know exactly why the pair are fighting and just how their philosophies differ (later chapters of this crossover will, of course, make it clear that Magneto has...backpedaled from his more measured pre-death outlook). But while the Cable/Magneto fight is clearly meant to be the centerpiece climax of this chapter of "Fatal Attractions", this issue is really about cementing Cannonball's place as X-Force's leader, and cementing the series as an extension, rather than repudiation, of the old New Mutants book, and in both regards, it succeeds swimmingly.

Next Issue
Tomorrow, the sad Alan Davis-less era of Excalibur begins in Excalibur #68. Next week, Cable #4.