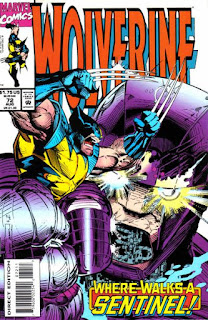 In a Nutshell
Wolverine & Jubilee encounter a revived Sentinel in the Outback.

Plot
Wolverine & Jubilee explore the X-Men's old Outback base, discovering the remains of the Reavers and Fitzroy's Sentinels. As they expand their search outside, looking for Gateway, one of the Sentinels activates and uses Spiral's remaining equipment to repair itself. Outside, Wolverine & Jubilee discover Gateway missing, but a groove from his bullroarer remaining. When Jubilee touches it, she suddenly finds herself back in her parent's house, before they died, and realizes they were actually murdered by two hired goons sent to kill Jubilee's neighbors. As Wolverine pulls her back to the present, the activated Sentinel approaches them, declaring that it has overrode its prime directive to protect humans and intends to use the temporal vortex to make the world better for Sentinels by eradicating humanity. When Wolverine moves to stop him, the Sentinel grabs Jubilee, telling Wolverine that if he attacks, the Sentinel will snap her neck.

Firsts and Other Notables
This issue finds Wolverine & Jubilee back in the X-Men's old Australian base, following up on the death of the Reavers in Uncanny X-Men #281, the first time their deaths have really been acknowledged since it happened (it's unclear how the X-Men learned about it, though perhaps Fitzroy bragged about it at some point). 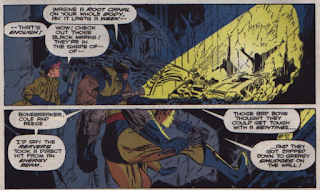 Along the way, Wolverine name drops the various characters who have come through the base, including Spiral, Albert & Elsie Dee and Lady Deathstrike, which serves to remind that she has yet to appear since Uncanny #281, when Cylla pushed her out of the way of a Sentinel blast (the MCP lists her as appearing in issue #55, but I have no recollection of that, and my review of the issue doesn't mention her). Of course, we know Cylla survived (she did appear in #55), so it stands to reason Deathstrike did as well (and she'll pop up in this series shortly), but Wolverine doesn't know that at this point. 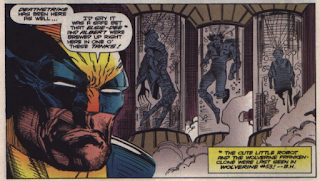 They also look for Gateway, only to find him missing, but with a remnant of his bullroarer left in place. Gateway is another character who was fairly significant to the X-Men at one point time but who got left behind by the "Dissolution & Rebirth" storyline, the linewide relaunch, and Claremont's departure, but he won't appear again until early issues of Generation X. 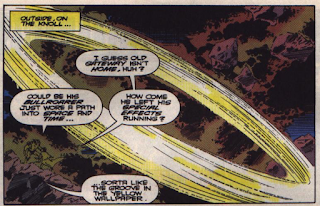 Jubilee's parents, previously mentioned as being dead, appear for the first time in this issue, and it's revealed that they were murdered accidentally (staged to look like a car accident), because the hired killers mistook them for the Lees who lived next door. 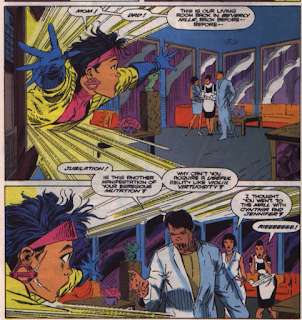 The hired killers are Reno & Molokai, who first appeared in issue #38 working for the gangster whose casinos were being robbed by Albert. 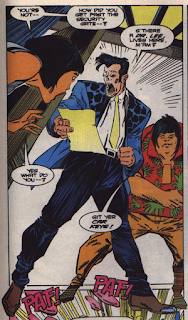 A Work in Progress
When Jubilee travels back in time via Gateway's bullroarer residue, it's revealed that her past self disappeared from the car she was riding in at the moment her future self appeared in the past. The sentient Sentinel says this is because reality was correcting itself, since there were two Jubilees in the same temporal zone, but that isn't really consistent with how time travel has been shown to work previously (for example, logic like that would preclude Cable being Cyclop's son, because both co-existed in the same time before Nathan was sent to the future). 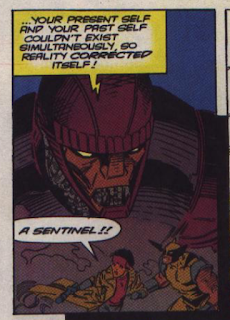 Pun with Peter Larry
There's a really bad joke in which Wolverine uses the word "loquacious" and Jubilee thinks he's referring to a kumquat-like fruit. 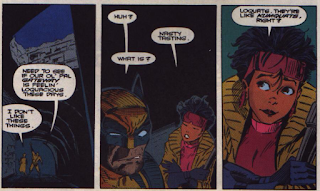 The Best There is at What He Does
Wolverine notes that his healing factor is capable of regenerating his insides (though the pain isn't always worth it). 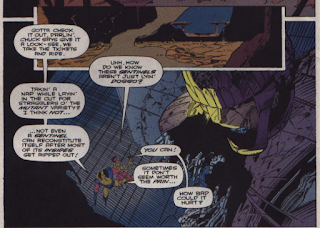 Human/Mutant Relations
When young Jubilee disappears and reappears inside the car, the mother of her friend who is driving worries that Jubilee might be one of those dangerous mutants.

Austin's Analysis
As with the start to the previous story, Hama kicks off this one by following up on a plot thread cribbed from X-Men, bringing Wolverine & Jubilee back to the X-Men's old base to follow-up on the slaughter of the Reavers (sidenote: I really like the idea, here and in the previous story, of Wolverine as Xavier's on-the-DL investigator/tier-up-of-loose-ends operative, and using this series to showcase those kinds of adventures, but the idea will unfortunately get sidelined by significant upcoming events). It's really the first time any of the X-books have acknowledged the complete eradication of character who were the X-Men's chief antagonists for a good chunk of issues, and having Wolverine & Jubilee (whose relationship was formed in battle against the Reavers) be the ones to do it is smart.

Meanwhile, Hama also uses this issue to start exploring Jubilee's past. While Scott Lobdell has been doing some great work with the character over in Uncanny, no writer has yet to really dive into Jubilee's past, despite her relatively-open-ended but also drama-ready backstory. The end result is somewhat mixed (all the time travel stuff here kind of distracts from the raw emotion of what happened), but it serves as a much-appreciated showcase for Jubilee, who has been a fixture in this series for some time now, just as events are about to occur which will sideline her from the series more or less for good.