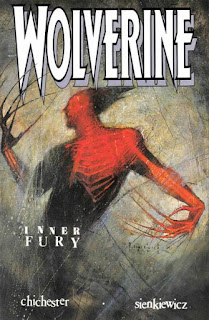 In a Nutshell
Wolverine gets infected with nanites that turn his healing factor against him.

Plot
A Hydra scientist named the Whale breaks off from the group with the nano-technology he had been working on, but is pursued by the co-leader of the project. Later, SHIELD alerts Wolverine that they picked up a Hydra courier with a communique containing his name. Nick Fury cautions against Wolverine investigating, saying it's clearly a trap, but Wolverine insists on springingit. He is subsequently attacked by a group of Hydra soldiers, and gets infected with the nanotechnology, but he manages to kill all the soldiers except for one, who is finished off by someone named Mr. Big. Mr. Big tells Wolverine that the nanites are affecting his healing factor, causing it to reject the adamantium in his body. As the adamantium begins to leak out of his body, Wolverine and Mr. Big track down the Whale, after which it's revealed that Mr. Big is Hydra as well, the co-leader of the project with Whale. His healing factor too overtaxed for him to fight, Wolverine "reboots" his power by stabbing himself in the head with his claws, forcing it to prioritize healing that injury instead of rejecting the adamantium. When he regains consciousness, he kills Mr. Big, and then promises the Whale, who was genuinely only interested in exploring science and got tricked into working with Hydra, that he'll help him get in touch with Reed Richards or some other super-scientist.

Firsts and Other Notables
This is a square bound prestige book, fully illustrated by former New Mutants penciller Bill Sienkiewicz, in full-on experiemental mode. It is written by D.K Chichester who, among other things, wrote the "Wolverine fights evil loggers" fill-in story in Wolverine #58-59.

The crux of this issue hinges on the notion of Wolverine becoming infected with experimental nanobots which cause his healing factor to treat the adamantium in his body like an infection and try to remove it from his body, which is noteworthy mostly because it somewhat anticipates the big event set to occur at the end of "Fatal Attractions", as well as later reveals regarding the relationship between Wolverine's healing factor and the metal in his body. 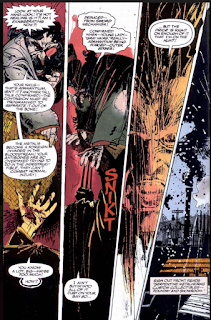 This issue introduces a Hydra scientist named the Whale (who prefers to be called the Shark), who wears a containment suit to keep himself alive, as well as his boss, the diminutive Mr. Big, though neither have yet to appear outside this story. 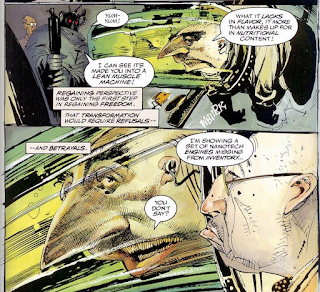 The Chronology Corner
Not that it really matters because it's mostly context free, but this story takes place between issues #68 and #69 of Wolverine, and between Wolverine's appearances in X-Men #19 and Uncanny X-Men #300

The Reference Section
Wolverine alludes to the film Highlander, in which a race of immortals battle one another for supremacy and can only be killed via decapitation. 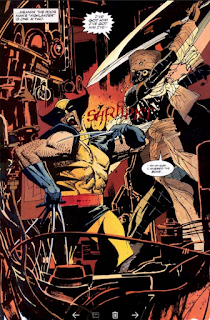 Austin's Analysis
It does not bode well that we're only into the early 90s and I'm already sick of prestige, context-free Wolverine one-shots. The big sell of this particular one is Bill Sienkiewicz's art, and while some of it is certainly nice on a page-by-page basis, it's kind of terrible in terms of storytelling, which makes a fairly straightforward plot seem more complicated than it is. It also doesn't help that the story is populated almost entirely with new characters, with even pre-existing types of characters completely redesigned (Hydra here looks nothing like Hydra anywhere else; at one point Wolverine fights what an online summary tells me is a Hydra goon who looks nothing like any Hydra goon we've ever seen before - it's the guy in the Highlander screen cap above). The central gimmick - that Wolverine's skeleton is erupting from his body - is somewhat intriguing in light of what's coming in "Fatal Attractions" as a kind of thematic precursor, but that seems entirely coincidental, with most of the adamantium body-horror stuff (when not obscured by the art) instead just seeming like an excuse for Sienkiewicz to go nuts.