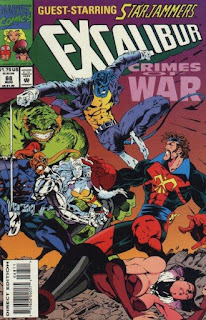 In a Nutshell
The Starjammers come to Earth looking to arrest Cerise.

Plot
Upon returning from the future, Excalibur mourns the loss of Captain Britain, to the dismay of Micromax, who is trying to organize a training session for the team. Only Kylun takes him up on his offer, but as they spar on the grounds outside Braddock Manor, they are attacked by the Starjammers. With the rest of the team responding to the attack, Corsair explains that they've come to arrest a Shi'ar fugitive. Excalibur, believing he means Phoenix, attack the Starjammers, and in the course of the fight it's revealed that the Starjammers are actually after Cerise, who emerges from the mansion wearing her armor and agreeing to go with the Starjammers, tearfully telling Nightcrawler that Corsair is right about her. But after the Starjammers & Cerise depart via stargate, Phoenix repowers the gate. Leaving Kitty behind to watch over Feron & Meggan, Nightcrawler leads the rest through the gate, determined to rescue Cerise.

Firsts and Other Notables
As of this issue, the series has been moved into the X-office, with Suzanne Gaffney (Bob Harras' longtime assistant - she cameoed in Uncanny X-Men #272 being interviewed about the X-Men) taking over from Terry Kavanagh (who stepped down as an editor to become a freelance writer around this time). As a result of this move, the series will begin to more closely associate with the X-books, participating in the linewide crossovers for the first time, featuring more guest appearances from characters in other books more regularly, etc. and will shortly adopt a new status quo that reflects the book becoming more of an extension of the X-Men franchise in a way it never really has before.

Unfortunately, this move into the X-office also occurs during a period of creative upheaval, with Alan Davis gone, leaving the series not in the hands of one of its two creators (barring fill-ins) for the first time in its history, and with no clear artistic team in place to takeover long term. Scott Lobdell is credited as plotter this issue, with future Spider-Man impresario Dan Slott scripting (a similar situation to X-Factor, with DeMatteis scripting Lobdell's plots), and moving ahead, Lobdell will trade off plotting and scripting duties with a variety of writers (most often Richard Ashford) until the start of Warren Ellis' run in issue #85, giving the series a long stretch without a consistent creative voice.

This issue begins with Meggan and the rest of Excalibur mourning the loss of Captain Britain, who was "lost in the timestream" between issues (a footnote rather flippantly assures readers they haven't missed an issue, but rather too much stuff is going on to show it all, which, come on, is no one's fault but the creators/editors). The character will remain absent through issue #75, at which point he'll be rescued from the timestream but adopt the moniker Britannic, along with a new demeanor. The story usually goes that Cap was removed from the book and transformed into Britannic because Marvel wanted to launch a new Captain Britain as part of their Marvel UK line (and didn't want two Captain Britains running around), but that story was recently debunked, with Lobdell saying he was simply trying to emulate the series' "anything goes" approach by doing something different with the character. 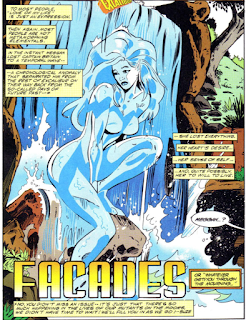 As the issue opens, Micromax is trying to organize a training session with the team, and while the character has been hanging around for the last few issues, it seems that if we were to declare any issue as being the one where he officially joins the team, it would probably be this one (not that he'll be sticking around long). 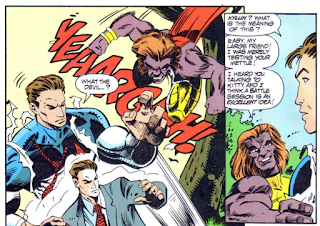 Cerise is revealed to be Shi'ar this issue, and bearing that news are the guest-starring Starjammers last seen (by us) in Avengers #350-351 (and in the overall Marvel Universe in the "Troyjan War" Hulk storyline). Their appearance here is a bit odd, as they're more or less acting as bounty hunters for the Shi'ar (which, yes, the group has been much more "official" since Lilandra became empress again, but that still seems at odds with their pirate-y roots), and Nightcrawler reacts like they're after Rachel (in order to setup the misunderstanding fight), even though it was the Imperial Guard, not the Starjammers, who fought the X-Men over Phoenix. 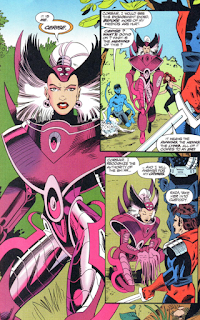 Creator Central
Steve Buccellato, who's popped up in various X-books of late as a colorist, draws this issue. I'm not sure if this is his first and/or only pencil work, but it's the first time I've come across it, and it's pretty terrible.

Joe Madureira provides the cover for this issue, and while it's nothing to write home about, it still feels a bit like polishing a turd relative to the interior art.

The Chronology Corner
This issue (and the rest through #70) all take place before Kitty's appearances in Uncanny X-Men #302 & #303, and thus, before the death of Illyana. Kitty is seen here reacting to the news that Illyana is sick, somewhat contradicting the notion, said in Uncanny #302, that she rushed to the mansion as soon as she heard, considering she actually waits three issues before doing so. 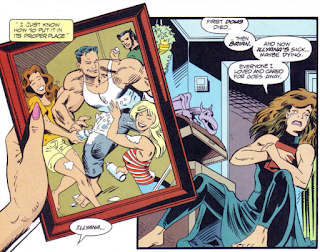 A Work in Progress
Micromax notes that everyone on the team seems obsessed with death, and while that seems a little contrary to the series' more light-hearted tone, Kylun's genuinely-funny rebuke to the notion that he's an exception to that rule is in keeping with the series' more humorous tendencies. 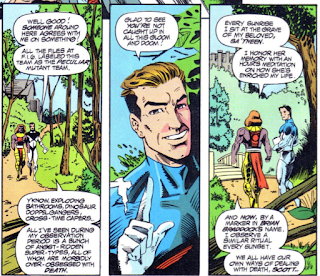 Kitty & Feron share a moment in which Feron, trying to be less of an ass, is genuinely empathetic. 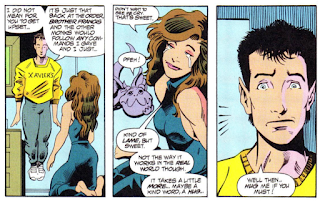 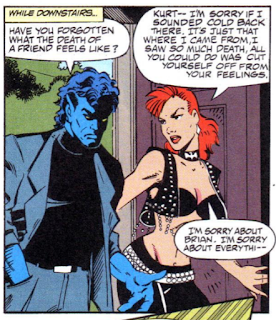 For Sale
There's a full-on ad (as opposed to a teaser) for the Mortal Kombat console game, featuring the characters in all their 3D-rendered glory. 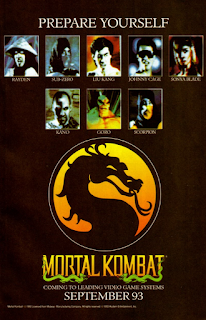 The Entertainment This Month ad features the upcoming X-Men 2099, the X-books' contribution to Marvel's future-set 2099 line. 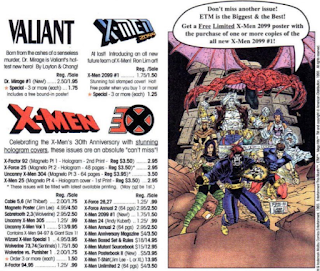 Bullpen Bulletins
Scott Lobdell is announced as the new writer of this series, though that isn't entirely accurate (he'll have help of some sort or another on most of his issues).

Austin's Analysis
While it's fair to say that nearly any artist following in Alan Davis' footsteps, regular or fill-in, is going to suffer in comparison, editorial hardly puts their best foot forward with the art in this issue, which barely manages to meet basic standards of professionalism. Art aside, while much of what happens here is intriguing in principle, it's hard to get too excited by it with the benefit of hindsight. While Captain Britain's off-page departure is abrupt (to put it mildly), the focus on the "second tier" members of the team - Cerise, Feron, Kylun & Micromax - most of whom rarely get featured next to the "main" members, is much appreciated. And building a story around Cerise, the one character of those four who has been featured the most (thanks to her relationship with Nightcrawler) but whose background remains woefully underdeveloped, makes sense. But it's hard to get too excited about any of this, knowing it's all ultimately in service of writing Cerise, and the rest of the "second tier" members, out of the book, more or less for good.

Next Issue
Next week, Cable reunites with the Six Pack in Cable #4.
Newer Post Older Post Home
Posted by Austin Gorton at 12:00 PM