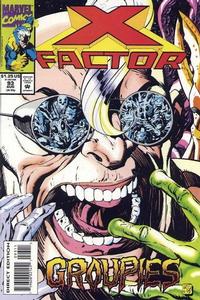 In a Nutshell
X-Factor deals with the death of Illyana while Forge is appointed their new government liaison.

Plot
Havok & Wolfsbane arrive at the X-Mansion, and express their condolences for Illyana's death to a stone-faced Colossus before being taken to Professor X. Meanwhile, Polaris & Quicksilver try on their new X-Factor uniforms while Guido is teleported away by Lila Cheney. At the X-Mansion, Havok plays handball with his brother, while Xavier gives Wolfsbane the bad news that he can't cure her mental conditioning telepathically, without risking her ending up stuck as a mindless mutate. Someplace far away, Guido finds himself in front of an alien crowd during one of Lila's concerts, and demands that she take him him, turning down her offer to return as her bodyguard and live a life of luxury, much to her dismay. Back at X-Factor headquarters, Quicksilver reluctantly accepts his new costume after shedding it of some unnecessary accessories, while at the pentagon, Val Cooper meets with X-Factor's new government liaison: Forge.

Firsts and Other Notables
This issue ends with Val stepping down as X-Factor's government liaison (though she remains part of the government oversight group that runs the team) in the wake of last issue's events, handing over the reigns to Forge (who says he used his political clout to get the job). This marks a return to a regular role in one of the X-books for Forge (after leaving the X-Men in Uncanny #290 and his string of regular guest appearances in issues #299-302), and he will remain a regular fixture in this series more or less until its end. Val, meanwhile, will stick around as well (albeit less regularly) for some time as well. 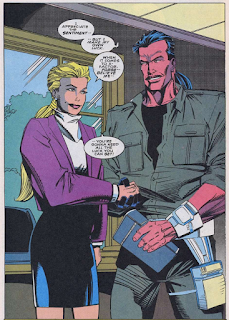 An editorial note on the letter's page announces Joe Quesada's departure from the series, and promises that fans will love the top-notch new artist they have lined up (which, if they mean Jan Duursema, is a bit misleading; I mean, I like her art fine, but her style would hardly placate anyone mad about Quesada's departure, and she won't actually work on the series for the first time until issue #97).

Both Polaris and Quicksilver receive new costumes in this issue, the former said to be caused by the government finding her recent gold one too provocative (which may be an in-universe reference to some fan or editorial responses to it), while the latter is a payoff to a frequent demand in the letters page to put Quicksilver into a team uniform. I was never that worked up about Quicksilver's uniform, but Polaris' new one manages to echo her gold one while still matching the general look of her teammates', which is nice. 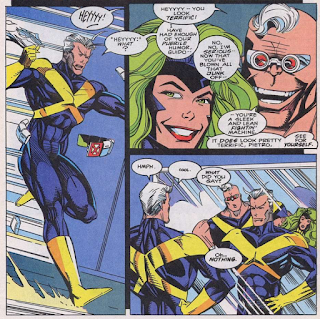 Madrox is noticeably sullen, sitting in the dark and leaving a dupe to speak for him. Polaris attributes it to his killing of Mellencamp the previous issue, but we'll soon learn he's always sick with the Legacy Virus. 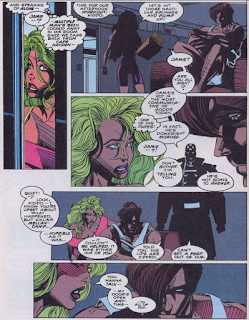 Lila Cheney, fresh off her appearances in X-Force, pops up in this issue, attempting to hire Guido back as her manager. Like her X-Force appearances, it's an appreciated nod to the characters histories together, but the disdain with which she greets Guido's desire to stay with X-Factor seems a little out of character (she also mentions that she heard about Illyana's death, another nice touch given that the two characters went on at least a couple adventures together). 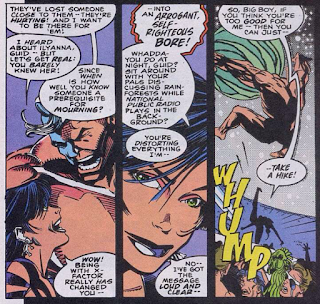 In light of recent revelations regarding her condition, Rahne requests a leave of absence from the team in order to seek treatment at Muir Island, but she won't actually be missing from the series much at all. 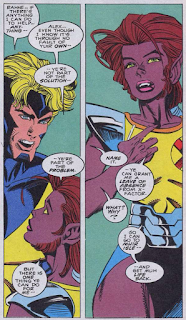 A Work in Progress
Echoing his non-reaction to Illyana's death in Uncanny #303, here Colossus is stone-faced to the point of worrying his friends. 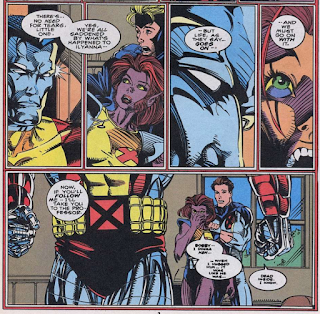 Archangel psychoanalyzes him a bit, and when Iceman asks what makes him an authority, he responds by pointing out all the crap he went through becoming Archangel. 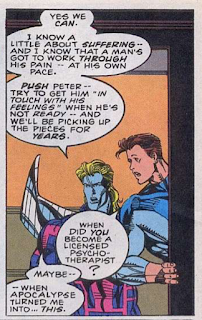 Polaris notes how, after having spent so much time under the mental control of someone else, she enjoys being by herself.

In an odd bit of scripting, Cyclops throws a bunch of leadership cliches at Havok, then Havok hangs a lampshade on it. 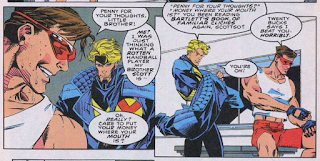 Cyclops and Havok play handball together in the Danger Room. 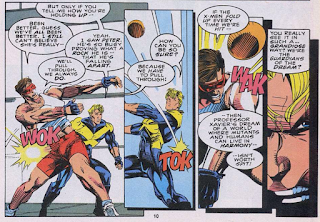 In discussing Rahne's condition, Xavier notes that Rahne's brain has been physically changed as a result of her maintaining her half-wolf, half-human form for so long. 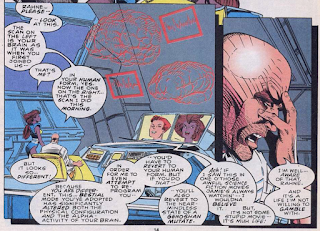 Havok learns about the existence of Xavier's Mutant Underground, though not much else about it. 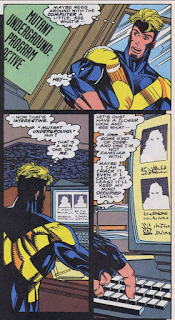 Pun with Peter J.M
Colossus' method of grieving does lead to one amusing bit, in which he responds to everyone talking about how he's doing by pointing out his hearing still works fine. 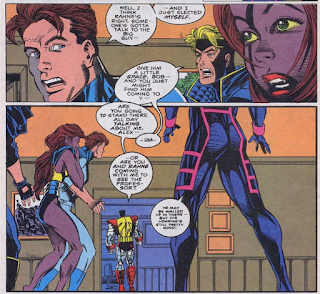 The Grim 'n' Gritty 90s
When Lila teleports into Guido's shower, he calls out "Sean?", a reference to the series' previous jokes about his relationship with actress Sean Young.

Quicksilver's costume initially comes with a bunch of belts and pouches, which Guido insists aren't meant to be functional, merely cool, which seems like a pretty large wink at 90s costuming trends. 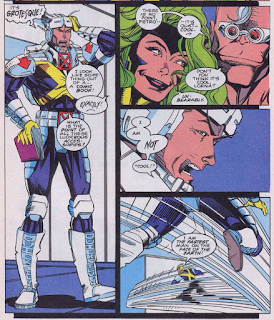 Artistic Achievements
The cutaway to Val & Forge's meeting at the Pentagon does that old school thing where a black-and-white photo of the actual place is used in place of a drawing. Not sure why.

Austin's Analysis
J.M. DeMatteis has a reputation for writing character-focused, psychologically-driven tales, and this issue, plotted by Scott Lobdell (and in the vein of Lobdell's quieter issues; the only action in this issue comes via Guido fighting off some of Lila's more overzealous fans), plays to that strength. It takes as its immediate impetus Illyana's death in Uncanny #303 - which, all else aside, is an appreciated acknowledgement of Wolfsbane's history with the character - but the focus remains squarely on X-Factor, with every member of the team receiving attention (morose Madrox gets shortchanged the most, but that also works to highlight just how uncharacteristically depressed he is). Some of it is standard material for the series, like Rahne's ongoing struggle with the Genoshan modifications to her mind and Quicksilver's general anger issues, but some of it also takes the characters in interesting directions: Havok & Cyclops conversation is less about Havok living up to his brother's reputation and more about their roles as protector's of Xavier's dream, while Guido is given a chance to officially repudiate his old lifestyle and affirm his affection for and place within the team. The scripting isn't quite as quippy or punny as under Peter David, but given the somber tone that starts the issue (and Madrox's ongoing crises) that's more understandable than not, and the issue nevertheless stands alongside the more character-centric focus David gave the series from the beginning, and which had been lacking off late.