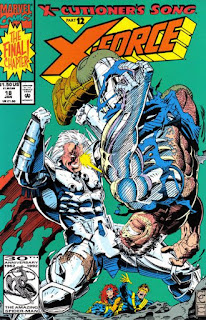 "Ghosts in the Machine"
February 1993

In a Nutshell
Cable & Stryfe die as "X-Cutioner's Song" ends.

Plot
Cable confronts Stryfe on the surface of the moon, while inside Stryfe's base, Psylocke detects that Apocalypse is dying, leading Archangel to search him out. He finds Apocalypse near death, but refuses to give him a quick, dignified end. Outside, Stryfe easily overpowers Cable, but is suddenly blasted by Havok. His attack destroys Stryfe's armor and weakens his hold on Cyclops & Jean Grey, who join the fray. Enraged, Stryfe destroys his tower, filling the area with temporal and electro-magnetic energy. Cable rigs a device to his bionic arm and gives the button to Cyclops, then launches himself at Stryfe. As he does so, he begins the self-destruct sequence on his arm, then urges Cyclops to push the button. As Cable's arm begins to explode, Cyclops reluctantly does so, triggering an explosion that combines with Cable's and the energy swirling from Stryfe's tower, creating a vortex that sucks in both Cable & Stryfe. Cyclops, Jean & Havok are joined by the rest of the X-Men on the moon as Cyclops considers whether he's just sacrificed his son a second time. Meanwhile, Mr. Sinister's associate Gordon opens the canister Sinister received from Stryfe, only to discover it empty. Sinister is hardly surprised, and as he leaves, he tells Gordon to look after his cough...

Firsts and Other Notables
As the climax to "X-Cutioner's Song", both Cable & Stryfe disappear at the end of this issue, and both are considered dead moving forward. Both, of course, will return, though Cable will be back significantly sooner (in just a few months, via his solo series; he will be re-united with X-Force in issue #25). Stryfe comes back long enough to settle the issue of who is the clone and who is the original Nathan Christopher, but then returns to being dead. He'll make a couple more brief returns after that, but for the most part, this marks the end of Stryfe's tenure as a significant, recurring villain, and the high water mark of his character history. 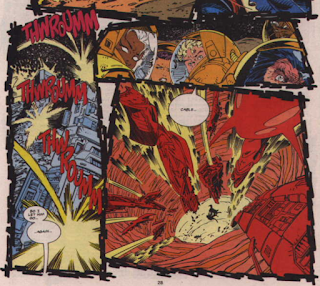 In addition to the deaths (or "deaths", if you prefer) of Cable & Stryfe, this issue also represents the beginning of the almost-neverending Legacy Virus plotline that will weave itself through various X-books over the next couple of years, then sort of hang quietly in the background, unresolved, for a few more, before eventually getting dealt with prior to the start of Grant Morrison's run. Nothing is overtly established here, as the threat of the virus will be slowly revealed over the next few months, but in hindsight, Stryfe's declaration that his legacy is a pox on mutantkind is fairly telling. 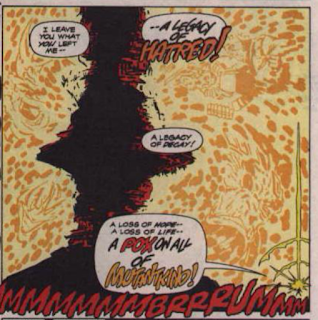 We also see Mr. Sinister coming into contact with the virus, as his hench-scientist Gordon is coughing rather conspicuously as he opens the container Sinister received from Stryfe as payment for kidnapping Cyclops & Jean Grey (which is said here to contain Summers family material), only to discover it is empty. 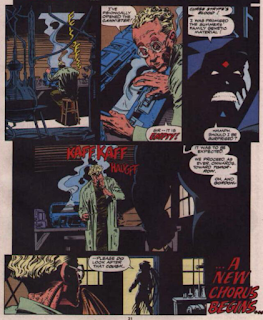 Stryfe refers to Cable as "Nathan Dayspring Askani'son", which is, I believe, the first time all those names have put together in the manner in which they'll appear on the back of his trading cards going forward.

While the exact nature of the relationship between Cable & Stryfe remains, by issue's end, frustratingly unresolved, there's definite hints throughout that Stryfe is the original and Cable the clone (which is what Nicieza and/or Lobdell originally wanted to do), including Stryfe referring to Cable as a failed attempt to preserve a life (ie a flawed clone), dialogue which unfolds in front of images of Baby Nathan being taken into the future by Askani. 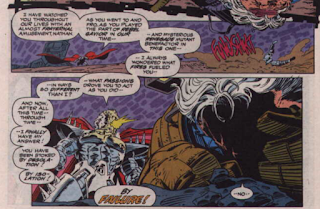 The question of whether Cable/Stryfe is Nathan Christopher is also, technically, unanswered, in that it's not explicitly stated. However, as a capper to all the hints to that in previous chapters, this issue more or less confirms it without confirming, as Cyclops likens blowing up Cable & Stryfe at Cable's insistence here as letting him go a second time.

He also refers to sacrificing Cable a second time, so it's pretty clear that Cyclops, at least, believes Cable to be some form of his son, even if the story doesn't confirm that he's right for the readers. 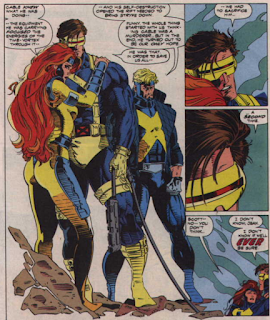 In the wake of his off-panel battle with the Dark Riders, Apocalypse is injured and on the brink of death. He is found by Archangel and begs for a clean death, but Archangel refuses, giving Archangel a somewhat cathartic moment that more or less puts to rest his recent angst. It's left up in the air as to whether Apocalypse survives, though he will of course be back. But this does mark the beginning of another long dry spell for the character, as he won't appear again until the run-up to "Onslaught" (in which he plays a fairly large part). Of course, that dry spell is interrupted by "Age of Apocalypse", which he obviously dominates, but technically that's an alternate Apocalypse to this one. 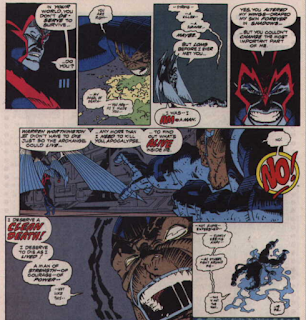 The final trading card of the crossover is of Stryfe. 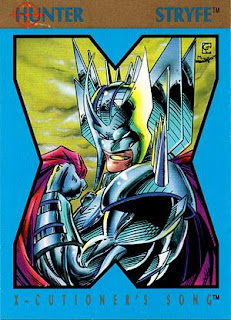 A Work in Progress
Stryfe refers to Cyclops & Jean as the "parents of tomorrow pain".

After beating up Apocalypse off-panel between issues, the Dark Riders escape from Stryfe's moonbase. With Stryfe now dead, they will essentially work for themselves for a time, carrying out Apocalypse's "cull the weak from the strong" edict on their own.

Their escape leads Wolverine to lash out about the X-Men's various setbacks of late, as he says they are always frustratingly one step behind, and he includes Mariko (but not Silver Fox) in the list of losses. 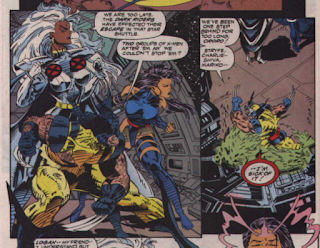 This issue confirms that Stryfe's force field is programmed to only let in people with Summers DNA. Havok makes a great joke about how it kicked him pretty hard for not being Cyclops, which is something he's pretty good at doing himself. 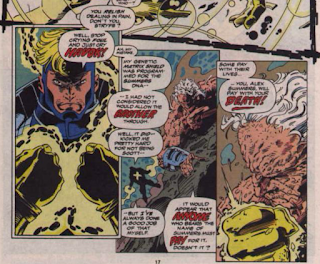 Mr. Sinister & Gordon are in Nebraska, presumably at or near the orphanage he ran which housed young Cyclops.

The Grim 'n' Gritty 90s
Cable's third action figure will sport the space suit he wears in the opening of this issue. 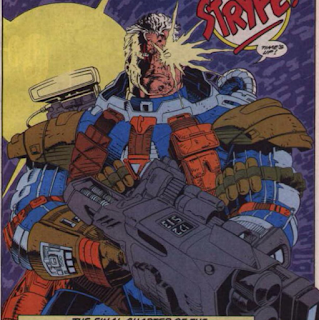 Artistic Achievements
This issue's montage of past events swirling around Stryfe's tower are a little less random, showing things more germane to Cable/Stryfe's history, like Madelyne Pryor and Askani taking baby Nathan into the future. 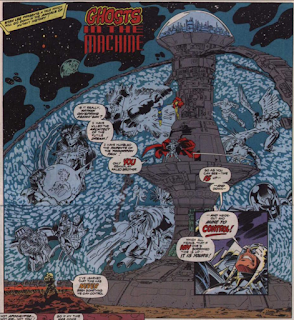 Capullo draws in a great little detail, little puffs of air being released as Stryfe removes his helmet. 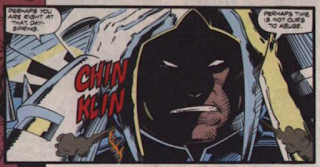 Austin's Analysis
And with that, "X-Cutioner's Song", really the last formally-constructed linewide crossover until "Messiah CompleX" in 2007, comes to a close. In the end, it takes off the board Cable (temporarily) and Stryfe (more or less for good) while also, it must be said, leaving much of its promises unfulfilled, as the exact relationship between Cable, Stryfe and Cyclops' son, as well as, especially, the relationship between Cable and Stryfe, remains unconfirmed. But despite all that,  this story as a whole still holds up pretty well (and I still maintain that while the question of whether Cable/Stryfe is Nathan Christopher isn't *explicitly* answered, it's pretty obvious that they are, in some way, especially by the end of this issue, with Cyclops talking about giving Cable up again and whatnot).

On the micro-level, it's well-plotted. There's a few between-issue hiccups (like Mr. Sinister going from "I want to kill Xavier!" to "I'm here to help the X-Men" between issues, or Apocalypse's somewhat chaotic movements between chapters in the story's second act), but for the most part, each chapter flows into the next, and each manages to advance the overall narrative in some way, such that no one chapter feels entirely throwaway. The twelve parts break down fairly easily into three acts (the kickoff and hunt for X-Force, taking down the MLF/Stryfe taking center stage, and the hunt for Stryfe and the conclusion), so even though the story is the long, it doesn't drag, since it's able to offer some smaller resolutions and changing circumstances along the way. And while the art isn't spectacular (Jae Lee is a love it/hate it guy, while Kubert's work is still a little rough around the edges), it is consistent, in that all four artists manage to complete all their assigned issues, and even with the more stylized Jae Lee art as an anomaly, the overall look of the story is remarkably consistent from chapter to chapter.

In terms of the bigger picture, while the story doesn't offer concrete conclusions about Cable & Stryfe in the end (the result of a last-minute editorial mandate made over the creators' heads), it does accomplish its mission of closing out the post-'91 relaunch "Image Era" of the X-books. X-Force is no longer completely isolated (and mostly aimless), Stryfe and the Mutant Liberation Front are no longer their chief foes, and though still an outlaw team, they will maintain an easier relationship with the X-Men going forward. The Blue/Gold split between the two X-Men titles will gradually fade away as a result of their mixing in this story (Colossus will feature heavily in the immediate issues of X-Men, while Gambit will soon pop up in Uncanny). Archangel's angst is more or less behind him (in part because of his interactions with Apocalypse in this chapter), while Bishop, having now helped the X-Men during a significant conflict/participated in a crossover, feels less like the new kid on the block. Only X-Factor remains mostly unchanged, but that series will soon undergo a massive change (to its detriment, unfortunately) as a direct result of this storyline.

So while "X-Cutioner's Song", in the end, fails to deliver the exact, long-promised answers about Cable & Stryfe, it succeeds in closing off a tumultuous chapter in the history of the X-Men, in the process laying the groundwork for the franchise's future post-Jim Lee, Rob Liefeld & While Portacio. That it does so more or less on the fly, with new or new-ish creators tackling these characters in some cases for the first time, and still manages to tell, in spite of its flaws, a cohesive, competent, and compelling story is a remarkable achievement, one which still holds up today.

Next Issue
Tomorrow: a story that does not hold up concludes in Excalibur #60. Next week, the "X-Cutioner's Song" epilogue tour begins, with Stryfe's Strike Files #1 and New Warriors #31.