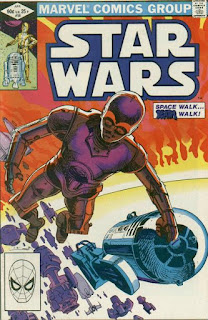 In a Nutshell
Threepio & Artoo race the clock to save the Rebel fleet.

Plot
As Luke, Lando & Chewbacca leave Arbra aboard the Falcon to rendezvous with a contact named Ferret, the rest of the Rebels prepare to hide the fleet from Imperial attention, a risky maneuver that involves placing the ships inside the corona of the planet's sun, protecting them inside a massive forcefield generator. Once the ships are safely protected in the sun, Leia and everyone but the maintenance crew of the generator prepare to leave aboard a shuttle. But Artoo detects a malfunction, and is left behind along with Threepio when the shuttle departs. The malfunction knocks out the crew, and when an Imperial patrol arrives in the system, Leia and and everyone aboard the shuttle are forced into hiding. Meanwhile, the Falcon arrives at Bazarre, a massive ship where they'll meet Ferret. Back inside Arbra's sun, Threepio & Artoo race against the clock to bypass the malfunction and save the Rebel fleet, while Luke & Lando are accosted onboard Bazarre by some of Ferret's men. Threepio & Artoo are ultimately successful, but then Leia learns that the Falcon isn't responding to any communications, as though it simply dropped out of existence.

Firsts and Other Notables
The plot of this issue hinges on the Rebel's plan to hide their fleet from Imperial attention in the star around which Arbra orbits, using a frankly massive system of connected generators to create a forcefield large enough to cover the fleet and strong enough to keep out the sun's heat, and also compensate for the sun's gravity. As a one-off kind of thing, it's clever and science-y in a fun way, but the equipment involved seems more on the level of an Imperial superweapon that the sort of thing the Alliance should have ready access to (I mean, if they can afford something like this, the conflict should be a lot less one-sided). 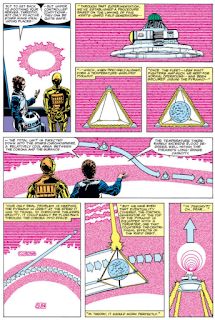 Lando, Luke and Chewbacca arrive on the massive ship Bazarre, seeking out someone named Ferret, a shady but established contact for the Alliance (though this is the first we're hearing of him). 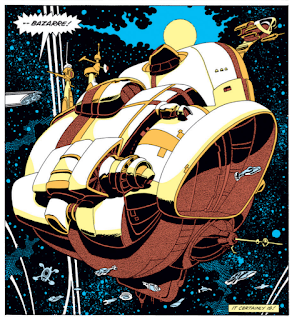 The Statement of Ownership in this issue lists the average number of copies of each issue sold over the previous twelve months to be 230,528 (down from the 256, 605 listed in issue #46), with the issue closest to filing date selling 200,448 copies (down from 227,005). So sales have dropped in the roughly year or so since the Empire adaptation, but the numbers are still quite good (and per the Statement of Ownership in the April '82 cover-dated issue of Uncanny X-Men, #156, X-Men is now outselling Star Wars, with a 259,607 average and 289,525 nearest).

A Work in Progress
In an appreciated break from Dejarik, Luke and Lando are shown to be playing a game called Novacrown aboard the Falcon. 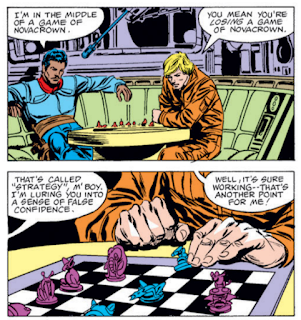 General Rieekan remains one of the Rebel's top officers.

Um, Actually
Artoo is forced to use his fire extinguisher attachment to propel him and Threepio through space; seems like his Prequel-era rockets would have come in handy there. 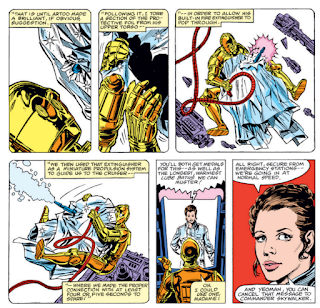 You Kiss Your Sister With That Mouth?
Leia continues to be wary of/jealous towards Shira's burgeoning relationship with Luke.

Threepio tells Artoo to "keep his shirt on". 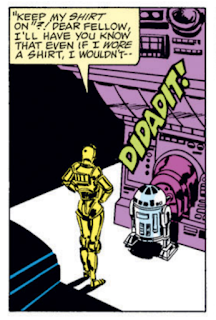 Austin's Analysis
In addition to continuing the series' overall narrative outside the immediate plot, here showing the ongoing development of the Rebel base on Arbra, additional Leia/Shira tension, and setting up the next issue via the Luke/Lando/Chewie subplot, this is an interesting issue in that the central conflict is essentially a man vs. nature (or technology) story. with the Threepio & Artoo working to fix a technical problem endangering the Rebel fleet and nary an Imperial in sight (a patrol does show up in-system in the middle of the crisis, but that's more about adding to the existing tension than a conflict in its own right; the Rebels never engage the Imperials directly). Not only is it a clever way to shake up the usual Rebel vs. Imperial routine, but it's also an effective showcase for the droids, giving them a chance to save the day in a reasonable (and in Threepio's case, less-annoying-than-usual) fashion.

Next Issue
Luke & Lando in the hands of Ferret.