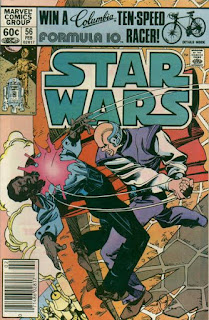 In a Nutshell
Lando fights to save Cloud City.

Plot
Investigating the deserted Cloud City, Lando is attacked by a deranged Lobot, raving about a danger to the city, while an Imperial bomb disposal unit led by Captain Treece arrives. Believing them to be the danger referenced by Lobot, Lando arranges for Lobot to attack the Imperials. Meanwhile, Leia returns from a scouting mission on Arbra to learn that Lando hasn't reported in from Bespin, so Luke and fellow pilot Shira Brie are going to investigate. Back on Bespin, a bomb detonates in the city, and in the aftermath, Lando learns from Treece that the city was evacuated due to bomb threats made by disgruntled Ugnaughts, and that eleven bombs remain. Agreeing to a truce, Lando & Treece work together to reprogram Lobot, who in turn manages to defuse the remaining bombs. With the crisis averted, Lando suggests Treece consider treating the Ugnaughts with the same consideration he used to, at which point Treece declares their truce over and kicks Lando over the side of the city.

Firsts and Other Notables
This issue marks the first appearance of Shira Bree (spelled "Brei" here), shown to be a fellow pilot and potential love interest for Luke, who will make multiple appearances in the series, eventually becoming the Dark Lady of the Sith, Lumiya  and one of this series' longest-lasting recurring villains (I don't know if Michelinie & Simonson had her eventual heel turn planned from the start, or if that's something they developed later). Thanks to her later role as the central villain of the "Legacy of the Force" series of novels in the 00s, she is the original character from this series with which I was most familiar prior to reading this series for the first time. 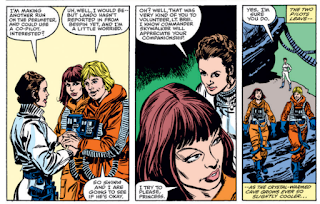 Lando's aide-de-camp from Empire, Lobot, returns this issue, though for most of the issue, he's in a deranged state trying to kill Lando. 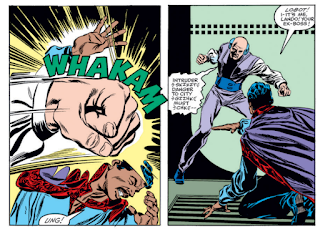 This issue debuts a weird looking Imperial troop transport that I don't think ever appears anywhere else. There's also a new specialty of Stormtrooper introduced, bomb troopers, that look a bit like the Snowtroopers. 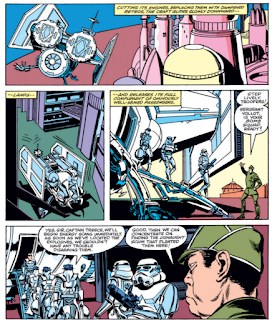 Creator Central
Walt Simonson gets co-plotting credit on this issue for the first time, as does his wife, editor Louise Jones.

A Work in Progress
The new rebel base on Arbra is coming along nicely. 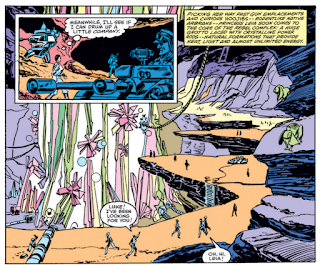 Lobot is shown to be able to telekinetically control electronic circuits, a skill attributed to his being a cyborg, something that doesn't really get referenced before or after this by any other cyborgs (like Valance) in the Star Wars universe.

Lobot is periodically referred to as "the Lobot" this issue, though "Lobot" is his name and not a generic name (like "droid"). 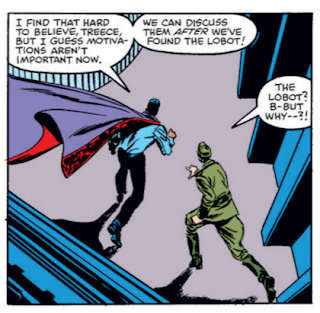 The denizens of Cloud City are said to have been evacuated to Bespin in the wake of the Ugnaughts' threats, and the Ugnaughts are angry because they want to return to Bespin to mine there themselves; however, Bespin is a gas giant, with no physical surface to mine or seek refuge on. 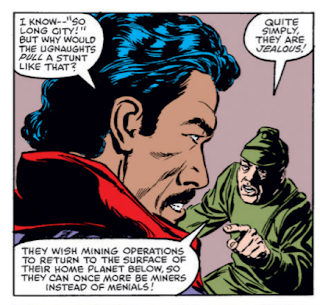 Remember The Empire Strikes Back?
Lando uses the carbon freezing chamber where Han was frozen against some Stormtroopers.

After defeating them, he declares "that one's for you, Han!" which I'm sure Han appreciates even more than he would, you know, being rescued and unfrozen. 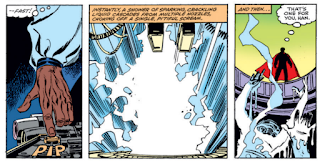 You Kiss Your Sister With That Mouth?
Despite Han still being frozen in carbonite and at the mercy of Boba Fett/Jabba the Hutt, Leia seems jealous of Shira.

Austin's Analysis
Han's fate at the end of Empire isn't just problematic for this series in terms of sidelining Han from any future stories (barring flashbacks or dream sequences) until his fate is revealed in Return of the Jedi, but also in the way it affects (or should affect) the remaining characters. Han is Luke and Chewbacca's buddy, Leia's love interest, and the chief motivation for Lando's continued involvement with the Rebels. All four have a vested interest in finding Han/rescuing him from Boba Fett/Jabba, with all other concerns (outside of something significant, like the Tarkin project in issues #51-52) secondary to that. Of course, the series can't actually have the characters succeed or even get close to it (at least not for awhile), so it's left with two options: turn Han into Poochy, with the characters constantly wondering where he is and paying lip service to the idea that they're trying really hard to find him, or just ignore his present condition. After a few issues of the former, the series by now seems to have settled comfortably into the latter.

All of which is a long-winded way of saying that the idea of Lando going back to Cloud City is a fine one, with the dangling plot thread of the city's fate an obvious thing for this series' to follow up on, but it's predicated on the audience just accepting that Lando is, as presented, more concerned with checking in on his former business interests than he is in rescuing his old friend from the clutches of a vile gangster (who was put in those clutches, in part, by Lando himself). Which, ultimately, is understandable, because the series needs to keep telling stories that don't involve Han and the search for him in some capacity, and, to its credit, this is a largely entertaining start to a story that takes full advantage of an opportunity left by Empire.

But it's nevertheless hard to read this and not think, "gee, maybe Lando should be using this time trying to rescue Han instead...".

Next Issue
Looks like Lando is falling to his death.