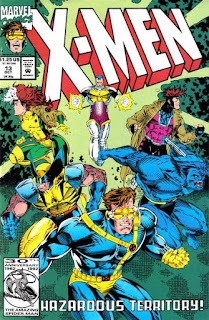 In a Nutshell
The X-Men rescue Xavier from Hazard.

Plot
The X-Men infiltrate Almagordo, discovering the secret basement level where Hazard is holding Professor X. Meanwhile, Cannonball contacts the X-Men, but only Jubilee is home to take his call, while Rusty & Skids deliver a scroll to Stryfe which bears an image of Apocalypse. Back at Almagordo, the X-Men battle Hazard, a fight which ends when Cyclops blasts Hazard's gauntlets, triggering a release of his power that destroys most of the facility and leaves Hazard drained. Wolverine tries to question him about what he hoped to find at Almagordo, but Xavier insists there was nothing there, that any answers to be found aren't where Xavier's father died, but perhaps they can be found where he lived.

Firsts and Other Notables
Hazard is defeated this issue, and though he's left alive, he won't appear again until an issue of X-Men Legacy, at which point he'll be killed off.

This issue devotes a couple of pages to "X-Cutioner's Song" (and the Cable limited series) setup, with Rusty & Skids retrieving a scroll for Stryfe with an image on it bearing a resemblance to Apocalypse. It's established here that Stryfe is acquiring artifacts related to Apocalypse (a plot thread the Cable series will pick up on), and also that Stryfe and Apocalypse have a history together (which will factor heavily into "X-Cutioner's Song", as well as future Apocalypse stories). 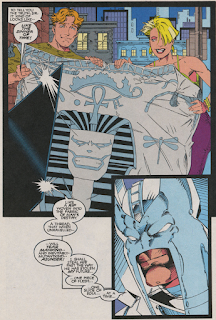 Further "X-Cutioner's Song" setup: Cannonball appears briefly, attempting to contact Xavier, or Storm, or Cyclops, but reaching only Jubilee, who ponders after he hangs up if she should have traced the call. 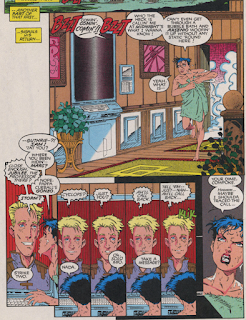 The end of the issue further teases a connection between Xavier's father and Wolverine's past, listing the names of Xavier, Marko and Ryking on a memo pertaining to the Shiva Scenario (the program sending the killer Shiva robots after members of the Weapon X project over in Wolverine), but nothing much ever comes of this tease. 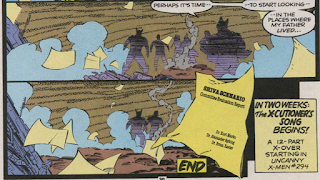 A Work in Progress
When the X-Men arrive to rescue Xavier, he says that he is psionically depleted, a convenient way to keep him from just ending the fight himself (but I appreciate Nicieza providing an explanation to that effect). 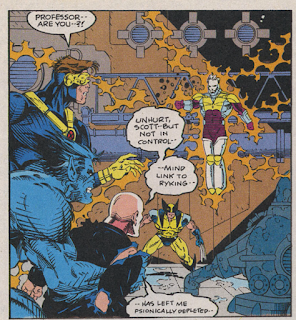 Beast snarkily asks why bother talking to Hazard when they can fight him, then later apologizes to Cyclops for bantering and promises to return his attention to the pointless fight. 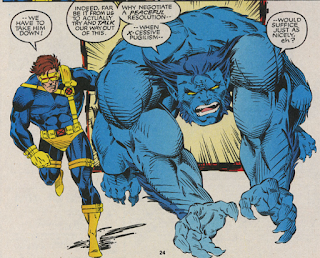 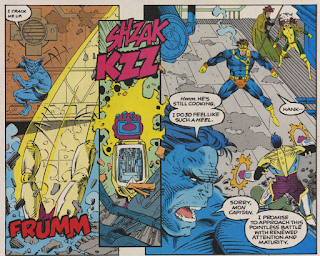 The Best There is at What He Does
Wolverine mentions to Rogue his recent struggles with his animal side, saying he wants to tear through things instead of think them through, and that after spending so much time fighting to control the beast inside hi, he's starting to wonder if the man is the lie, one of the few times the whole "Wolverine is becoming more animalistic" idea setup by Larry Hama in Wolverine #50 gets referenced outside of that series. 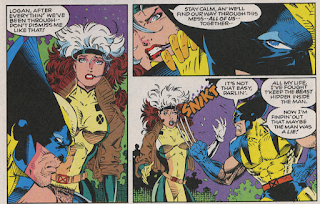 This scene also references Rogue & Wolverine's history together, something often overlooked despite the fact that they've been on the team together a long time (from roughly issue #171 to #247, and then the thirteen issues of this series).

It's in the Mail
A response to a letter in this issue mentions that the larger an object is, the longer it takes for Gambit to charge it (which is partially why he uses playing cards), which is, I believe, the first time that particular ratio is established.

Austin's Analysis
The ho-hum two-part Hazard story concludes ho-humly, with Xavier rescued, Hazard defeated and the mysteries about Xavier's father mostly hand-waved away and/or swept under the rug in the process. Art Thibert continues his Jim Lee impression, but is also sloppy in some of the storytelling (everything in this story takes place in a secret basement, but all the stairways leading to it are drawn going up; Wolverine & Rogue are captives of Hazard on one page, but free, without comment, on the next). Hazard's powers are vague, so he's more or less as much of a threat as he needs to be until the issue runs out of pages, and then Cyclops shoots his gauntlets and it's over. The one potentially interesting bit is some commentary from Beast, chiding the pointlessness of the fight, which is perhaps Nicieza taking some digs at the conventions of the genre (or could just be 'witty' banter from Beast). Nothing here is terribly bad; it's all just terribly average, which, along with being wedged between Jim Lee's run and "X-Cutioner's Song", is why this whole thing is ultimately so forgettable.