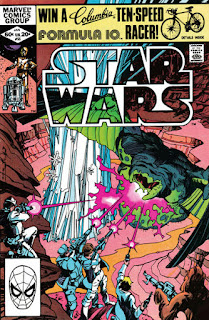 In a Nutshell
The Rebels befriend the Hoojibs and find a potential new base.

Plot
A group of Rebels, led by Leia & Chewbacca, scout the planet Arbra as a potential site for a new base. Meanwhile, Lando departs from the Rebel fleet to check in on Cloud City. On Arbra, the Rebels learn the small animal-like creatures native to the world are actually an intelligent species called Hoojibs, which communicate telepathically. Their leader, Plif, tells the Rebels how they've been chased from their home, a nearby cavern filled with crystals whose energy sustains them, by a creature called the Slivilith, which soon attacks the Rebels. Teaming up, the Hoojibs and the Rebels kill the Slivilith, and though the Hoojibs' cavern is an enticing prospect for a base, Leia refuses to take it from the Hoojibs. However, Plif suggests they share it, and offers to be their hosts indefinitely. Meanwhile, Lando arrives at Cloud City to find the place seemingly deserted, but is stalked by an unseen figure.

Firsts and Other Notables
This issue is the first appearance of the Hoojibs, a race of telepathic, bunny-like aliens native to the planet Arbra, as well as Plif, their nominal leader. The Hoojibs in general and Plif in particular will be a semi-regular presence in the series moving forward, and managed to live on in the old post-Marvel Expanded Universe thanks to mentions in various non-fiction sources through the years. 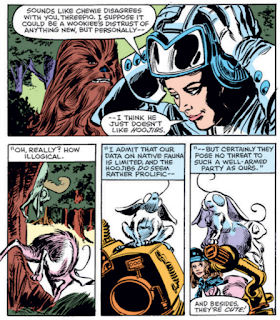 The planet Arbra, homeworld of the Hoojibs, is suggested as a possible site for the new permanent Rebel base, post-Hoth, this issue, with the Hoojibs extending an invitation to share it with the Alliance. Arbra will in fact serve as the next Rebel base, more or less for the rest of this series. 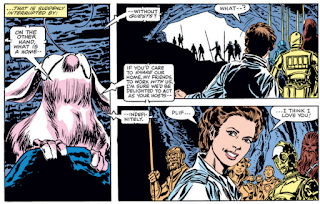 This issue was adapted for the book-and-record (and book-and-tape) Planet of the Hoojibs, which I had as a kid (I was big into the book-and-tape thing when I was little, and would listen to the tapes as I fell asleep). I remember some of the material being a little more intense than the usual book-and-tape fare, but loved having a Star Wars story to read along/listen to.

A Work in Progress
Lando departs this issue to check in on Cloud City, and finds it strangely deserted, in a setup for next issue. 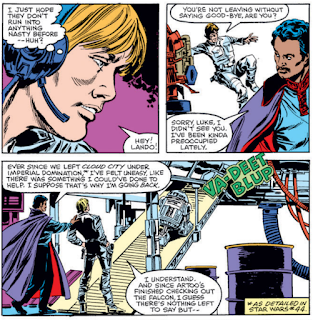 Um, Actually
Later sources will suggest that the Slivilith is a creation of the extra-galactic Yuuzhan Vong.

It's in the Mail
A letter in this issue criticizes Leia's romance with Prince Denid in issue #49 for all the obvious reasons. The response tries to play it off as their romance being ambiguous and not necessarily more than friendship.

Austin's Analysis
This is a great example of a well-crafted done-in-one issue created as part of an ongoing series. It's tells a self-contained narrative, with the Rebels meeting the Hoojibs and helping them reclaim their home all within the pages of this one comic. Yet it also connects back to previous events in the series, acknowledging the needs of the Rebels to find a new base and some of the recent adventures of Luke & Leia, and lays the groundwork for future stories, with Arbra setup to serve as the location of that aforementioned base, while Lando departs to check in on Cloud City, a setup for the central story of the next issue. One could hand this issue to a first time reader and they wouldn't be lost, and would receive a complete story for their troubles, yet it doesn't completely abandon the ongoing narrative in doing so, acting still as the next chapter in an unfolding saga. That's a balance many standalone issues struggle to maintain, but this one does so with panache.