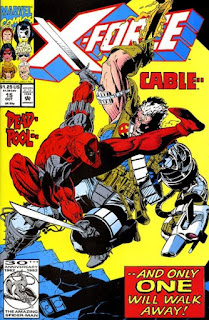 Plot
Crule attacks X-Force, determined to kill Cannonball, but Rictor blasts him off their ship, after which the team agrees to help Cannonball rescue Sunspot from Gideon. Meanwhile, at Tolliver's Sicilian home, Deadpool attacks Cable, but their fight frees the real Domino, who blasts Deadpool from behind with Cable's gun. The pair then run off to find Tolliver himself. As X-Force gets closer to Gideon's home, he contacts them, eliciting a promise from Cannonball to stay out of X-Ternal business in exchange for Sunspot's whereabouts. Later, X-Force arrives at Ophrah Industries and fights their way to a super-charged Sunspot. Hoping his blast field will protect him, Cannonball carries Sunspot into the air, where he releases a massive blast of energy. In Italy, Cable & Domino leap onto Tolliver's helicopter, but Cable convinces Domino to drop off before it reaches a height from which she won't be able to survive a fall, telling her to find X-Force. He then proceeds to destroy the chopper, seemingly killing Tolliver, before teleporting back to Graymalkin. Deadpool wakes up to find Vanessa, the fake Domino, missing, while on his space station, Cable declares its time for him to stop being the prey and start being the hunter. Later, X-Force arrives at Camp Verde, and welcomes their newest member, Sunspot, to the team.

Firsts and Other Notables
This issue marks the beginning of Greg Capullo's run as the series' artist, which will last until issue #27 (remarkably, without any fill-ins). He also gives the series a proper corner cover box for the first time.

Sunspot officially joins X-Force this issue, after the team rescues him from Gideon's scientists, thus restoring to the series all the surviving former New Mutants, save Wolfsbane, who worked with Cable before he created X-Force. 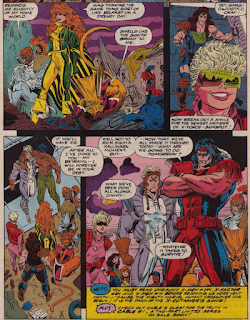 The group also arrives at Warpath's Camp Verde reservation, which will serve as their base of operations for the foreseeable future.

Tolliver is seemingly killed this issue by Cable (though he'll be back, and turn out to be Cable's son), putting an end to their rivalry for the time being. The contents of his will, believed to be a weapon of great power, will serve as the MacGuffin of the first Deadpool limited series. 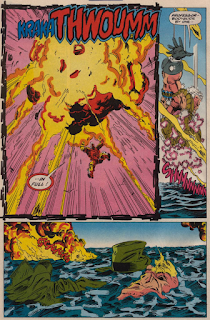 Forcing Domino to stay behind while he pursues Tolliver, Cable tells Domino to find X-Force (a group of people she's never heard of or met before, which the story acknowledges), which will be the focus of her actions for the next half dozen or so issues.

It's also noted that the Fake Domino (aka Deadpool's girlfriend Vanessa) survived; she too will factor into Domino's hunt for X-Force.

A Work in Progress
Crule makes a reference to cutting off Cannonball's "five branches"; possibly a suggestion of some kind of "five lives" principal for the X-Ternals, this never really goes anywhere (like most of the X-Ternals stuff). 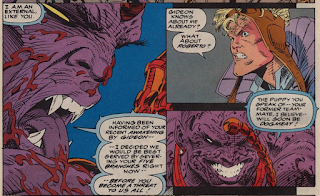 We've known about it for a few issues, but Cable finally learns that the Domino who helped him found X-Force was an imposter.

In exchange for being told the location where Sunspot is being held, Gideon extracts a promise from Cannonball to stay out of X-Ternal affairs. 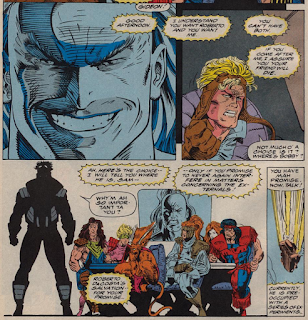 It's noted that Gideon's scientists have increased Roberto's solar energy storage capacity, something that presumably was done to put to rest the old "he's run out of energy/it's night" hangup that cropped up occasionally in old New Mutants stories (it will also lead to him manifesting his powers in different ways, beyond just super-strength). 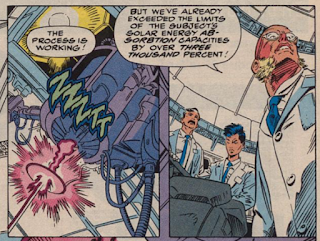 In Cannonball's absence, Siryn is shown to take charge. 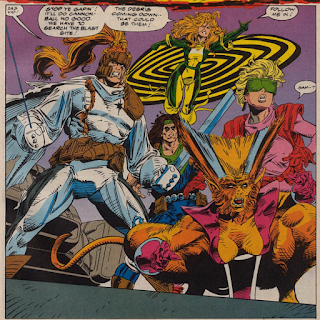 The damage done to Cable's face by Thornn is repaired this issue, after he returns to Graymalkin. 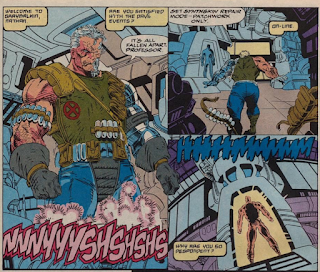 Austin's Analysis
Greg Capullo comes aboard as the series' new regular artist, just in time for "X-Cutioner's Song" (which, with its focus on Cable & Stryfe, really is an X-Force-led crossover), and for the first time in the series' short history, it has a competent artist who can draw more than one type of face, understands how to lay out a page to help tell the story, can use body language to inform character, etc. His work is still rough in places, but it'll get better, and this is without a doubt the best looking issue of the series yet.

Not to be outdone by his new collaborator, Nicieza continues his "untangle the series from Liefeld's dangling plots" mission while also setting up the looming crossover. Crule is, thankfully, dispatched relatively quickly, the Tolliver plot is mostly put to bed (when it rears up again, it'll be in other books) as Cable moves into position for his limited series, and by reuniting the team with Sunspot, Nicieza brings the book closer to the "graduate New Mutants" feel it always should have had, leaving only Feral & Shatterstar as the two members of the team without a connection to New Mutants specifically or the larger X-lore in general. I called last issue the series' best issue yet; this one bests that one in turn, which is the right direction for a series to be going. In the wake of the Image Exodus, both Uncanny & X-Men did their best to simply stay afloat in the absence of their chief creative contributors, whereas X-Force, detached from its creator by his own ambitions, is finally starting to find itself.

Next Issue
Tomorrow, the X-Patriots see the sights in X-Factor #83. Next week, X-Men #13 and Excalibur #55.
Newer Post Older Post Home
Posted by Austin Gorton at 12:00 PM