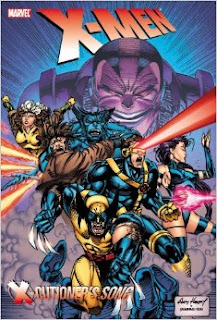 This spring, my wife and I are planning on moving, which this time around, also involves selling our current house. That means we're looking at a bunch of annoying moving-related work on both ends in the months ahead (much of it has already started). Combine that with the fact that, once we do move, my internet service will likely be spotty for a few days, and the need to rebuild my backlog of posts is apparent (also making that need apparent: the number of posts recently going live well past the noon timestamp I give them...). Writing three X-aminations a week (plus a weekly Force in Focus, plus stuff like this), the only conceivable way for me to build up any kind of backlog is to take a break, but since I'm reluctant to go too long without ANY X-aminations posts (I've got quite a streak going), I'm going to do something a little different: Retro X-aminations.

For five weeks starting at the end of January, I'm going to cut back to one post a week (on the original Wednesday release day), but instead of grinding the ongoing X-aminations to a crawl, I'm going to cover five stories I skipped the first time around, for whatever reason. Combine that with a solo post for the hilariously-90s "Capwolf" story on one end and a week covering only the Cable limited series and a strangely-bi-weekly issue of Excalibur at the other end, and I've got a solid seven weeks of light posting, during which I can once again write ahead and build up a backlog for the inevitable time shortages that will accompany the buying, selling, and moving into of a house (hopefully, this will also enable me to respond to comments more frequently, something I've been lax about of late but greatly miss).

If you're mad that regular coverage is getting delayed even further, well, you can partially blame Fnord over at SuperMegaMonkey, whose own periodic breaks from his project helped convince me that I could do something like this without fear of losing my entire audience. And if you're excited by the prospect of retro X-aminations and there's something you think I should have covered but didn't, let me know. I have a list created that extends beyond these five selections, but I'm sure there's other things I'm missing. I can't promise I'll cover everything (there are some good reasons I skipped some things), but I do plan to periodically revisit the idea of retro reviews in the future, either in bulk like this, or the occasional one-off when I need a light week.

So, with all that out of the way, here's a look at the next six months of X-aminations, as the X-books do their best to recover from the Image Exodus via "X-Cutioner's Song" (which also provides an opportunity to smoothly re-order which series are covered on which days of the week and in what order within a given month's releases), then begin the build-up to "Fatal Attractions" and their big 30th anniversary year, in which the already-large franchise will expand even more!