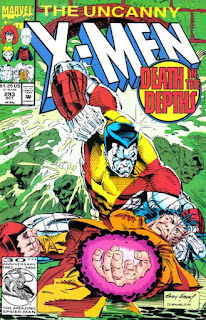 In a Nutshell
The death of Mikhail, Callisto and the Morlocks.

Plot
Storm, Bishop & Colossus follow the Morlocks deeper into the tunnels, and are shocked to find Mikhail waiting, who declares himself the Morlocks' new leader. Elsewhere, Jean attempts to find Archangel, while Callisto attacks Professor X. As Colossus tries reasoning with his brother, Mikhail uses his power to open the floodgates keeping the East River out of the tunnels. Elsewhere, Xavier manages to fend off Callisto, but then Mikhail teleports the pair to his side, telling the X-Men that he intends to put the Morlocks, and himself, out of their misery by killing them all, which he views as redemption for the lives he took in the Void. Meanwhile, Jean locates Archangel and tells him that contrary to what he believes, his wings don't have a consciousness of their own, and that he's in control of his own actions. With the water rising, the X-Men try to stop Mikhail, but he teleports them all out of the tunnel just before he, Callisto and the Morlocks die. Returning home, Storm mourns the loss of her plants, destroyed by Callisto, while a devastated Colossus calls his sister to cancel his trip home and the surprise he promised.

Firsts and Other Notables
This issue marks the second "death" of the Morlocks, following "Mutant Massacre", as Mikhail uses his power to open the floodgates and drown them all. Eventually, it will be revealed that he actually teleported them to an alternate dimension, from which some of them will return as the more violent Gene Nation, and later still, another group of generic mutants will set up shop in the tunnels so we can have a "classic" iteration of the Morlocks running around again. 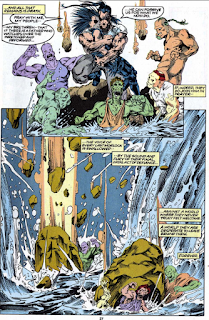 Both Mikhail and Callisto seemingly die with the Morlocks as well. The latter will return with Gene Nation and remain a semi-regular fixture thereafter, while the former will appear in the Storm limited series before making it back to Earth as part of the "The Twelve" crossover at decades' end.

Mikhail's death is the first of several tragic events that befall Colossus over the next year or so of issues, a subplot that culminates in his departure from the team for a good long while.

Jean tells Warren that he doesn't suffer from any kind of bloodlust, that his wings don't have a mind of their own, and he is solely responsible for his actions. This feels like it should be a big deal, and while it does more or less end the "angtsy Archangel" subplot that's been running in the series since the relaunch, it really isn't handled that way, and Archangel more or less just settles into the background of the narrative for awhile, without ever really grappling with the full implications of that. 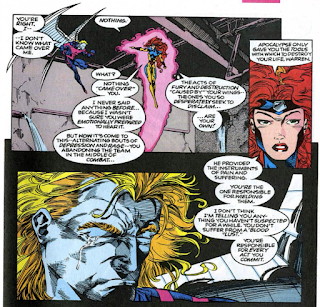 Creator Central
Andy Kubert provides the cover for this issue.

A Work in Progress
The Morlock child who drove the Morlocks into a frenzy (before Professor X stopped him) last issue is called Braincell here.

Xavier attempts to calm Callisto by comparing the loss of her physical beauty to his being recently re-crippled. 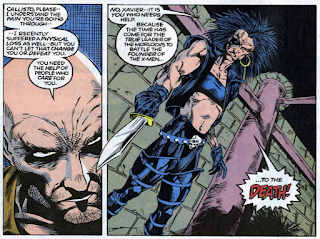 More incorrect details pertaining to Angel's maiming during "Mutant Massacre"; here he says it was the Reavers who attacked him, as opposed to the Marauders (the Marauders are, thankfully, depicted). 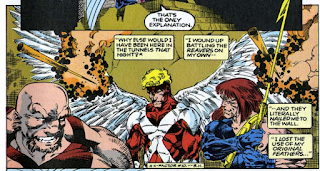 A legitimately funny bit from Iceman when he appears in the tunnels, and he responds to Mikahil's surprised "Nyet" with "Nyes!" 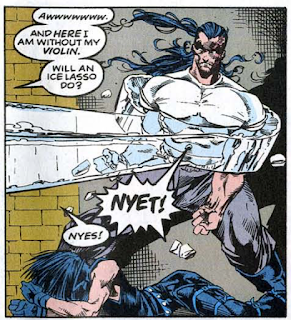 Austin's Analysis
The "Scott Lobdell Gets Rid of Mikhail Rasputin and Tries to Wipe Out the Morlocks, Again" story concludes, with Lobdell, well, getting rid of Mikhail and the Morlocks (and Callisto). They'll all be back, of course, in varying lengths of time (though, putting aside Gene Nation, a relatively long amount of time does pass before the classic status quo of "deformed mutants living in tunnels under Manhattan" is restored, certainly longer than after "Mutant Massacre", the first attempt to wipe them out), and because we don't really know any of these Morlocks, it's hard to care too much about their "deaths". Callisto, at least, has a history with the series (and some of the characters in this issue, chiefly Storm & Colossus), but she's been gone so long (and gone through so many changes), it's hard to get too worked up about her "death" either (plus, she'll be the first one to return).

If anything, the emotional heft of this story is carried by Colossus, and Mikhail's death marks the opening salvo in the "let's shit all over Colossus" subplot that culminates in him joining Magneto's Acolytes during "Fatal Attractions" and ultimately sidelines him from the X-Men proper for several years. We, of course, don't care any more about Mikhail than we do the generic Morlocks he wipes out, but we at least care about Colossus, and Lobdell generates some genuine emotion from the closing panels, in which a devastated Colossus speaks with Illyana, his planned surprise of Mikhail's survival now null and void (juxtaposing this scene with Storm crying over her plants, on the other hand...does the idea of Storm crying over her plants no favors).

It's hard to believe this is what Portacio (or Lee, or whomever) had in mind when they brought Mikhail back, but as a deck clearing exercise that wipes out one annoying character, one under-used character, and rejiggers a longstanding element of the narrative, it could be a lot worse. It's hard not to see the behind-the-scene machinations at work, but Lobdell manages to surround that with enough solid character moments, from Callisto's anger at losing her beauty to Bishop's ongoing development to an apparent end to Archangel's suffocating angst to Colossus' grief over the loss of his brother, that it's easy enough to look  past the somewhat mercenary plotting of the story.

Next Issue
Tomorrow, X-Force gets a new artist in X-Force #15. Friday, X-Factor takes the X-Patriots out on the town in X-Factor #83. Next week, the X-Men battle Hazard in X-Men #13.
Newer Post Older Post Home
Posted by Austin Gorton at 12:00 PM