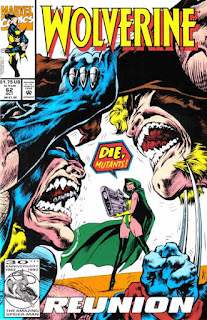 In a Nutshell
The Weapon X team tracks down Aldo Ferro.

Plot
Sabretooth frees himself from Wraith's restraints and attacks Wolverine, but their fight is interrupted by the arrival of Silver Fox, who says they will all need to work together to find out what's causing Mastodon's sudden aging, and if it will impact them. Silver Fox leads the group outside to her ship, where Hines is waiting. Just then, Mastodon dies, and the sight of it convinces Hines to help the group. With the help of Wraith's neighbor, they hack some Weapon X files, and discover the list of all the participants by code-name. Cross-indexing that list, they find another, listing "Ferro" along with project architects Hines, Cornelius & the Professor. Hines agrees to take them to Ferro's castle on a private island. The group infiltrates the castle and finds a young, muscular man waiting for them. Assuming he's Ferro's bodyguard, Sabretooth asks where Ferro is, and he replies that he *is* Ferro. Just then, Maverick emerges, saying he is the bodyguard.

Firsts and Other Notables
Wolverine comes face-to-face with the very-much alive Silver Fox for the first time this issue. 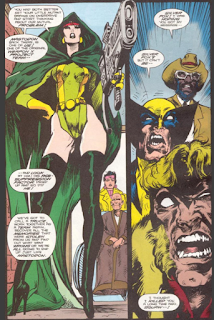 Hines, the last living member of the Professor/Dr. Cornelius/Hines trifecta from "Weapon X" turns up this issue, having been found by Silver Fox in Minneapolis (and, speaking as someone who lives in suburban Minneapolis, I'm not sure why finding here in that city is so notable...). 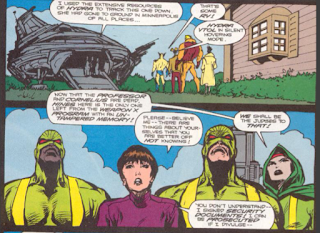 Jubilee, somewhat randomly, discovers she's discalculic (ie like dyslexia, but with numbers), but I don't think this ever gets brought up again (this is certainly the first time I've heard mention of it). 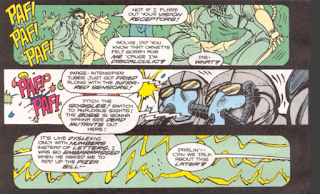 This is the first appearance of Aldo Ferro, who is listed alongside the other Weapon X project architects and is said to have been a major crime boss back in the 50s and 60s. Like the rest of the Weapon X participants, he remains young and vital.

Maverick pops up at the very end of the issue, his first present-day appearance in the series, as Ferro's bodyguard. 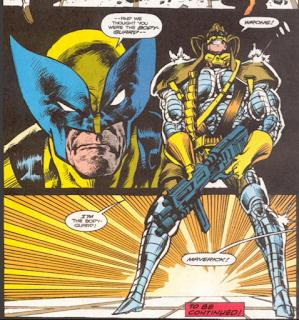 A Work in Progress
Mastodon dies this issue, reduced to a puddle of goo due to the failure of the Weapon X age-retardant. 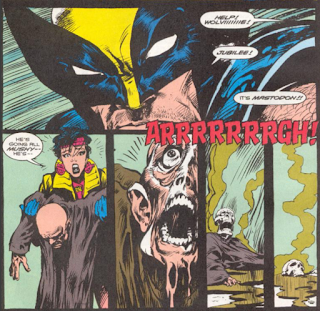 Two more Weapon X members, code-named Wildcat and Vole, are referenced, but nobody knows who they are.

The Reference Section
Wolverine says they should wall up Sabretooth with a cask of Amontillado, a surprisingly-literary reference to the Edgar Allan Poe story of the same name.

Pun with Peter Wolverine!
When Sabretooth asks "who brought the cake?" Wolverine responds with "I did, it's a pound cake!" before punching him. 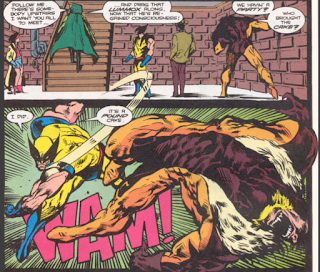 Austin's Analysis
Mark Texeira's art helps keep things energetic, but otherwise, this is kind of a mess. It's very repetitive, with lots of characters standing around talking before Wolverine & Sabretooth lose control and fight each other, then more talking, before their next outburst of fighting, over and over. Silver Fox even makes a point of saying they all need to put aside their differences and work together...just before blasting Sabretooth herself out of spite. Technically, the plot moves forward: more Weapon X members get recruited into Wraith's quest, and the team tracks down Ferro and, in the process, bumps into Maverick. But it's a rather boring and noisy journey along the way.