Plot
Angel is flying over a Stark facility just as it triggers an atomic explosion as part of a munitions test. The ensuing radiation brings out Angel's dark side, and when he returns to the X-Mansion, he easily bests his teammates before declaring his intent to join the evil mutants and flies off. Hoping to draw their attention, he goes on a rampage, and Professor X reaches out to the Avengers for help. Iron Man is the only one to respond, and he attempts to capture Angel. But Angel manages to evade and outfly Iron Man, so Iron Man resorts to a desperate gamble: depleting his power, sending him plummeting to the ground, in the hope that Angel's better nature will come to the surface. It does, and Angel rescues Iron Man, after which Iron Man meets the X-Men, and Professor Xavier promises to repay Iron Man for his help.

Firsts and Other Notables
On sale in the month between X-Men #2 and #3 (X-Men was bi-monthly at the time), this issue represents the X-Men's first appearance outside their own title.

The X-Men meet Iron Man for the first time at the end of this issue.

This issue ends with Professor X telling Iron Man he owes him a favor; Iron Man tries to collect in Avengers #3, contacting Professor X for help locating the Hulk, but receives a rather curt response (Xavier basically says they'll keep an eye out and holler if they see Hulk, like, thanks no thanks). 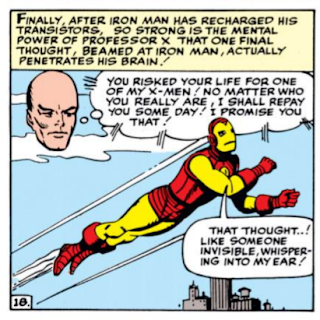 Occurring relatively early in the Marvel Universe, this is the tenth issue of Tales of Suspense to feature Iron Man (he first appeared in #39), and is the second issue to feature his upgraded, less bulky armor (hence the reference to the new Iron Man in the story's title).

This also takes place in the narrow window that Hulk is a member of the Avengers (before issue #3 of their series, which launched the same month as X-Men), as he is depicted as being a member.

Steve Ditko, co-creator of Spider-Man and Doctor Strange, draws this issue. It is a rare (perhaps the only) chance to see him drawing the X-Men, as well as the original X-Men.

A Work in Progress
Beast calls Angel one of the first X-Men, saying they joined together; Angel was actually the third person to join the team, and was a member before Beast.

Professor X is worried that with his X-Men training, Angel would prove a tremendous threat as one of the evil mutants, because if there's anything that's going to prove too difficult to stop, it's apparently Angel's ability to fly through hoops on command. 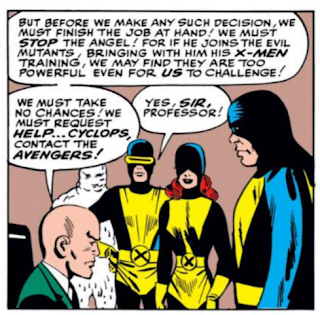 Of course, once Iron Man snaps Angel out of it, Professor X credits his training. 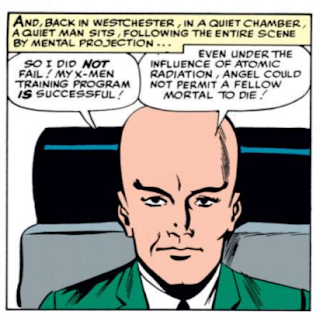 The evil mutants Angel wants to join are never named (and this story predates the introduction of the Brotherhood of Evil Mutants, so at this point we're dealing with, essentially, Magneto & Vanisher as the only previously-established evil mutants).

Ah, the Silver Age
The premise of this issue is so delightfully Silver Aged, with Angel being caught in an atomic blast (set off my Tony Stark as part of a test, because sure, why not sent off nuclear weapons in the city?) and the ensuing radiation turning him temporarily evil (as opposed to, say, killing him immediately or slowly via cancer). 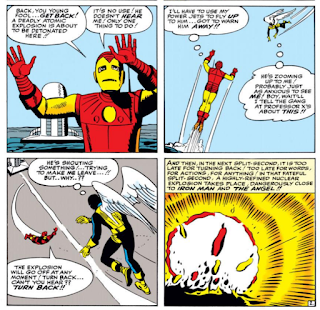 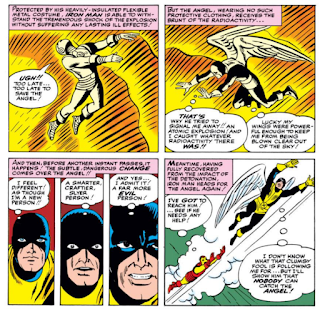 Angel is able to flap his wings...fast enough to...melt ice? 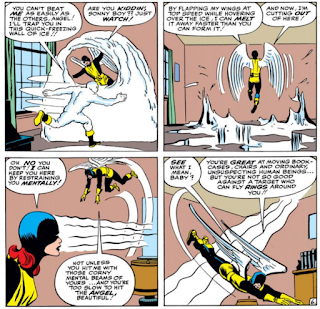 Also, Marvel Girl's telekinesis is depicted as being a visible force which can be dodged.

Iron Man attempts to stop Angel from flying through a door by sealing with some hand-flung magnets, prompting Angel to...simply go out a different door nearby. 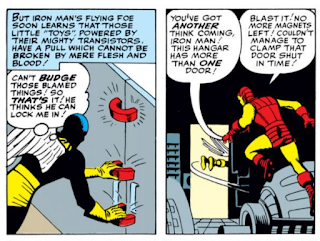 Thankfully, it's noted that Angel's radiation-fueled rampage didn't cause any damage.

We also get one of those nifty Silver Age cutaways to show how something (sort of) works. 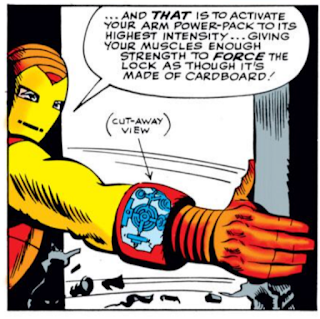 Another patented Professor Xavier invention, the viewscope. enables the X-Men to watch the Angel/Iron Man fight. 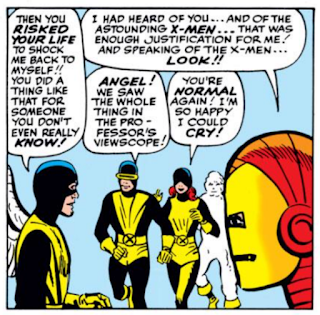 Human/Mutant Relations
The X-Men are said to be a licensed organization, with a direct line to the Avengers. 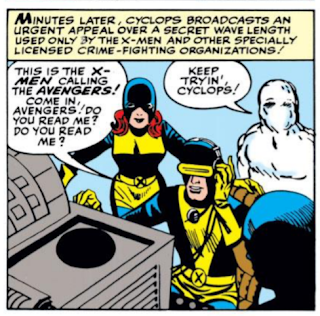 Austin's Analysis
Of all the original X-Men, Angel is the one Stan Lee decided to single out as the chief antagonist of Iron Man (and feature on the cover) in this issue, which is an interesting decision - mainly because Angel has always seemed like the weakest of the original X-Men (aside from Marvel Girl, but that's more down to the writing; on paper, telekinesis > giant bird wings), but also because, while Iron Man is capable of flight, it's not really his chief feature (especially at this point in his history), making Angel an odd antagonist for him (to Lee's credit, Angel does outfly Iron Man, thus honoring the unwritten maxim that characters who can only do one thing really well should always beat characters who can do that thing along with other things aka "Why Flash is Faster Than Superman"). It seems like Iceman or Cyclops might have made for a more thematic match but, given the times, Angel probably just popped better on the cover.

Also interesting in this issue is the X-Men's attempted communication with the Avengers, and the note that they're using a frequency shared by duly-authorized crime fighters, which, given the X-Men's later history and relationship with the authorities, seems like an odd scenario. It is, of course, just another example of Lee tossing something out there to satisfy the needs of the script right in front of him at the moment, but it also underlines how the innovation of the X-Men being mutants was originally less about what that meant in terms of their relationship to "regular" humans, and more about making it so Lee didn't have to come up with a specific origin for every super-powered hero going forward, with all the "feared and hated" stuff that would come to define them and set them apart from other teams coming later.