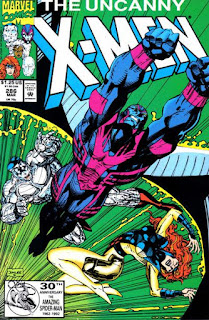 In a Nutshell
The X-Men return to Earth with Mikhail in tow.

Plot
Colossus is stunned to be reunited with his brother Mikhail, who explains that his death was staged before the Russian government sent him to this world, and how he ended up sealing the portal at the cost of the lives of people he had come to care about. On Earth, Xavier & Forge confer with some of the world's top minds trying to close the portal, to no avail. Inside the void, Mikhail refuses to use his energy manipulation power to shutdown the portal a second time, which an enraged Colossus views as an act of cowardice. Meanwhile, an enthralled Archangel leads the Posse Comitatus against the rebels, including Mikhail and the X-Men, now joined by Iceman and Sunfire. When Colossus is threatened, Mikhail is driven to action. Realizing the growing portal threatens his brother as well as everyone else, he works in concert with Sunfire, Iceman and Jean to use his power to both close the portal and send the X-Men home, while keeping everyone else alive on the other side. The act nearly kills him, however, but Colossus revives his brother, who is stunned to learn they have a sister while wondering if Colossus and his friends do this sort of thing every day.

Firsts and Other Notables
John Byrne is out, Scott Lobdell is in as the new scripter (though Byrne will get co-scripter credit on issue #288), with Byrne leaving due to similar shenanigans as drove Claremont off the book - late pages, last minute rewrites, etc.  Lobdell will stick around, scripting over Lee and/or Portacio's plots, under the pair leave and he's given full control of the series with issue #291, after which he'll stick around, occasionally writing both this book and X-Men, until issue #350. Even moreso than the Image guys who relaunched the franchise in 1991, Lobdell is arguably, for good and bad, the defining voice of the X-Men in the 90s.

Mr. Fantastic, Hank Pym and Nick Fury all appear briefly in this issue, as experts contacted by Professor X regarding the growing threat of the portal on Earth. 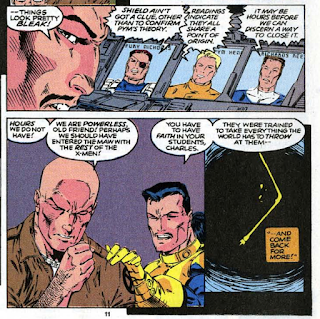 Jim Lee provides the cover for this issue.

Sales continue to rise, as the Statement of Ownership printed in this issue lists the average number of copies sold during the preceding twelve months as 460,875, up from 415,961 in the previous statement, with the actual number sold of the issue nearest to the filing date as 599,550, up from 404,300.

A Work in Progress
This issue presents us with an origin of sorts for Mikhail, explaining that his death (as referenced in X-Men #99) was faked, and that he was then sent to explore the portal that later sucked in the X-Men and Sunfire. There, he ended up marrying the daughter of the Worldly Avatar, until he realized that the Avatar's forces had slain his crew members before he awoke, at which point he rebels and tries to destroy the portal, which ends with most of his rebel followers dead. 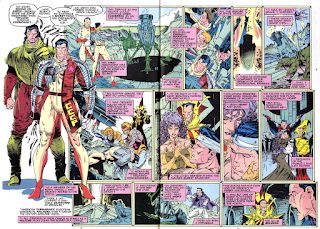 Iceman is apparently a Mets fan. 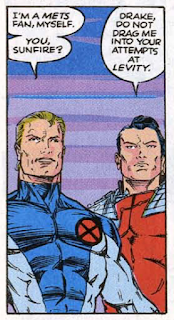 Archangel's wings once again act of their own accord. 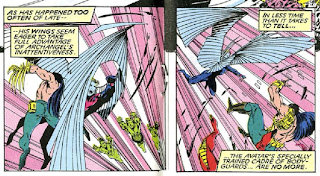 The forces Archangel is leading against the rebels are called the Posses Comitatus. Not that any of this will ever be referenced again.

Mikhail, who disappeared before she was born, learns of Illyana this issue, and Colossus makes a joke about her age. 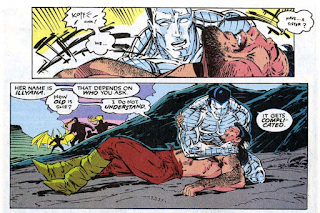 An ad for one of those comics wholesalers in this issue is running a hologram special, and features the cover image of the Hulk wielding two big guns from Incredible Hulk #390. 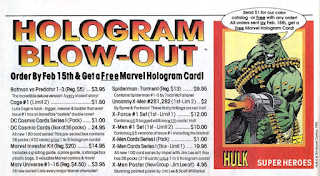 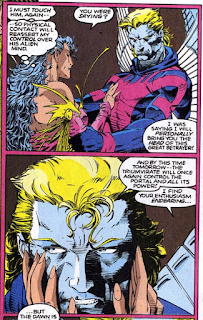 Colossus mentions that his country is crumbling around him, a reference to then-contemporaneous fall of the Soviet Union, a comment that is probably problematic in the sliding timeline. 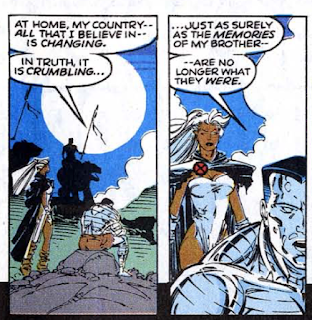 Claremontisms
Anyone who thinks Claremont was bad when it came to having characters refer to other characters by nicknames needs to read this issue, as Colossus and Mikhail call each other about a half dozen different names across two languages throughout it ("Misha", "Kavon", etc.). Lobdell will quickly display a tendency to ape (and exaggerate) this particular Claremontism.

Artistic Achievements
Early in the issue, Mikhail says there will be time for explanations about what happened to him later, then proceeds to offer up that explanation...on the next page.

Bullpen Bulletins
This month's Cool-o-Meter doesn't like pregnant women on magazine covers or Scarlett. It also has Rintrah in entirely the wrong place (he belongs closer to the top).

It's in the Mail
Letters in this issue mostly all rave about Bishop and call for him to join the team, something the responses pretty much confirm. There's also a lot of talk (across a couple different letters) about how the introduction of Bishop will affect Storm's relationship with Forge. Given that Bishop and Storm have interacted directly exactly once thus far, and there was zero hint of any romance between them, the assumption seems to be that just because Bishop is black, he will of course end up dating the black woman on the team, even though she's technically romantically linked to another member of the team, which is...disconcerting.

Austin's Analysis
The ending to this little extradimensional jaunt. It helps, of course, that it is ending, and puts to rest the whole slapped together and vaguely-defined alien culture, but it's also helped by the relationship between Mikhail and Colossus. Mikhail will ultimately turn out to be a dud of a character, but he works here (arguably better than any other time, ever) because of the impact he has on Colossus, a character we do actually care about. Contrasting Mikhail both with the idealized image Colossus has of him as well as Colossus himself when he first joined the X-Men helps ground everything else swirling around in the characters and the history of the series.

The rest of the issue is pretty much nonsense, with little sense of where the characters are in relation to each other and the stuff happening around them, with events just happening because the story needs it to happen, while the art, which in previous chapters was at least consistent, is a mess (I'd have guessed this had multiple inkers, since some of the pages are vastly different from others; apparently, Portacio was just rushed). But at least in the Colossus/Mikhail material there's something of substance, allowing this otherwise forgettable and mostly pointless story to go out on a relative strong note.

Next Issue
Tomorrow, Cable gets a flashback in X-Force #8. Friday, the "War and Peace" crossover continues in X-Factor #76. Next week, Sabretooth joins the fray in X-Men #6.