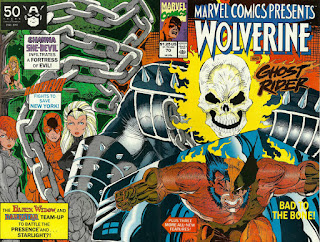 Plot
Issue #64: In Madripoor and Brooklyn, respectively, Wolverine and Ghost Rider are both attacked by ninjas sent by Deathwatch. Issue #65: Wolverine and Ghost Rider track the ninjas to a cemetery in Brooklyn, where they've taken a captive woman. Each believing the other to be working for Deathwatch, the two heroes fight, knocking each other out. Just then, the captive woman and a mysterious stranger kill the ninjas, then decide to take the unconscious heroes to their father. Issue #66: Their father arrives and dispatches his son, saying he and Brigite can tend to the fallen heroes. Just then, Ghost Rider wakes up and races off. Later, Ghost Rider is once again attacked by Deathwatch ninjas, while a recovered Wolverine is attacked by a shadowy figure before being approached by Brigitte at the same time Ghost Rider meets her father.

Issue #67: Brigitte tells Wolverine she's there to help him, and when Ghost Rider attacks him, Yuji Watanabe, Brigitte's father, intervenes, telling them he knows Wolverine and needs their help. However, Brigitte is soon kidnapped by Deathwatch, along with Ghost Rider's friend Jack, and the three men are joined by Yuji's son Sean, who goes by the name Brass, to help retrieve them. Issue #68: Splitting up, Wolverine and Brass manage to track down where Brigitte and Jack are being held, but when they arrive, they find Yuji waiting, saying that Ghost Rider, eager for vengeance, is already inside. Issue #69: Infiltrating Deathwatch's building, Wolverine & Ghost Rider learn that Brass has been waging a war on the Prime Movers, as their recent actions led to the death of his girlfriend, and that Brigitte and Jack, a student of Yuji's, have been kidnapped in retribution. Suddenly, the heroes are attacked by more of Deathwatch's goons.

Issue #70: The four heroes fight their way through the building, reaching Brigitte and Jack just as Deathwatch himself arrives on the scene. Issue #71: Ghost Rider feigns joining Deathwatch in order to spare innocent lives, attacking Wolverine and Brass as cover to enable them to find and free Brigitte and Jack. Together, everyone escapes. As the Watanabes leave to get medical attention for Jack and Brigitte, Ghost Rider departs, declaring that Deathwatch will stay pay for the innocent lives he has taken.

Firsts and Other Notables
This marks one of the first encounters between Wolverine and Ghost Rider, two character who, thanks to their shared popularity and anti-hero status, will cross paths rather frequently throughout the early 90s. This Ghost Rider, Dan Ketch, is actually the second character to use that name, picking up the mantle from Johnny Blaze, the original 70s-era Ghost Rider (who ends up playing a role in the new Ghost Rider's series as well). 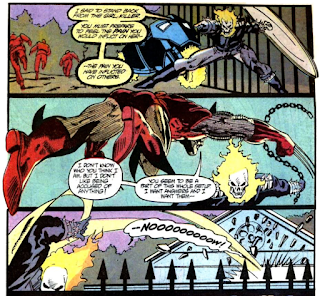 The villain of this story is Deathwatch, one of the Dan Ketch Ghost Rider's more prominent recurring antagonists (I first encountered him via the Marvel Universe Series II trading cards). I actually know very little about Deathwatch's deal, his powers or motivations or anything like that, but he's got a pretty cool look about him.

Internal continuity within this story is kind of a mess; Brigitte is referred to as "Emmaline" by the summary text on the inside cover (and at least once in-story), issues begin in different places then the previous one ended, and it's not always clear where exactly the characters are at given times.

Creator Central
This story is written by Howard Mackie, who was the writer of Ghost Rider's series at the time and will rise to some level of infamy as a Spider-Man writer later in the 90s. We'll also see him pop up again in the X-Universe as well.

Art comes from Mark Texeira, who was the regular inker on Ghost Rider's book at the time, and will become the regular Wolverine penciler after Marc Silvestri leaves (and eventually draw the first Sabretooth miniseries as well).

Issue #70 features a cover by Rob Liefeld, while issue #71's cover is drawn by John Byrne.

A Work in Progress
Wolverine's adventure with Havok in "Pharaoah's Legacy" is mentioned, a rare bit of self-referential continuity for this series. 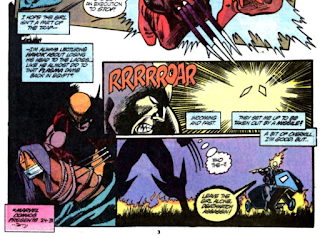 In another rare bit of continuity, the events of "Acts of Vengeance" are referenced in this story, with Wolverine citing his battle with the Mandarin in X-Men #256-258 as motivation for being targeted in this story. 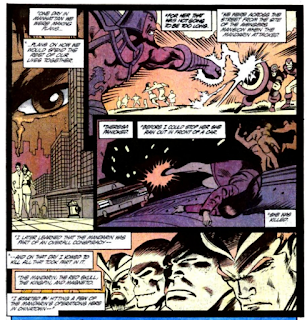 Not sure if this is common knowledge amongst Ghost Rider fans, but issue #65 shows that Ghost Rider's entire body is skeletal (I'd always assumed it was just his head). 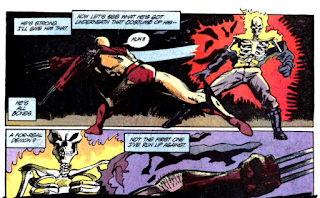 The Best There is at What He Does
Interrogating a ninja, Wolverine performs a variation on the "one claw on each side of the head" routine.

Watanabe, who knows Wolverine, mentions that have some shared acquaintances, a different take on the usual "never seen before old friend" routine. 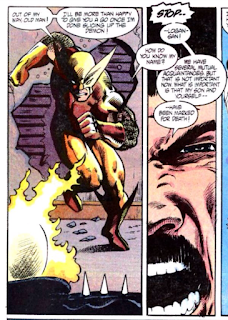 Teebore's Take
There were two reasons I was interested in examining this story (which, like most of the MCP stories, I'd never previously read). For one, it marks an early encounter between Wolverine and Ghost Rider, a character who, in this iteration, would burn (pun intended) extremely brightly in terms of his popularity in the early 90s before largely fading into the background of the Marvel Universe once again, which means this won't be the last time we see the two extremely popular anti-heroes paired together. For another, this story is drawn by Mark Texeira, who will eventually succeed Marc Silvestri as regular penciler on Wolverine.

Texeira's art, though not yet quite as stylized as his later work, is the clear highlight of this story, which otherwise falls into the usual traps of most Marvel Comics Presents stories (in addition to being a bit messier than most): the shorter chapters result in a pace which is both too fast and interminably long along while requiring a series of forced cliffhangers, the supporting characters are all one-note and mostly disposable, and the story ends up having little impact at all on the narrative of the main characters. But Texeira does liven things up a bit, playing with shadows and negative space (which is a hallmark of his style) as well as the page layouts (at one point, he depicts parallel narratives on the same page, with the top half belonging to one character and the bottom half the other) to create a moody atmosphere that's really better than the narrative deserves (though the art is also, at times, a culprit in the story's overall murkiness). The end result is a story that is more of the same, MCP-wise, but is at least fun to look at, featuring arguably, if not the best, at least the most distinctive art since the early John Buscema-drawn issues.

Next Issue
Tomorrow, Nightcrawler fights an island in Excalibur #31, while Wolverine fights some more Yakuza goons in Wolverine #33. Next week, "X-Tinction Agenda" returns in Uncanny X-Men #271.