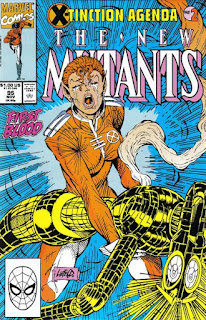 In a Nutshell
Warlock dies as Cameron Hodge returns.

Plot
Storm, Boom-Boom, Rictor, Wolfsbane & Warlock arrive in Genosha, and are confronted by the new Genoshan commander, Cameron Hodge, now just a severed head attached to monstrous robotic body. They attempt to fight back, but Hodge calls in Wipeout to remove their powers. Back at the X-Mansion, the remaining New Mutants and X-Men scout the site of the Genoshan attack, but are unable to identify the Genoshans from their discarded equipment. Back in Genosha, Storm and the New Mutants attempt to help Warlock, who lost much of his life-energy during Pipeline's transit. Just then Hodge enters their cell and takes away Warlock, declaring that he's going to appropriate Warlock's power so he can regain his normal form. Hodge proceeds to bring Warlock to the Genegineer, declaring he needs his help to absorb Warlock's power, but the Genegineer argues that Warlock should be used to the benefit of the state, like all mutants. 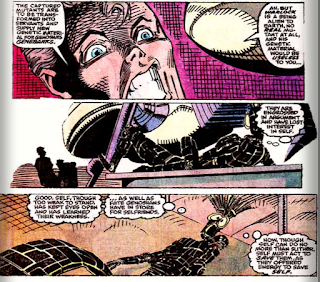 As the two argue, Warlock musters enough energy to sneak away, then throws himself into the force field of his friends' cell, freeing them but dangerously depleting his energy. He urges them to leave him behind so his sacrifice won't be in vain, and everyone scatters. But Rahne doubles back, refusing to lose Warlock like Doug was lost. However, when she finds him, Hodge has already begun absorbing Warlock's power. Rahne manages to interrupt the process, stopping Hodge, but not before Warlock fades away until all that remains of him is a pile of dust. At the X-Mansion, the remaining X-Men & New Mutants, joined by X-Factor, learn that the Genoshans have captured their teammates when the Genoshan president declares on TV that Warlock has died and the rest will be tried and executed. Just then, Val Cooper calls, saying the President wants to meet with the X-Men. But Forge wonders if its to offer them assistance, or stop them from acting.

Firsts and Other Notables
Warlock dies this issue, and his death marks the most significant casualty of "X-Tinction Agenda" (other characters come out of it changed, but Warlock is the only character to die in the course of the story), at a time when not every major crossover needed a big character death to make it seem important. He will, of course, return in the future, but his death actually sticks for awhile (well, technically, he returns in just a few years in the pages of Excalibur as Douglock, but that character's whole schtick is that it's a mystery whether he's a resurrected techno-organic Doug Ramsey or just a resurrected Warlock taking Doug's form; years after his debut, the latter is revealed to be true). 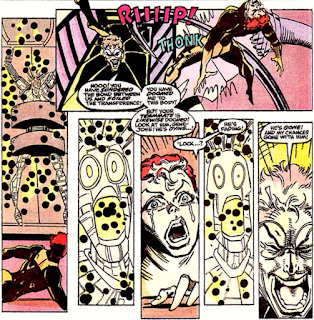 Warlock's death also marks the first departure of a core New Mutants character as the series continues its transformation into X-Force (Rusty & Skids are already gone, of course, though they were New Mutants for a far shorter time than Warlock, and most of their time they spent on their own, away from the rest of the team), and it is the first in a series of significant character exits in one form or another that will unfold over the remainder of the series' short life.

This issue reveals that Cameron Hodge, former leader of the Right last seen having his head chopped off by Archangel in X-Factor #34, survived Archangel's attack and is a leader of some sort (with the generic title of "Commander") in Genosha. He now possesses a massive robotic body (referred to here and throughout the story as being like a mechanical spider) with tentacles and the ability to phase through walls (later chapters of the story will reveal additional abilities as well), to which his head, the sole remaining part of his original body, is attached. I don't believe it's ever revealed how, specifically, he went from a rolling (but still living) head to having his head affixed to a giant robot spider body. 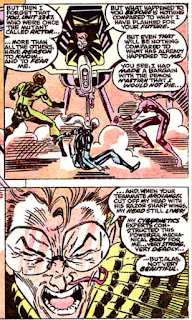 Hodge attributes his survival to his deal with N'astirh, who promised he would never die. I've always thought the fact that the agreement held even after his head was severed, leaving Hodge alive but just a head, was a rather elegant way to bring Hodge back, an ironic, "careful what you wish for"/"don't make deals with demons" kind of thing. N'astirh's deal will actually hold up moving forward, as Hodge becomes something of an evergreen villain, popping up in two later crossover stories following this one, despite continuing to seemingly die very apparent deaths each time.

Though not outright stated, the reveal of Hodge's survival confirms he was the mysterious person leading the Right in X-Factor #57 and watching Archangel from the shadows in X-Factor #59.

As much as this story is about the X-teams fighting Genosha, in general, the presence of Hodge, in addition to help further tie the storyline in to the X-book's history, also gives them a specific physical threat to overcome, something tangible they can fight, in addition to the more thematic battle against the deep-seated intolerance of Genosha.

Hodge's specific goal in this issue (aside from his more generic intent, revealed in later chapters, of using Genosha's beef with the X-Men to further his own anti-mutant agenda) is to absorb Warlock's shapeshifting ability so he can have some semblance of a normal body again. Rahne interrupts the process before that happens, though Hodge's goal here takes on some additional meaning after he pops up as a member of the techno-organic Phalanx (an offshoot of Warlock's species) shortly before the "Phalanx Covenant" crossover.

The art in this issue, credited to "Liefeld and Co.", is notably bad, even by Liefeldian standards, featuring everything from visual continuity errors (Rictor appears early in the issue with his quasi-mohawk hair, then later in the issue with the headband/mullet look he sported in X-Men #270) to mismatched thought/dialogue bubbles (twice Rictor and Storm's thoughts/words get wrongly attributed to the other), to conflicts between what the captions describe and what actually appears on the page (as Rahne is fighting Hodge, she mentions his tentacle turning into a hand; we cannot see this, as the tentacle/hand does not appear in any panels surrounding that dialogue), with the means of Warlock's death mostly unfolding via captions/dialogue, as the art simply shows an increasing pained/terrified Warlock while the words describe what's actually happening.

It's unclear how much of this is down to Liefeld and how much to the unnamed artists who clearly pitched in to help him finish the issue, but Liefeld is clearly struggling to meet deadlines at this point, and as a result, next issue will be the only chapter of "X-Tinction Agenda" he pencils in its entirety (in addition to the committee work in this issue, a fill-in artist handles issue #96).

Not that the best inker in the world could make much of this any better, but it's worth noting that Hilary Barta, who inked most of Liefeld's pencils during his stint on the book up to this point, has left the series; Liefeld will be inking himself moving forward, to the art's detriment.

Referencing his first appearance, when the Right tried to make Rictor destroy San Fransisco, a footnote incorrectly directs readers to X-Factor #16, not #17. 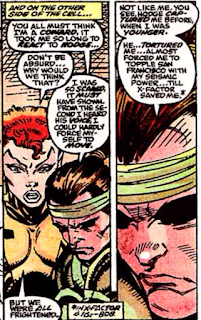 Like X-Men #270, this issue received a second printing, its cover featuring a brown background instead of a blue one.

A Work in Progress
Granted, he'd pretty much only made two significant appearances at this point in time, but Gambit's dialogue in this issue is hilariously off-model with what's to come. 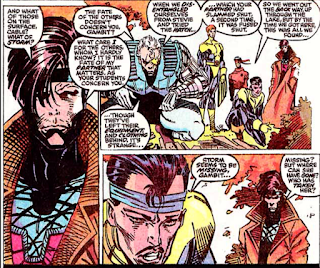 Young Love
Separating after escaping from their Genoshan cell, Rahne and Rictor kiss for the first time. 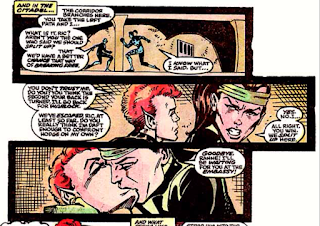 Teebore's Take
With the larger "X-Tinction Agenda" plotline still unfolding, this chapter, like the previous one, features a relatively narrow focus, zeroing in the captive Storm and New Mutants, with just a few pages dealing with the aftermath of the Genoshan attack back at the X-Mansion that serves to bring the rest of the characters into the story. And like the previous chapter, as much as this moves the "X-Tinction" plot forward (we're introduced to, essentially, the storyline's main villain in Hodge this issue), it's also steeped in nostalgia: both Rictor and Boom-Boom's pasts with Hodge are rightly referenced frequently, while Doug Ramsey is again name checked, officially giving Doug more play than he's had in years. Altogether, the callbacks in these two issues help make "X-Tinction Agenda", a storyline with a fairly specific focus directly connected  to really only one previous story of note, feel like a significant part of the overall X-narrative, at least in its early goings.

But the big notable thing in this issue is the death of Warlock. The modern trend of needing to punctuate every big crossover event with the death, however short-lived, of a notable character is an unfortunate one, but Warlock's death is less egregious than many of the modern ones. For one, it serves a different sort of purpose: instead of acting as an exclamation point at the end of the story to convince what readers just read was IMPORTANT, it's used instead, early in the story, to raise the stakes moving forward. This issue is all about making the captured mutants as vulnerable as possible: first they are laid bare before the Genoshans, denied even physical modesty, and drugged. Then they lose their powers, and are later threatened with the loss of their identities as well. Then, Warlock dies. Even though everyone but Rahne ultimately escapes, for the moment, in this issue, the end result is a sense that the Genoshans really mean business this time, and that Hodge specifically really makes their threat bigger than the usual fare, greater even than in the first Genoshan storyline, when Wolverine and Rogue were similarly broken down by their captors.

Secondly, Warlock is a character who was probably doomed the moment Bill Sienkiewicz left the series. Art Adams and Brett Blevins did some decent work capturing the manic energy of the character, but he was created by Sienkiewicz, and never looked better than when drawn by his creator. More significantly, Warlock, with his "selffriend" this and winking pop culture references, simply doesn't fit tonally with the direction Rob Liefeld was taking the series at this time. Whenever X-Force became a thing that was going to happen, it's clear that goofy shapeshifting alien Warlock was an ill-fit for the more EXTREME quasi-militarism Liefeld was bringing to the series, and wouldn't have survived the transition into that series regardless. Giving his then-inevitable exit meaning, not just as an exclamation point at the end of a story to make it seem like a BIG DEAL, but as a way to raise the stakes for the characters and the readers in the early goings of that story, to help sell the danger the rest of the characters are in, is probably the best exit the character could have hoped for.

Next Issue
Tomorrow, the plot widens as the rest of the X-teams react to the Genoshan assault in X-Factor #60. Next week, Wolverine teams up with Ghost Rider in Marvel Comics Presents #64-71.