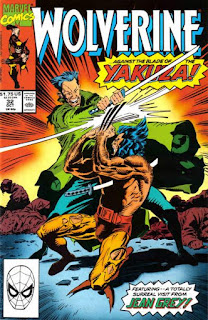 In a Nutshell
Wolverine struggles to heal himself as Dai-Kumo returns to Japan.

Plot
A badly injured Wolverine wakes from hallucination to find Tyger Tiger & Archie Corrigan tending to his wounds. Meanwhile, in the central highlands of Madripoor, General Coy's men harvest the spider monkeys needed by Dai-Kumo to create his Thunderbolt drug, much to the consternation of a native guide forced to help them. Just then Dai-Kumo receives a call from Goro, telling him Wolverine isn't dead after all. He insists that Goro finish the job, and bring him proof of Wolverine's death this time. Back at Tyger's penthouse, she leaves to try and track down Dai-Kumo while Archie goes to check on the Princess Bar, just as Goro arrives to kill Wolverine. He easily dispatches the guards left by Tyger, then manages to stab the still-recovering Wolverine in the heart, causing him to collapse. 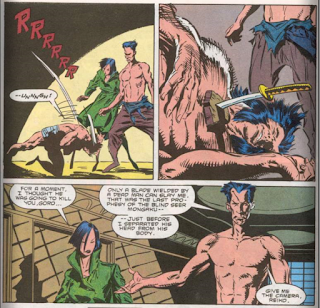 Hallucinating again, Wolverine sees an image of Jean Grey, who keeps him from slipping away into death and motivates him to remove the sword from his chest, after which he regains consciousness just as Tyger returns with Dai-Kumo's whereabouts. However, with the monkeys' harvested, Dai-Kumo is preparing to move his operation back to Japan. As he boards his plane, Goro arrives, presenting him with a photo of the collapsed Wolverine as proof of his death. Later, Wolverine and Tyger arrives at Dai-Kumo's warehouse, deserted except for the bodies of the monkeys and the horrified native. Wolverine tells Tyger to call Archie; they're going to Japan.

Firsts and Other Notables
The series returns to regular monthly shipping with this issue.

After being stabbed by Goro and left for dead, Wolverine sees a vision of Jean Grey, urging him back to life, an appearance that's touted on the cover. 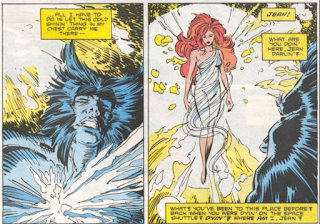 At the end of the issue, Goro shows Dai Kumo a picture of Wolverine with a sword in his chest as proof that he's dead, even though Wolverine should be invisible to electronic devices (like cameras) as a result of Roma's spell. 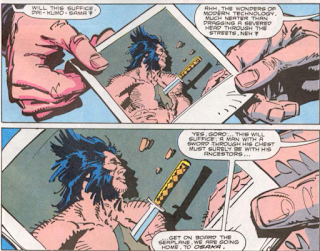 A Work in Progress
Wolverine insists that the half of the Princess Bar that is still standing following last issue is his half, while O'Donnel owns the damaged half. 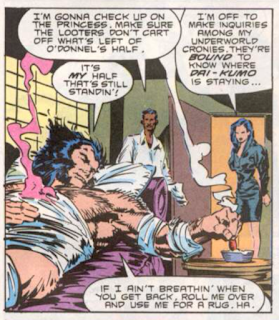 The Grim 'n' Gritty 90s
In one of his hallucinations, Wolverine is called "Ro-gan" by one of the Yakuza.

Wolverine blatantly smokes a cigar at one point (despite being so injured that the smoke is coming out his wounds).

The conversation between Dai Kumo and Dr. Malheur is filled with some pretty blatant exposition, more or less to the point of "as you know, I will now speak the information that you clearly already know, because I just declared that you know it". 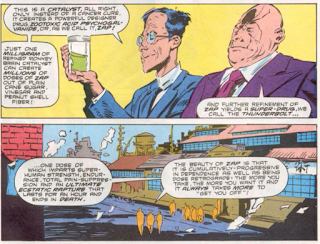 The issues ends with a pretty blatant PSA in the form of Dai-Kumo explaining to Dr. Malheur how despite his drug guaranteeing death to anyone who uses it, people will still use it, since plenty of people smoke and drink and eat saturated fats despite the health risks involved. I'm impressed they resisted the urge to put the words "the more you know" and a flying star behind him. 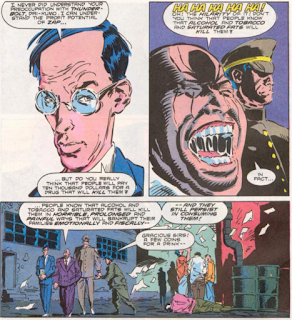 The Best There is at What He Does
Much of this issue hangs on the fact that Wolverine is heavily injured following the previous issue, with his body healing slower than usual, and as a result, a later sword through the chest nearly kills him. 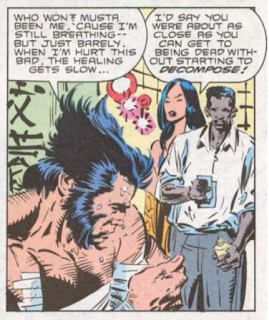 Teebore's Take
Once again, not a ton happens, plot-wise, in this issue; there's two separate hallucination scenes as Wolverine's body attempts to heal itself, and a bit of mustache-twirling from Dai-Kumo (along with a bit of development for Goro & Reiko). But once again, it's the tone of the story and the execution of the art that carry the day, as Hama continues to put Wolverine through the meat grinder physically on a level we've never really seen before in this series (almost on par with his condition in Uncanny X-Men #205 and #251), and Silvestri gets a chance to cut loose not only in the big hallucination scenes, but also in his depiction of a wounded, banged-up Wolverine. It's not the most original or fast-moving of stories, but the consistency of tone and level of artistic execution continue to be enough to carry the day.

Next Issue
Next week, "X-Tinction Agenda" begins with Uncanny X-Men #270.