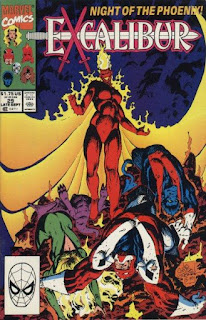 Plot
When Excalibur investigates a large alien ship that suddenly appears above their lighthouse, they discover it carries Alex Power of Power Pack. He explains that he and his family, as well as Franklin Richards, were taking their mother to a special psychic institute in London to help with her illness, when everyone was suddenly gassed and knocked out. Alex managed to escape, however, and came looking for the help of his old friends Nightcrawler & Shadowcat, whom he knew were now part of Excalibur. Together, Alex and Excalibur infiltrate the hospital, but end up gassed themselves, and carried through a portal by a group of demons. Individually, everyone experiences a different kind of nightmare, playing on their individual fears, the work of the villain Nightmare, who has enslaved Phoenix and is feeding on their psychic energy. However, Franklin Richards helps Phoenix break free of Nightmare's control by taking control of her via his dreamself, and she seemingly destroys Nightmare. The next morning Excalibur wakes up, having all experienced similar, shared dreams, while the Power family flies away from the psychic institute, the whole trip having been a waste of time.

Firsts and Other Notables
This issue is the second part of a crossover with Power Pack #60 (in which the Power family went to London seeking help for their mother). Michael Higgins was, at the time, the writer of Power Pack, and was in the midst of initiating a series of changes that would prove to be unpopular with fans of the series (such as Alex Power transforming into a horse-like alien Kymelia, as he appears in this issue). However, Power Pack #60, the ostensible first chapter of this story, wouldn't go on sale until the following month, and the series itself would be cancelled with issue #63. 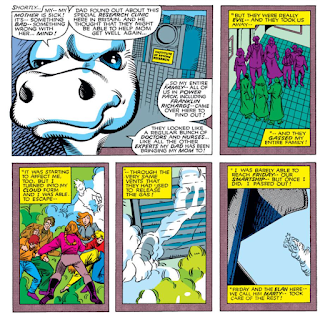 The villain of this story is long-time Dr. Strange foe Nightmare, who, as the name suggests, attacks people via their dreams. 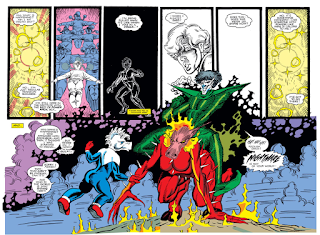 Most of the scenes set in Nightmare's dream world are rendered via horizontal two page spreads.

Creator Central
Michael Higgins and Chris Wozniak return to the series, and at this point I'd call them the book's new creative team if not for the fact that Claremont still hasn't entirely left the series.

Young Love
Meghan's nightmare involves her being rejected by both Captain Britain and Nightcrawler. 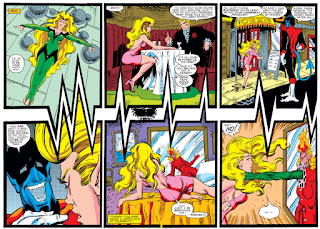 Similarly, Nightcraweler's nightmare finds him rejected by both Amanda Sefton (when was the last time this series mentioned Amanda?) and Meggan. 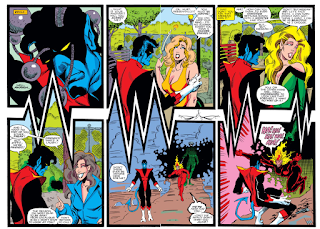 The Reference Section
Nightcrawler drinks from a Batman mug. 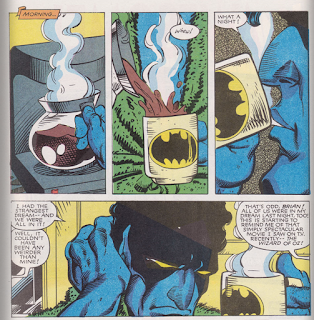 The Grim 'n' Gritty 90s
Both Rachel and Meggan walk around in some fairly skimpy pajamas, while Brian is hanging out apparently wearing nothing but a towel around his waist.

Teebore's Take
I'm not sure what led to Marvel's decision to double-ship Excalibur in the summer of 1990 (sales, obviously, but I don't know if this was a top-selling book they wanted to sell more copies of, or a fringe book they were hoping to boost via double-shipping), but as with Wolverine at this time, it's a shame the double-shipping comes at a time when the book is clearly in a transistion period, the added issues thus magnifying the fill-in nature and randomness of the title at this point in its existence. So after a straight fill-in last issue, we're back to another chapter in the Michael Higgins/Chris Wozniak sub-narrative of the series, one which essentially serves as the second part to a story begun in Power Pack, of all places.

A story which, to make this even more laughable, didn't even begin until a month after this issue was on sale - which means anyone who happened to be reading both books got the second part before the first. Add to that the fact that Higgins' Power Pack run was neither well-received at the time nor well-remembered today (the series would be cancelled just three issues after this little mini-crossover, and Louise Simonson would eventually write a one-shot that wipes away pretty much everything Higgins did with the characters), and it seems even more unfortunate that Excalibur, a series already struggling to establish a consistent identity and mired in a series of unrelated fill-ins of mostly sub-par quality, got sucked into the death throes of another series.