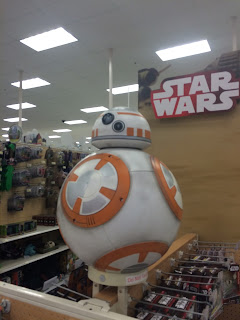 Yesterday was Force Friday, described by some as "Star Wars Christmas", the day in which an enormous wave of new and Force Awakens-centric Star Wars product was released, everything from new action figures and Lego sets to new Star Wars-branded clothes, books and games. Many stores were opening at midnight, with cosplayers present, creating something of a carnival atmosphere. In my younger days, I absolutely would have been one of those rushing the doors at midnight, even if, then as now, there wasn't a whole lot of product specifically I wanted or had to get right away.

As it is, the family and I did make it out to a couple stores on Force Friday, albeit later in the day, just to see what the setup was like, what kind of stuff was released, and to get a sense of the atmosphere surrounding the releases. Walking into my local Target, the first indication of Force Friday were the automatic doors: there was a First Order Stormtrooper on each door, with a sign inviting me to use the Force to open the doors (as if I don't already do that whenever going through automatic doors...). Inside,  I was immediately greeted by a large Chewbacca standee, urging me to take a selfie with him, and I appreciated the effort into establishing a Star Wars presence in the store from the outset. 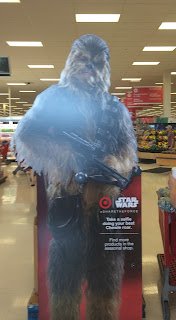 At Target, I was mostly just expecting to find the various departments well-stocked with new Star Wars stuff: new toys in the toy department, maybe an endcap of books and movies in the media area, etc. But a chunk of the seasonal section of the store (the spot for rotating features, where the back-to-school, Halloween, Christmas, etc. stuff moves in and out) was setup specifically for Force Friday. One side had new clothes and Halloween costumes, the other the new toys, books and assorted memorabilia (like Star Wars-themed mugs and portable power stations and phones cases and whatnot), with a "take your picture inside the cockpit of an X-Wing" and a pair of Star Wars-themed bikes in the middle. My favorite of the bunch was on the back side of the section: a display of all the Star Wars-branded food stuffs. Spaghetti-Os, anyone? 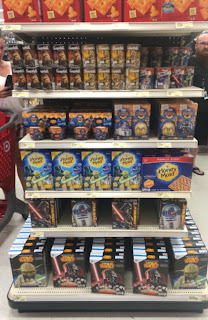 I still have a large collection of the 3.75" Star Wars action figures, a few from the original Kenner line from when I was a kid but most from the revitalized line that launched in 1995 and continues to this day, but for the most part, the only Star Wars figures I buy anymore are the newer six inch Black Series. Aimed at collectors, they are hugely poseable, on par with the Marvel Legends figures, and feature some pretty stunning likenesses and attention to detail in the sculpting. Unfortunately for me, all the Black figures were wiped out at Target by the time I got there (I'm sure I'll see them again at some point between now and the release of the movie, of course). In fact, even the new line of 3.75" figures were already picked over, with just a few remaining (from what I saw of those, they appeared geared more towards kids than collectors, not that there's anything wrong with that, with each figure featuring some of kind of snap on armor for added playability), though the few that remained enabled me to see the new packaging, in which Kylo Ren is clearly being positioned as the new Darth Vader (which isn't exactly shocking, of course). 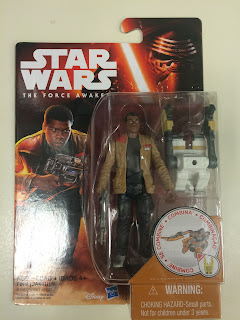 A large BB-8, already established as the representative character in Episode VII marketing, head up the Star Wars section of the toy department. In addition to the action figures, there's a ton of new toys, from build-your-own-lightsaber kits (which I absolutely would have eaten up as a kid, when I was already building my own sub-par lightsabers out of random stuff like Tinker Toys) to a Master Replicas version of Kylo Ren's lightsaber (the one with the now-infamous lightsaber crossguard). There's a plush talking Chewbacca, as well as an animatronic Yoda that teaches lightsaber combat, complete with in-store display showing how it works. 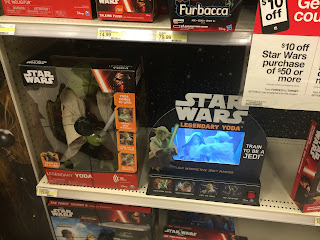 Reportedly, there's also some kind of remote controlled BB-8, but if Target had any, my store was sold out.

Though the Black series figures were sold out, I did get a nifty Star Wars sweatshirt for myself, and my wife got one as well, plus a couple of things for the kiddo, and my brother picked up one of the new Lego sets.

We then headed over to Toys R Us, which was, unfortunately, just as picked over, action figure-wise, as Target, though they too had some nice signage and displays throughout the store to help make what was, essentially, just a vigorous restocking of product feel like more of an event, and my eight-month-old son took a particular liking to a child-sized Chewbacca chair that gave me a bigger smiled than anything else that day.

All told, I thought both stores did an effective job of selling the idea of Force Friday, even while I freely admit that had I dove in more vigorously and hit up the places closer to midnight, it all would have felt like an even bigger deal, and that because there wasn't any particular item that I was desperate to get (the most enticing release of the day for me was Aftermath, the first book in the new canon to chronicle what happened to after Return of the Jedi, but I'd ordered that online months ago), the somewhat picked over stock wasn't terribly disappointing. Nonetheless, as an avowed Star Wars fan, it's great to see all this new product in stores, and to see the series, not just The Force Awakens but the whole saga, rising back up to a place of prominence in the pop culture zeitgeist.
Newer Post Older Post Home
Posted by Austin Gorton at 12:00 PM