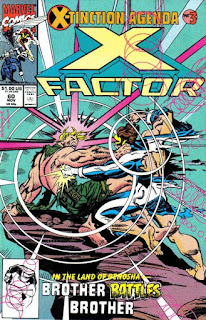 In a Nutshell
The combined X-Men, X-Factor and New Mutants arrive on Genosha but are ambushed by Magistrates led by Havok.

Plot
Hodge, the Genegineer and the Genoshan President meet to discuss the current situation, with the Genegineer outraged that the president is discussing policy with Hodge. But she insists that Genosha needs Hodge, even while Hodge is carrying out his own secret agenda. Meanwhile, X-Factor, the X-Men and Cable meet with Val Cooper in Washington and learn that while the government is pursuing a solution to the Genoshan crisis through back channels, they will also clandestinely support an effort to retrieve the kidnapped mutants. Returning to Ship with all the info the government has on Genosha, Cyclops bids goodbye to his son and Iceman to Opal before everyone departs for Genosha. Their approach is monitored by Hodge, who instructs the Genegineer to send the Press Gang and Magistrates, led by Havok, to stop them. 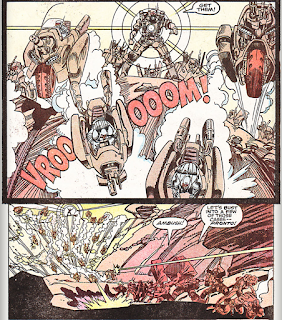 Landing in Genosha, the combined X-teams are quickly ambushed, and Cyclops is horrified to learn his brother is leading the attack. Their powers useless on one another, Cyclops tries to physically knock some sense into his brother, just like when they were kids. This rattles Havok's memory enough that he orders a retreat, and Pipeline teleports the Genoshans back to their citadel. Meanwhile, Rictor and Boom-Boom manage to escape the Citadel, determined to reach the American embassy, but Storm comes up short upon learning of Warlock's death, and decides to stay in the hopes of acquiring an ace in the hole. Back at the coast, Cyclops and Cable decide, that with any hope of a surprise attack blown and Havok's presence an indication of a personal bent to the Genoshan attack, that their best course of action is to move on the Citadel fast and ugly, much to the delight of a watching Hodge, who intends to first destroy his former friends, then use Genosha as his base to obliterate mutants from the world.

Firsts and Other Notables
Cyclops learns his brother is alive and the new Genoshan Chief Magistrate in this issue, as Hodge manuevers to put them in conflict with one another, his plan being that Havok being defeated by Cyclops will further motivate Havok to fight back against his own brother. 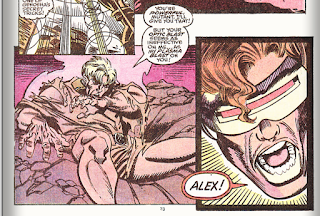 However, their encounter starts to trigger Havok's memory, and though he quickly pushes aside the possibility that Cyclops is his brother, this begins Havok's character arc for the story as he begins to discover his true identity. 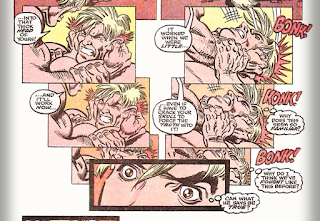 We meet the unnamed Genoshan President in this issue, who looks like a vaguely-female Ronald Reagan for whatever reason. 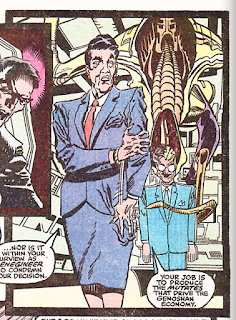 There's a neat moment at the end of the issue where Cable and Cyclops plan out their next move which gains a little something when you know the characters will later be revealed to be father and son.

Like the previous two chapters, this issue received a second print, denoted by the brown background color.

A Work in Progress
In a bit of dark humor, Hodge is seen with a cardboard cutout of a suit hanging around his neck, attempting (and failing) to look normal. 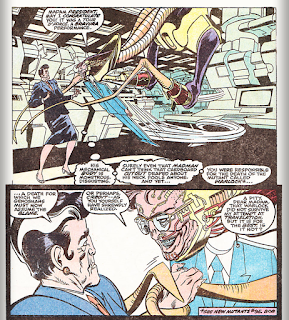 It's established this issue that Genosha has a parliament, and that they've voted in favor of trying and executing the captive X-Men and New Mutants. 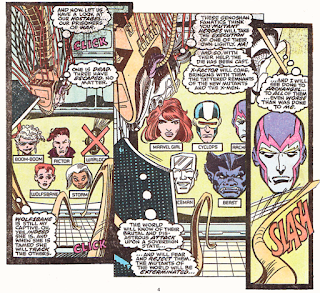 Trish's trip to India, mentioned last issue, is referenced, as her boss wishes she was in town to be covering the Genoshan story. 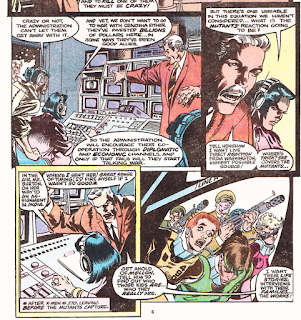 It's also established that the US has formally broken off diplomatic relations with Genosha following the Genoshan abduction of US citizens from US soil, though they are continuing to try and reach a solution through back channels.

The combined X-teams meet with Val Cooper at the government facility/Freedom Force base from which Cable escaped in New Mutants #88. 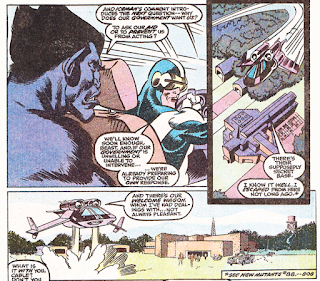 Underlining just how tough it must be to deal with death in a comic book, Sam and Roberto discuss the possibility that Warlock's death is a fakeout, since the X-Men were once considered dead but aren't, with Sam pointing out that hasn't stopped Doug from being dead (and thus making "X-Tinction Agenda" three-for-three in mentioning Doug Ramsey at least once in ever chapter; reading this now, I realize that, because I read this story long before I ever read an issue featuring a living Doug Ramsey, it's responsible for a lot of my interest in the character and belief in the significance of his death). 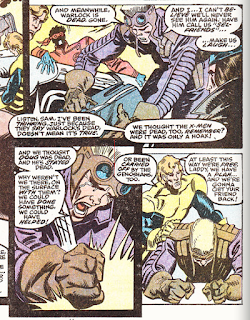 Their conversation also brings up an interesting point: at this point the New Mutants clearly have learned that the X-Men faked their deaths during "Fall of the Mutants", a likely bit of info for them to have acquired given that they've been living with Kid Storm for at least a little while at this point. Yet given how significantly the death of the X-Men affected the New Mutants, it's a shame we're never given an opportunity to see their immediate reaction to learning about the ruse.

Boom-Boom's heretofore unseen (and never again seen) dad pops up in this issue via a news interview, basically to trash her on live TV. 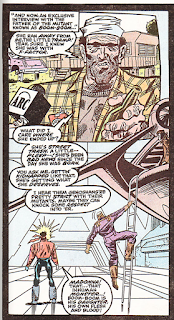 In a nice nod to the character's history, Val Cooper says the government wants Forge to stay out of the Genoshan conflict, as his expertise and abilities are too valuable to risk. Forge, of course, tells her to stuff it.

Opal pops up to babysit Christopher while X-Factor is away, and teases once more her post-"X-Tinction Agenda" plot introduced last issue. 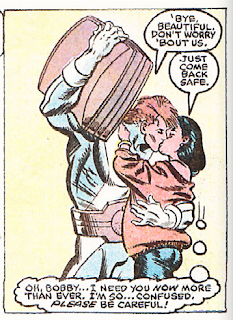 Hodge uses tech from Shaw Industries to monitor X-Factor and the X-Men.

The Reference Section
Escaping the Genoshan Citadel, Boom-Boom notes that the movies make it look a lot easier to crawl through air ducts. 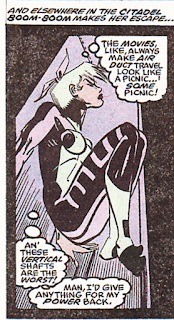 Artistic Achievements
I'm not sure why it bugs me so much, but I've always hated Bogdanove's overly-exaggerated tears in this issue. Something about those big globules oozing down the characters' faces is like visual fingernails on the chalkboard for me.

Teebore's Take
As the first act of "X-Tinction Agenda" comes to a close, this chapter widens the conflict, putting the non-captive elements of the New Mutants, X-Factor and the X-Men into the spotlight (after focusing mostly on Storm and the captured New Mutants in the previous two chapters) as they arrive in Genosha and engage the Magistrates for the first time, leading to a Cyclops/Havok battle that was probably the first thing somebody thought to do after the whole "Havok is a Magistrate" thing got set up. Additionally, this chapter provides a broader view of the overall conflict, both in terms of how the US government and media (a running thread in the story at this point) are responding to the Genoshan threat and in terms of the mixed motivations of the Genoshan leadership, represented by the triumvirate of the President, the Genegineer and Hodge.

Of course, the whole chapter is let down by the art from Jon Bogdanove, whose work, while effective enough in the earlier, quieter scenes (ugly tears aside), is simply too cartoony and exaggerated for the sleek, sci-fi-infused, political thriller tone of the story. It's a problem that will bedevil all the X-Factor chapters of this crossover, an artist whose work isn't necessarily bad but is an ill-fit for this specific story. Plot-wise, it's fun to finally see the combined X-teams in action, including significant interactions between characters like Cable and Cyclops who hadn't really crossed paths much yet at this point; it's just a shame it's not better illustrated.