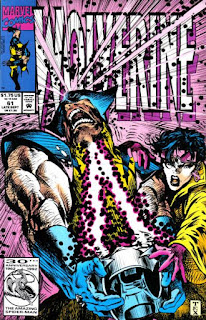 In a Nutshell
Wolverine is approached by Wraith as he assembles their old Weapon X teammates.

Plot
Wolverine wakes up from a nightmare involving Sabretooth & Silver Fox to find the commercial flight he's on has been redirected to the SHIELD helicarrier. Once aboard, Nick Fury informs him that someone with significant pull needs to speak with him, and a helicopter brings Wolverine & Jubilee down to the ground, where John Wraith is waiting. Wraith tosses a Shiva head at Wolverine, which triggers a memory involving Wolverine, Wraith, Sabretooth & Mastodon in Cuba. Wraith then takes Wolverine & Jubilee to his home, where an elderly Mastodon is dying, the age-suppression factor given to him and all the other members of the Weapon X project failing. Worried it could affect any of them, Wraith says he's assembling the old team to try and figure out how to stop it, and Wolverine is shocked and enraged to learn both that Silver Fox is still alive, and that Wraith has Sabretooth chained up in his basement.

Firsts and Other Notables
Mark Texeira begins his ultimately short run as the series' regular artist with this issue (he'll stick around through issue #68, with one fill-in between now and then, before departing for the Sabretooth limited series).

It's confirmed that Wraith power is teleportation (he also appears to briefly change race in the second panel below). We also learn that his Weapon X codename (a la "Wolverine" or "Sabretooth" was Kestrel, and that he's fourth on Shiva's hit list. 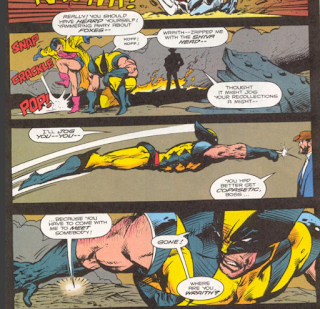 Another Weapon X cohort, Mastodon, aka Elefante, appears for the first time this issue. He is currently dying as a result of the age-suppression factor given to him by the project is failing. In the grand scheme of "characters who were in the Weapon X project with Wolverine", Mastodon is more or less a footnote, and doesn't really appear much outside this story. 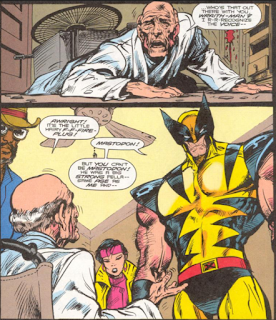 Wolverine learns that Silver Fox is still alive this issue as well. 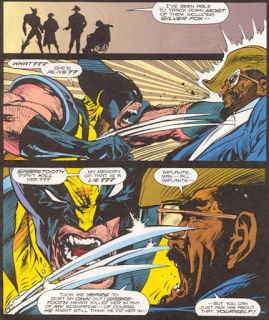 A Work in Progress
Wolverine & Jubilee are picked up by SHIELD off their commercial flight back to America; Gambit has disappeared between issues, as he was in Japan last issue but is nowhere to be found here.

Wolverine is back in his blue-and-yellow costume, after donning the orange-and-brown one for Mariko in issue #57.

This issue confirms that "Carlisle", one of the figures in the shared South American memory implant between Wolverine & Sabretooth, is Wraith.

Omega Red appears briefly, in the flashback to the events immediately following the flashbacks in X-Men #5-7. 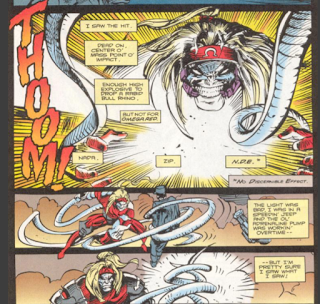 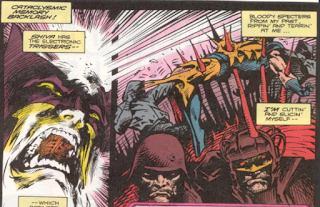 Austin's Analysis
After teasing it last issue and with new regular artist Mark Texeira on hand, Larry Hama takes another deep dive into Wolverine's past, more or less picking up where his last such story, in issues #48-50, left off. Thankfully, where that story was mostly an introspective one, in which Wolverine's chief motivation was "find out stuff about my past", here Hama creates some external motivations, between the ongoing threat of Shiva and the sudden failure of whatever is repressing Mastodon's age (and the fear that other Weapon X project "graduates" could face a similar problem). The end result is more or less a "assemble the team!" issue, and though the team is still mostly a bunch of guys we don't really know or just met (outside of Wolverine & Sabretooth), there's a sense of narrative momentum here beyond the promise of learning stuff about Wolverine that helps carry it.