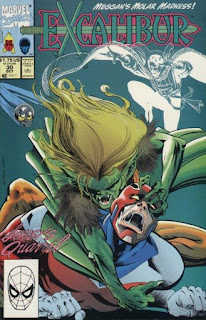 In a Nutshell
When Meggan suddenly turns into a vampire, Dr. Strange is called in to help.

Plot
As Brigadier Stuart arrives at Excalibur's lighthouse for a party in her brother Alexander and Meggan's honor, she's greeted by a strangely-transformed Meggan bursting through the door, followed shortly by Captain Britain. Alexander explains that Meggan has transformed into a vampire and knocked out Rachel, while Alexander has locked Nightcrawler in a closet, fearing he too has turned. Meanwhile, Captain Britain, Lockheed & Widget chase after Meggan, as Alexander realizes they need to call on Dr. Strange for help. In London, Meggan attacks Captain Britain, and when a crowd gathers, she transforms into her normal appearance and claims Captain Britain attacked her, inciting the crowd against him, allowing her to escape. Dr. Strange arrives at the lighthouse and confirms that Nightcrawler is not a vampire, while Captain Britain manages to tackle Meggan just as Widget opens a portal. They arrive in the lighthouse's basement, and Dr. Strange examines Meggan, determining she's being affected by energy released recently by a spell from the Book of the Darkhold. Dr. Strange manages to return Meggan to normal, then departs, as Excalibur begins teasing Alexander for assuming Nightcrawler was a vampire due to his always-fang-like teeth.

Firsts and Other Notables
Marvel's Master of the Mystic Arts, Dr. Strange, guest stars in this issue, along with this then-apprentice, the man-bull, Rintrah (who is possibly Dr. Bitz's second-favorite character, after the good doctor himself). 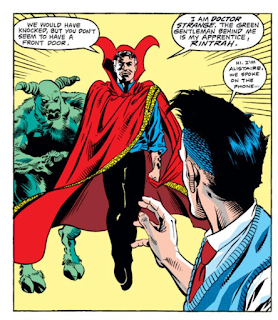 They get called in for help by Dr. Stuart, and Meggan's sudden vampirism is attributed to a spell cast by Marie LaVeau (a fringe Marvel Universe character based on a real life Voodoo queen in New Orleans) in a Doctor Strange story that completed a few months before this issue went on sale, and also possibly due to the presence in Englad of Varnae, the lord of the vampires. 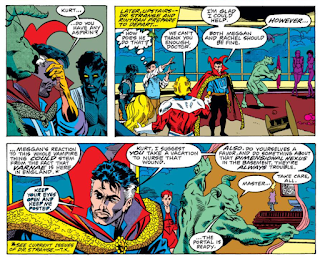 In addition to the Stuart Siblings, Inspector Dai Thomas, Scotland Yard's liaison to WHO, pops up in this issue. 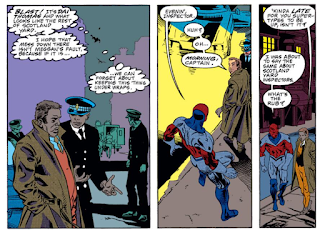 Creator Central
This issue appears to be Dana Moresehead's first professional credit (at Marvel at least), and though she'll only write a few more comics after this, she does a fair number of coloring credits to her name, mostly within the X-office.

Dave Ross, who penciled the Wolverine/Hulk/Mimic story in Marvel Comics Presents, takes his turn on the "who's drawing Excalibur this issue?" wheel.

A Work in Progress
Nightcrawler's medical training (he was the X-Men's field medic for a time) is referenced. 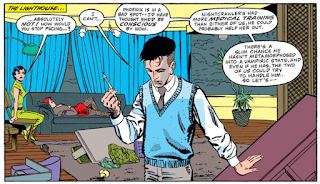 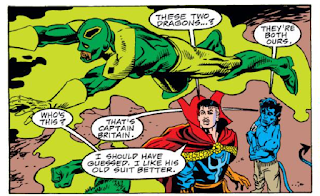 The Grim 'n' Gritty 90s
Wong, Dr. Strange's Alfred, is the subject of a terrible (and mostly-racist) joke when he answers the phone. 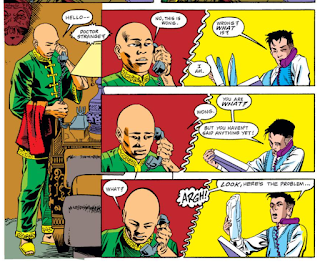 Teebore's Take
Hot on the heels of last issue's Nightmare appearance, this issue brings in Doctor Strange (and Rintrah!) in full force, to help Excalibur battle a wave of vampirism triggered by events in Strange's book. Despite Excalibur once again having a plot informed by events in another random series, this issue is a vast improvement on the previous one (at least as far as stand-alone fill-ins go). In part, that's because of Dave Ross' art, which fits the vaguely-horror tone of the story well and doesn't haven't to work hard to be an improvement on Chris Wozniak's work. But the issue also benefits from the focus on the series' supporting cast, particularly the Stuart siblings. Giving page time to regular, albeit supporting, cast members alongside the guest stars helps the story feel less random, and the issue more a part of the series' ongoing narrative than most of the other fill-ins of late. Though none of the main characters really get much in the way of character development or narrative advancement, the art, the tone of the story, and the inclusion of some the series' supporting cast help make this feel like less of a throwaway one-off.