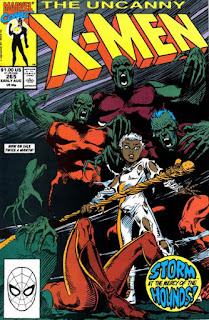 In a Nutshell
Storm attempts to evade the Shadow King.

Plot
In outer space, the champion of the P!ndyr race falls back to his planet, defeated in single combat by the Shi'ar champion, telling his lifemate that in the face of such power, their people don't stand a chance. On Earth, Storm steals from the head of a local drug cartel, then uses her nascent mutant powers to trigger the alarms, leaving him for the police as she escapes. However, her powers draw the attention of Nanny, who is plotting to bring Storm back into her fold, having already reduced her to childhood. In Washington DC, the Shadow King, in the body of FBI agent Jacob Reisz, meets with Val Cooper, and telepathically ensnares her just as he has Dr. Lian Shen. 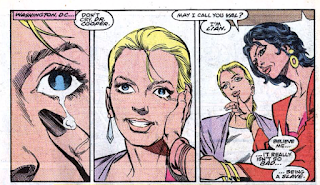 Back in Illinois, Storm dreams of her childhood, the memories shifting into visions of being hunted by Nanny and the Shadow King, as her mind struggles to remember her time with the X-Men. Meanwhile, the Shadow King has set a trap for Storm, using Reisz's deductive skills to determine Storm's next likely target, a house containing several stolen paintings. As Storm breaks into the house, she's attacked by its residents, whom the Shadow King has mentally transformed into his Hounds. Storm tries to escape, but is overwhelmed before finding herself face to face with the Shadow King.

Firsts and Other Notables
This issue reveals that Kid Storm is, in fact, the real Storm, reverted to childhood by Nanny off panel during the events of Uncanny X-Men #248, the idea being that Nanny wanted to save Storm from the Reavers but, as she only helps child mutants, she was forced to make Storm a child in order to protect her. Storm herself, however, remains unaware of this, and only possesses the memories she had from when she was originally a child of the same age, and as such is getting by via stealing, as when she was originally a child, though she is only stealing from criminals. 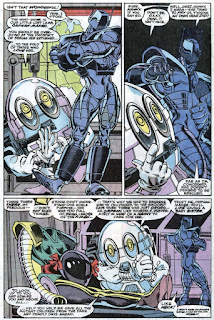 Val Cooper comes under the thrall of the Shadow King in this issue, just as Colonel Vazhin warned in the previous one, and Mystique is set up as his next target. 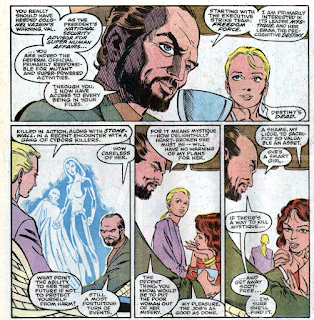 Shadow King has a group of enthralled individuals serving as his henchmen, called Hounds. What exact relationship, if any, these Hounds have to the futuristic Hounds of Ahab, as seen in "Days of Future Present" and who once counted Rachel Summers amongst their number, has yet to be definitively established (it's also not established where he gets the Hounds' leather bodysuits). 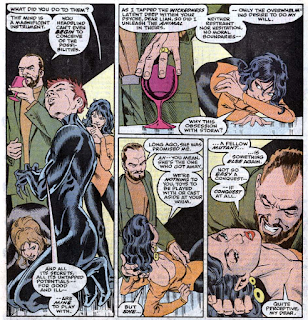 We get a brief hint at just why Shadow King is so obsessed with Storm, as he mentions that she was "once promised to him". I don't believe we ever get much in the way of follow-up to that cryptic note, though.

This issue opens on members of the alien P!ndyr, one of whom is sent forth to battle with the designated champion of the Shi'ar Empire, who turns out to be a powerful telepath, all of which is setup for the post-"X-Tinction Agenda" Shi'ar story that runs through issues #274-#277. 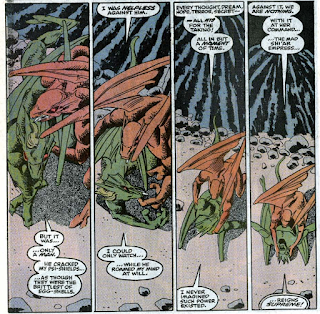 Creator Central
Bill Jaaska returns to draw this issue, his final fill-in work on this series. The alien/space stuff actually features some nifty panel layouts, but the rest of the issue is fairly ho-hum, and features the same quasi-grotesque figure work found in issue #263 as well.

A Work in Progress
Kid Storm is continuing to develop her powers, but they remain raw and hard to control. 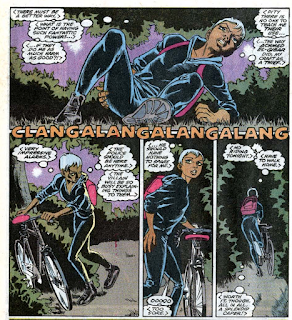 Claremontisms
Storm's current residence is inside an old airplane at an airplane junkyard, which is just so Claremont it hurts.

For Sale
There's an ad for the movie Arachnophobia in this issue, which is one of those movie posters that always caught my eye as a kid. 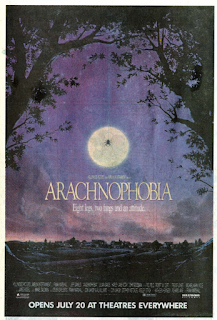 It's in the Mail
Jim Lee's upcoming return to the series as the book's regular artist is announced in this issue's letter column, and though it says he'll be joining the team with issue #268, he actually starts with #267.

Teebore's Take
Bringing the Kid Storm plot thread back to the forefront after leaving it simmering since issue #255, this issue once again suffers under that most familiar refrain from this era, lackluster art. But the three issue arc that kicks off here also isn't helped by the fact that Kid Storm, while not a terrible idea, is a somewhat misconceived one, and certainly neither as great nor compelling an idea as Claremont seems to think it is (so much that he returns to it, and doubles down on it hard, in his X-Men Forever series years later). It's not a suspension-of-disbelief-breaking premise on the level of Tentacle Jean Grey (in that there's at least some thematic and character resonance in the idea of Storm being reduced to an amnesiac child discovering her powers for the first time), but it comes really close. It's a very "only in comics..." kind of development for the character, and not in the good way that phrase can sometimes imply.

It also doesn't help that the culprit behind Storm's transformation, officially confirmed as Nanny in this issue, isn't exactly setting the world on fire in terms of X-Men villains, and while Nanny's whole schtick certainly fits as an explanation for why Storm is now a kid, Nanny as a character doesn't really have much of a connection to the X-Men or their larger themes. So two already-dubious elements are made the worse by their proximity to each other: Kid Storm is a questionable development for the character, made moreso by Nanny being cause of her condition, and Nanny, who can work fine as a one-off antagonist in the right story, suffers under the weight of expectation when she's linked to a larger story that effectively sidelines, then significantly transforms, one of the book's main characters for dozens of issues. Take all that and render it via some unremarkable art, and the end result isn't exactly one of the series' finest hours.

Next Issue
Tomorrow, Rob Liefeld takes a break for New Mutants #92 and Friday, more fun with the Ravens in X-Factor #57. Next week: Gambit!