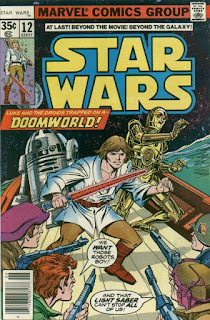 In a Nutshell
Luke meets on faction on Drexel, while Han & Leia reach the planet aboard Crimson Jack's ship.

Plot
On Drexel, Luke Skywalker watches as three ships attack the sea serpents, driving them off, but at the cost of two of their skimmers. They spot Luke's escape pod, and bring him aboard the remaining ship. They claim the droids in the name of their governor, but Luke makes it to the cockpit of the ship and orders them to leave the droids be and take them to their governor, or he'll fuse the controls with his lightsaber, leaving them to the mercy of any passing Dragon Lords. They shortly arrive at their base, a massive city composed of floating ships connected into one large land mass. Luke is introduced to the governor, Quarg. His curiosity sparked by his men's claim that Luke is a Jedi, Quarg agrees to hear Luke out and leads him inside, while Luke wishes to himself that he had Han's gift for gab, or that the Millennium Falcon would suddenly appear and blast them free.

Meanwhile, aboard Crimson Jack's Star Destroyer, en route to Drexel, the pirate tells Han of how he came to claim the ship for himself, but they're interrupted by reports that Jolli has gone crazy. On the ship's main deck, they find her attacking several of the pirates, saying they tried to kiss her. Jack disarms her, and she says it's all Princess Leia's fault, for getting Jolli thinking positively about men after telling her how well Han kisses. Just then, the ship drops out of hyperspace near Drexel, and when sensors reveal it to be a water world, Crimson Jack angrily asks Han how the Rebels could possibly have a treasury there. But Han assures Jack everything is okay, and asks him to bring Leia to the bridge so he can prove it. Or, he thinks to himself, die trying.

Firsts and Other Notables
Governor Quag, the leader of one faction on the planet of Drexel, appears for the first time. He and his men principally use wooden (or some approximation thereof) ships with sails, along with some bits of stolen technology, in their war with the Dragon Lords (the beings who ride the massive sea serpents) and covet new tech. 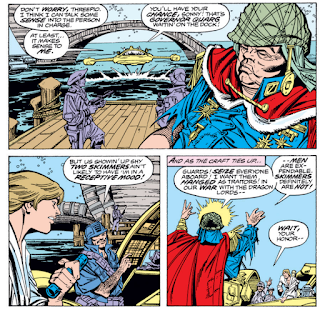 A Work in Progress
A Verullian land slug is, given the context, some kind of large, lumbering creature.

Um, Actually
Luke lightsaber is incorrectly colored red on the cover and throughout the issue.

A common problem in Star Wars fiction, the lore of Jedi and their role in the galaxy is treated like hazy history, the details lost to time, by Quag's men, even though the Jedi were only decimated and sent into hiding less than twenty years ago at this point (the common in-universe explanation being that even in the heyday of the Jedi, as numerous as they were, whole societies could go their entire existence without encountering a Jedi if they were far enough off the beaten path/not the site of any prominent trouble/galactic disputes). 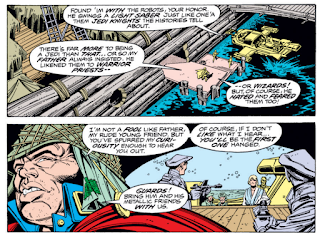 Han refers to Crimson Jack's ship as going to warp, a term commonly used to describe the means of faster-than-light travel on Star Trek, whereas in Star Wars the term is either "lightspeed" or "hyperspace". 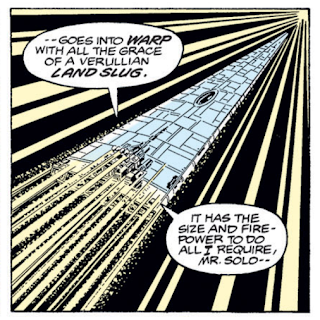 Chewbacca is said to be a hundred-year-old Wookiee. He is, in fact, two-hundred years old.

The Star Lexicon
The vehicles used by Governor Quag's men are called "hydra-craft", and Luke says they remind him of his landspeeder, only they fly over the water. We would call them "boats". 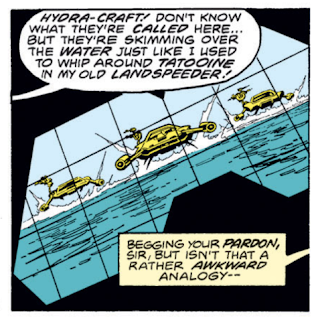 Quag's men use the term "Star-hoppers", suggesting it's a term used throughout the galaxy and not just by Han/on Aduba-3. They, like, Roy Thomas, refer to the droids as the more generic term, "robot".


Remember Star Wars?
Luke thinks back on Obi-Wan's duel with Darth Vader in issue #4, a one-panel flashback to the events of the movie. 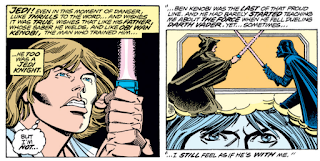 Young Love
Jolli's "anti-men" stance has apparently been softened on account of Princess Leia telling her how great a kisser Han is last issue. 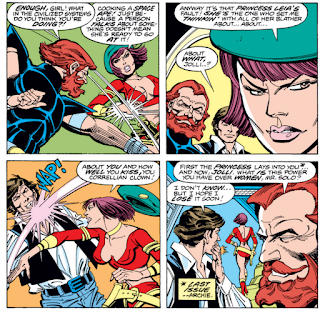 For Sale
There's a half dozen different house ads in this issue (not surprising, given the series' popularity), including one for Marvel's various licensed series features characters from Robert E. Howard and Edgar Rice Burroughs. 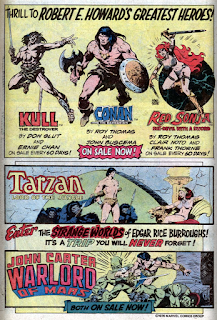 And another featuring Howard the Duck, made all the more interesting for the future relationship between Howard and LucasFilm. 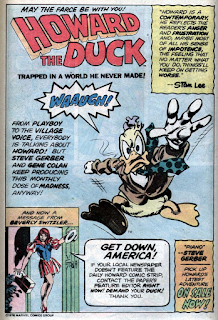 Teebore's Take
Split about evenly in half, with Luke on Drexel the focus of the first half and Han aboard Crimson Jack's ship the focus of the second, this issue nonetheless represents the most page time Luke's gotten since the end of the movie adaptation, and it's good to see him back at the forefront. Goodwin seems to have a solid grasp of his character, making him an active, reasonably-competent protagonist but who still has doubts about his abilities and choice of action. Both the scene where he laments that he's not truly the Jedi Governor Quag's men believe him to be and the one where he wishes he had Han's con man style are effective moments of characterization. Infantino, meanwhile, presents a Luke who is traditionally heroic visually (including giving him a longer mane of hair) but doesn't tip into the realm of the superhuman, though I'm still not a big fan of Luke wearing his Tatooine farm boy garb (or Leia the white dress she wore through most of the movie) everywhere he goes; I much prefer the current Marvel series' decision to make the clothes he wore to the medal ceremony at the end of the film his day-to-day attire.

The unfolding status quo of Drexel, meanwhile, is a mixed bag. The idea of a truly ocean-based world (shades of the future homeworld of Admiral Ackbar's Mon Calamari) is intriguing, as is the idea of one faction on that world coveting high technology, a classic sci-fi idea that fits the aesthetic of Star Wars well. And, of course, the reveal that Drexel is water-covered and thus less likely to support a Rebel base (and the resultant treasury) puts an entertaining wrinkle into the con Han's running. But the idea of Quag's faction being depicted almost like 17th century pirates straight from Earth, including large, wooden sailing ships and clothing reminiscent of Earth sailors and admiralty, sits awkwardly in the Star Wars universe (even with the given explanation that tech is hard to come by on this world), while at this juncture it's still unclear if the reason Drexel is such a feared world is because of the tech-hoarding, the so-called Dragon Lords, or something else entirely. But there's nonetheless enough intriguing elements on hand, as well as the promise of the main cast reuniting, to keep this entertaining, and to give the story the benefit of the doubt at this early juncture.

Next Issue
"Day of the Dragon Lords!"