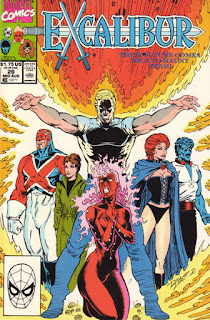 In a Nutshell
Excalibur battles Mastermind

Plot
Rachel dreams of her past, of Franklin Richard's death during the X-Men's escape from the Sentinels' internment camp, yet wakes feeling refreshed. She and Kitty decide to go shopping, and while looking at clothes, Rachel runs into someone who looks like Franklin. He tells her that Kate Pryde sent him back to the past to tie up some loose ends from their attack on Project: Nimrod, and he and Rachel joyously embrace. When they return to Excalibur's lighthouse, Lockheed and Widget are suspicious of Franklin, while Franklin suggests to Rachel that she use a psi-link to fill him in on what she's experienced since coming to the past. Acting on Lockheed's suspicions, Kitty tries to go up to Rachel's room, but finds a strange force preventing her from doing so. Meanwhile, Franklin uses the psi-link to tap into Phoenix's power, overjoyed to once more be one with the cosmos.

Below, Kitty, with the help of Nightcrawler and Meggan, realizes who Franklin really is, while on Muir Island, Moira MacTaggert notices something odd in one of her holding cells. Back at the lighthouse, Kitty poses as her future self and Meggan as the Black Queen to shake Rachel out of her stupor and force Franklin to reveal himself as Mastermind, who also reveals that he's been hiding in their midst as Captain Britain. Enraged, Rachel attacks Mastermind, but Kitty prevents her from doing something she'd regret. Later, the team is reunited with the real Captain Britain, who had been placed in Mastermind's cell on Muir Island. Mastermind has been returned there, though he doesn't realize it, Rachel having made him think he succeeded in gaining the power he craved.

Firsts and Other Notables
This is another fill-in inventory story set before the "Cross-Time Caper", though once again the chronology is wonky as Widget is seen in this issue flying around and interacting with the team (especially Lockheed), even though he was barely functional as the "Cross-Time Caper" began and it wasn't until well into that story that he interacted with Excalibur much.

Appearing for the first time since his attack on Cyclops and the X-Men in Uncanny X-Men #175, Mastermind attempts to gain control of Phoenix's power in order to reclaim the cosmic awareness he received from the original Phoenix in X-Men #134 (which doesn't make too much sense, since that experience was sad to drive him mad). He'll next appear in Uncanny X-Men Annual #17. 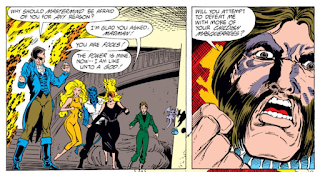 This issue suggests that Captain Britain's strange behavior (presumably, the way he's treating Meggan) is a result of Mastermind having infiltrated the team pretending to be Cap (having locked the real Captain Britain in his cell on Muir Island, where I guess he ended up after the events of X-Men #175?). It doesn't really work, for several reasons, chiefly that Phoenix is a high-powered telepath and should have figured it out, especially without White Queen around to boost/disguise Mastermind's abilities as in the "Dark Phoenix Saga", and also because Captain Britain's caddish behavior towards Meggan more or less continued uninterrupted throughout the "Cross-Time Caper", after the real Cap rejoined the team in this issue.

Also, Moira should really check on her prisoners more often, or at least, you know, put some cameras in their cells or something.

A Work in Progress
Kitty gains access to her memories of "Days of Future Past" in this issue - that is, her memory of what was going on around her while unconscious in the body of her future self, so nothing terribly clear. 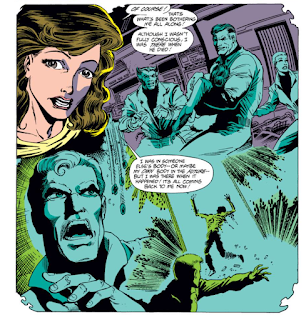 Nightcrawler teleports himself, Meggan and Kitty with ease, something he shouldn't be able to do at this time. 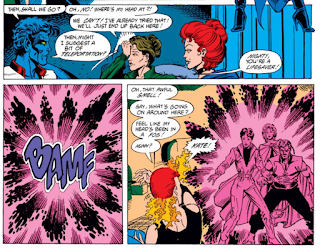 Teebore's Take
In theory, the idea of a story where Phoenix faces off against Mastermind is a good idea. Given the villain's prominent role in the "Dark Phoenix Saga" and the corruption of Rachel's mother, and Rachel's later adoption of the Phoenix mantle, there's a lot of story potential to be mined from an encounter between the two. In execution, at least in terms of this story, most of that potential is squandered. To start with, such an encounter probably deserves more than an issue to play out. Secondly, such a story should be handled by the regular creative team and not in what is, by all accounts, a fill-in inventory story, something created outside the confines of the regular series and shoved in a drawer until the Dreaded Deadline Doom strikes. Thirdly, Mastermind's plan in this story involves making Rachel think that Franklin Richards from her timeline is alive and well; watching Rachel interact with a seemingly-alive Franklin was just a big part of another story ("Days of Future Present"), and while it's not these creators' fault (assuming this is an inventory story, when crafting it they would have had no idea it would be published so close to another Franklin/Rachel-centric story that probably wasn't even in the works at the time), the repetition nonetheless does this issue no favors.

Likewise, the idea of Mastermind infiltrating the team as Captain Britain isn't an inherently bad one, and it's presented here like the payoff to a big mystery, a stunning revelation to a simmering plotline. But it's not. Sure, Captain Britain has been acting strange, but not to the point that many openly questioned it much, and not to the point that revealing him as Mastermind makes much sense. Furthermore, if we are to believe that Cap was Mastermind at some point in the book's history, given the repercussions of that idea, it definitely seems like something that shouldn't be revealed by a fill-in creative team in an inventory story. The end result is a story that is clearly meant to be revelatory and shocking, both in terms of Phoenix encountering her mother's tormentor and the reveal that he's been amongst the team for awhile now, but it really just creates a confusing chronology on the back of a fairly nonsensical plot twist, and is probably best forgotten.