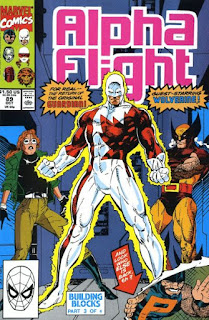 In a Nutshell
Wolverine and Forge independantly help with the re-formation of Alpha Flight.

Plot
Issue #87: During the course of a parliamentary hearing on the relationship between the government and Alpha Flight, it is decided that Gamma Flight will be disbanded, something which prompts Gamma Flighter Wild Child to fly into a rage, nearly killing one of the committee members. Heather Hudson leads Alpha Flight in an attempt to capture Wild Child, but it is ultimately Wolverine, in Canada to tie up loose ends, who manages to do so. Meanwhile, Box and Diamond Lil have secretly been dispatched by the government to a Roxxon Oil facility in Denver, in order to help reign in some out-of-control machinery. But when Box attempts to do so, he discovers a very angry consciousness is controlling the machine.
Issue #88: Heather hands Wild Child over to the authorities, but when she learns that Wolverine's healing factor is fading, she suggests that a transfusion of Wild Child's blood might help. They break into the facility where Wild Child is being held, only to discover that he's missing. Meanwhile, Val Cooper suggests Box and Diamond Lil contact Forge. Arriving on Muir Island, the Alphans are attacked by the X-Men there, but Forge ultimately agrees to help them. However, when they arrive back at Roxxon, the mystery man controlling the machinery reveals himself to be Alpha Flight's believed-dead founder, James Hudson. 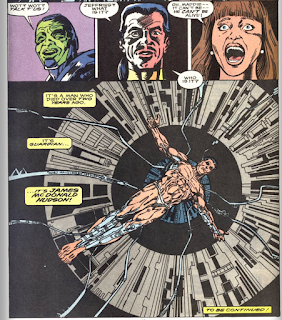 Issue #89: Wolverine and Heather track Wild Child to a mine, where they find him with the rest of Gamma Flight. They declare they'll look after Wild Child no matter the cost, which prompts Heather to respond that she'll get Wild Child even if she and Wolverine have to take out every one of them. In Denver, James Hudson attacks until Box & Forge merge together and manage to reach him. Box reminds James of all the great things he's done, and of Heather, and James snap out of it, declaring that he's alive.

Issue #90: Heather and Wolverine battle Gamma Flight, with Gamma Flighter Nemsis saying all she wants is for Wild Child to have the same chance at normalcy that Wolverine got. When Wolverine insists that Wild Child is beyond redemption, Nemesis vanishes along with Wild Child, and Heather isn't sure if they were killed or just teleported away. She's concerned that Wolverine won't be able to use Wild Child's blood, but he's not, and takes his leave after convincing Heather she needs to lead Alpha Flight no matter what. Later, Heather is reunited with James, and shortly thereafter the government formally announces the re-creation of Department H to support Alpha Flight. Heather, taking the name Guardian, pledges the team to the defense of the world, though Puck wonders what they'll do with thirteen members.

Firsts and Other Notables
The two notable guest stars in this story are Wolverine and Forge, though of course, since Forge is about to leave in search of the X-Men as this story begins, the two never cross paths, and remain isolated in two different plot threads from another throughout the four issues.

Wolverine's long-time friend Heather Hudson learns he's alive in issue #88. He apologizes for making her think he died with the other X-Men, and says that he's revealed himself to her in order to make amends, strongly hinting that he'll be dying for real soon, a nod to the "weakened, overtaxed Wolverine" subplot in Uncanny X-Men (which Claremont ultimately planned to culminate in Wolverine's death, though of course he left the series before getting to that). 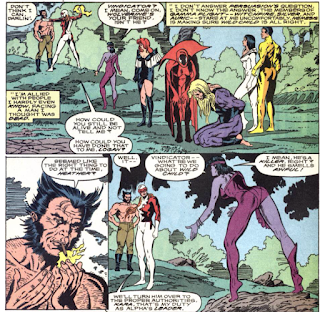 My knowledge of Alpha Flight, beyond their initial appearances in X-Men and roughly the first dozen issues or so of their series, is shoddy, at best, so a lot of the recurring plotlines that get referenced and/or tied up in this story went mostly over my head (for example, obviously the relationship between Alpha Flight and the Canadian government is a plot point in this story, but I have no idea what it was before this story or what caused it to be called into question). As such, I can tell there's a ton of significant-to-Alpha Flight-and-its-characters things that happen in this story, but I don't know enough about the background to feel comfortable calling them out. If anyone out there is a big Alpha Flight buff and wants to provide some context in the comments, go to it!

There are two Alpha Flight-related things that happen in the course of this story that I am versed enough to mention: Heather Hudson trades in the name Vindicator for Guardian (her husband's former codename), prompted by a bit of dialogue suggesting she's Canada's guardian, while her husband James Hudson, who died in Alpha Flight #12, returns from the dead, and assumes the identity of Vindicator (though I understand his condition of being alive is one of the more nebulous things in Alpha Flight history (he's currently dead, I believe, and there was a period in the 90s where he was either a robot or a de-aged version of himself, if memory serves) so I have no idea how long he stick around following this story). Val Cooper guest stars in issue #88, suggesting Forge as someone who could help Alpha Flight.

The Muir Island X-Men then make a brief appearance, when Alpha Flight goes to enlist Forge's help, though Sharon Friedlander is referred to as Mary Friedlander. 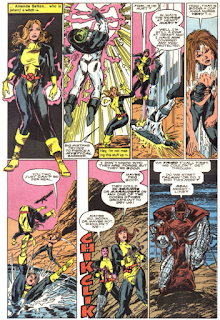 Creator Central
These issues on sale at the same time as he begins his run on X-Men, Jim Lee, whose earliest Marvel work was on Alpha Flight, provides the covers to all four.

Future X-Men writer Fabian Nicieza writes all four issues. Art comes from Michael Bair, an artist with whom I'm not familiar and whose work I don't think I've ever seen before.

The Chronology Corner
Forge's appearance (as well as the rest of the Muir Island X-Men) in this story occurs between Uncanny X-Men #258 and #259, before he and Banshee left Muir Island to search for the X-Men.

Wolverine, meanwhile, similarly appears between his appearances in X-Men #258 and #261, which fall between issues #23 and #24 of his solo series.

A Work in Progress
Wolverine's encounter with Wild Child in Marvel Comics Presents #51-53 is twice footnoted in issue #90, with Heather learning that it was Wolverine who saved her from Wild Child in that story (at the time, Wolverine was still determined to keep his continued survival a secret from Heather). 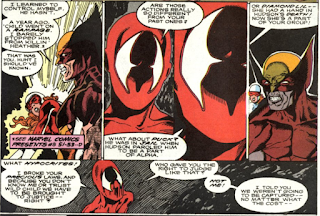 The Reference Section
At the end of issue #90, as the newly-minted roster of Alpha Flight stands assembled, Puck asks, "what are we going to do with thirteen Alphans?", a reference to the line which ended Giant-Size X-Men #1 and asked a similar question about X-Men. 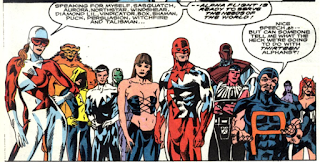 The Best There is at What He Does
In issue #88, Wolverine notes that he's not healing as fast as he used to, a reference to his overtaxed healing fact, as seen in X-Men. 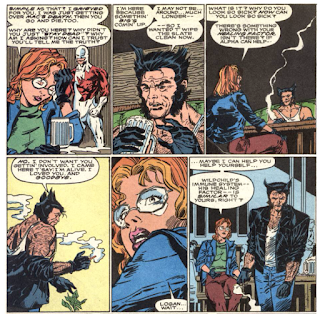 Teebore's Take
The appearances of Forge and Wolverine in these issues was obviously intended to put some more eyes on Alpha Flight (especially Wolverine, who's appearance in the story is touted on all four covers) at a time that, given the context of the story, the series was preparing to move in a direction, a tried-and-true method of comic book marketing. Unfortunately, the new direction of the series (if that is, indeed, what this is) really doesn't get established until the very end of the story, when the final lineup of the team moving forward is unveiled. Instead, this four-parter is mostly concerned with wrapping up lingering loose ends from the book's previous direction: the role of Wild Child and Gamma Flight in the book, dealing with whatever happened to Puck (one of the plot lines running through this story which I didn't summarize since no X-Men intersected it), and bringing back the group's founder, James Hudson.

The end result, unfortunately, is kind of a mess for anyone who wasn't already reading Alpha Flight, and thus, counter-productive to the whole reason for bringing in Wolverine and Forge. Coming to this series as an X-Men reader with a passing knowledge of the series, there's a lot here that goes unexplained, including characters popping up with no explanation of who they are or why they matter, relationships between characters that are given little context (I believe, thanks to Madison Jeffries' future role in later issues of Uncanny X-Men, that he and Diamond Lil are married in this story; if so that's never established), plot threads that are continued or resolved with scant explanation of what came before. For any given story, that's not too much of a problem; for one that seems designed, given its name and its ultimate conclusion, to launch a new direction for the title and which, by means of its guest stars, was meant to be read by an audience outside the series' regular readership, it seems a failure of purpose.

In terms of what this story means for the X-Men, the Forge appearance is mostly superfluous; pairing him up with Alpha Flight's technopath and future X-Men support staffer Madison Jeffries is cute and makes sense, given the similar nature of their mutant powers, but beyond that his appearance doesn't do much to advance his character or his current narrative arc. With Wolverine, we get a rare instance of the character actually reaching out to an old friend to reveal his continued survival and apologize for the ruse, while at the same time, tying in his appearance to the larger "Wolverine is getting weaker and losing some steps" subplot more directly than anything happening even in the character's solo series, while also acknowledging the events of the seemingly-superfluous, Liefeld-drawn Wolverine/Wild Child story in Marvel Comics Presents. For X-Men readers who don't otherwise read Alpha Flight, all that stuff alone probably makes these issues worth reading, even if they have to skim over a lot of intensive Alpha Flight continuity while doing so.