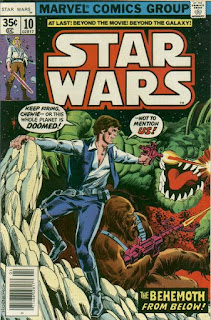 "Behemoth from the World Below"
April 1978

In a Nutshell
The Star Hoppers contend with the massive creature set loose on the Cloud Riders.

Plot
The Behemoth makes short work of the Cloud Riders, with Han Solo and his team doing their best to avoid the collateral damage caused by the creature's rampage. Realizing the village elder is controlling the beast, Serji-X targets him, hoping that killing the elder will stop the beast. However, before he can strike, the monster crushes both Serji-X and the elder under its massive foot. With the Bbehemoth out of control, Han rallies the Star-Hoppers to stop it, before it destroys the village. Han has a plan, which requires Don Wan's lightsaber, but as he turns to ask for it, he discovers that Don Wan is already approaching the monster, determined to slay it himself. 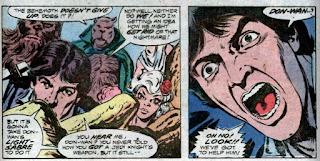 Meanwhile, Princess Leia leaves Yavin 4 in search of Luke. Back on Aduba-3, as Don Wan approaches the creature, Han realizes his hunch was correct: the lightsaber acts like a lightening rod for the Behemoth's energy blasts, and seems to make the beast act erratically. Fearing Don Wan isn't fast enough to get close to the beast before being killed, Han has Chewbacca race him out to where Don Wan is making his stand. Grabbing his lightsaber, Han rushes in close enough to plunge the blade into the behemoth's chest, after which it disintegrates. In the aftermath, the Star-Hoppers receive their meager pay from the villagers, and the Starkiller Kid decides to stay behind with Merri. The rest head back to the space port, with Han pleased that he at least has enough to get the Millennium Falcon out of hock, and that he got to feel, at least for a minute, what it was like to be a Jedi Knight.

Firsts and Other Notables
This is Roy Thomas and Howard Chaykin's last issue of the series. As evidenced by the influx of additional artists over the last few issues, Chaykin was clearly never that invested in this series, something Thomas has said he thought showed in his work. Meanwhile, Thomas has said he left the series due to the constraints put on him by George Lucas (including Lucas' previously mentioned disdain for Jaxxon), as well as the fact that the creators involved (including himself) weren't making much more than usual on the series despite its huge success.

Thomas penned a message to the readers declaring his and Chaykin's departure, along with their reasons for leaving (in general), which appeared in this issue's letter column. It also announces Archie Goodwin and Carmine Infantino as the new creative team starting with the next issue. 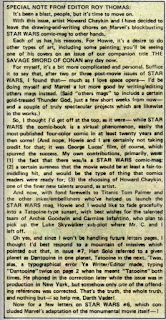 Don Glut, who will go on to write the novelization of The Empire Strikes Back, is credited as scripter on this issue.

I believe this marks the final appearance of all of the Star Hoppers, except for Jaxxon (who will pop up again in a later story).

A Work in Progress
Don Wan Khiotay, who seemingly died last issue, turns up alive and well in this issue. Hedji the Spiner, however, dies in this issue.

As does Serji-X, slain by the monster, with most of his Cloud Riders also killed or scattered.

Before he dies, he mention that the town elder which summoned the beast had threatened to do so in previous years during the Cloud Riders' raids, confirming this was something he always could have done, but not answering the question of why it took the third year of raids for him to do so.

Han Solo wields a lightsaber for the first time in this issue, well before his first on-screen use of one, in Empire Strikes Back.

"Maze flies" are mentioned as a kind of flying bug, while Han at one point curses "Holy beek monkeys!", whatever those are.

Um, Actually
The droids are once again referred to as "robots". 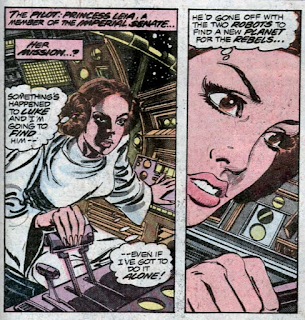 Roy Thomas on leaving Star Wars
"I came to feel that Howard Chaykin, for whose artwork I've always had the utmost respect, wasn't giving his all on the pencil layouts. As I learned later, he was actually being ghosted part of the time by our mutual friend Alan Kupperberg, who was doing a creditable job - but Chaykin is Chaykin. Nobody else is. Howard is definitely one of the post-Silver Age great artists, with American Flagg perhaps his greatest single accomplishment.

And then one day I got this phone call from Charlie Lippincott.

He informed me that George [Lucas] was unhappy with the way the storyline was going. I reminded Charlie that I'd cleared it in advance, but Charlie said that George thought that it was too close to The Magnificent Seven (who knows, maybe it was). What's more, George particularly disliked one of the Seven being a six-foot alien whop resembled a green Bugs Bunny in space gear. In the latter instance, I had been "inspired" in part by seeing a Porky Pig-looking alien in the Cantina sequence, either in the rough cut or on some production sketches at some early point (I don't remember if that alien appears in the finished movie, since that part of the film contained several 11th-hour inserts of other, more colorful aliens sitting in dark corners, and something may have been cut to make room for them.) I had figured my "green rabbit" Jaxxon wasn't really much weirder than a Wookie, but obviously George, as the creator of the Star Wars mythos, felt differently. I respected George and Charlie, but this line of conversation was beginning to annoy me.

That's not to say George was necessarily wrong, of course. And in some way, his very rightness may be the point. I had discovered by now that, love the movie though I did, I really had little interest in continuing to handle the comic book version. Star Wars was George Lucas' fantasy, not mine.

At the same time, I'll admit that I was feeling a bit put off, too, re certain monetary matters.

It was an open secret that Alan Dean Foster had ghosted the Star Wars novel that came out circa spring of 1977, even though the byline read "by George Lucas" - and that George had given Foster a sizable bonus when the movie proved a smash. And of course everyone knows how George gave Mark Hamill, Harrison Ford and Carrie Fisher valuable "points" in the picture, as an after-the-fact gesture of good will.

I didn't begrudge any of that quartet their good fortune - they all earned it - but I, who had fought to get Star Wars published as a comic book at a time when George and Charlie really, really wanted it adapted as a comic, had never received even a thank-you...or, more crucially, a single cent beyond my regular page rate from Marvel, and $2 per page each time (or at least most times) that Marvel reprinted the first six issues. By pointedly asking Star for a bonus at one point, I finally got an extra $500 for my Star Wars labors, but I wasn't exactly feeling appreciated on any front with regard to my work on the adaptation."

Thomas, Roy. "Star Wars: The comic Book That Saved Marvel! How I Learned to Stop Worrying and Love Star Wars - With Reservations." Alter Ego #68. May, 2007:75

Teebore's Take
Star Wars' inaugural original story wraps up with some of the series' most consistent art yet. With three separate artists credited to the issue, it's unclear (to this artisitic layman, at least) who is responsible for what, though Tom Palmer's linework is present throughout, which gives the whole thing a consistency that should probably be lacking when three artists are involved. Chaykin, when inked by Leialoha, turned in some stronger individual panels or pages during the film adaptation, but the art throughout this issue succeeds on a more consistent level, helping the storyline end on a visually strong note.

Story-wise, the conflict with Serji-X wraps up fairly perfunctorily, as the Godzilla-like monster makes short work of the Cloud Riders. The emergence of the beast is, perhaps, a bit too comic book-y for the more space fantasy world of Star Wars, but it's not too much of a reach for the world Thomas and Chaykin have briefly sketched out in the previous three issues, and they're careful to keep Han and the Star-Hoppers from just fading into the background while the beast rampages, while making sure Han himself is involved in the final defeat of the creature, his take-charge attitude still feeling a bit out of character but certainly befitting the clear protagonist of this story. It's not the strongest of endings, but it's an ending.

Overall, it's hard to hold this story up as an all-time Star Wars classic. Han spends most of it slightly out of character, the newly-introduced supporting characters aren't nearly as awesome as Thomas and Chaykin seems to think they are, and the world-building is still rough around the edges. But it's not a complete waste, either. Tom Palmer's arrival kicks the art up a notch or two, and drawing inspiration from Western tropes keeps the plot from straying too far from the style of the film, helping offset some of the more curious and tonally dissonant decisions (like Jaxxon). Ultimately though, this is a story where most of the entertainment value comes not from the story itself, but for the way it depicts the nascent expanding Star Wars universe, as a record of two creators with both too much and too little guidance doing their best to build on the mythology introduced by the film. The end result is far from perfect, but there's some enjoyment to be found in the effort, the successes as well as the missteps.

Next Issue
What happened to Luke?