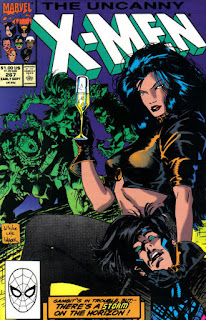 In a Nutshell
Storm regains her memories as Jim Lee begins his run as series artist.

Plot
Dr. Shen leads the Hounds in an attack on Storm and Gambit at the airplane junkyard, prompting Storm to use her power to lift her plane into the air. A pair of Hounds leap aboard, but Gambit fights them off. Just then, their plane is targeted by Nanny's ship. The encounter with Nanny shakes some of Storm's memories, but Gambit manages to blast Orphan Maker, forcing Nanny to retreat. Later, Storm awakens from nightmares of being captured by Nanny in New Orleans, having learned the city in the intervening weeks from Gambit. Together, they act as a pair of Robin Hoods, robbing from the rich to give the poor, until Nanny catches up to them once again. 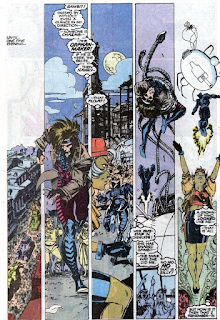 After Orphan Maker captures Gambit, Storm steals aboard Nanny's ship, where she finds herself powerless. However, the surroundings further jog her memory, and she remembers everything about her past, including Nanny transforming her into a child. Donning the suit of armor Nanny intended her to wear, she defeats Orphan Maker and frees Gambit, who triggers an explosion which sends the ship crashing into a swamp. Emerging from the water, Gambit assures Storm there's no chance Nanny and Orphan Maker could have survived, while noting that she suddenly sounds older. She agrees that she's no longer quite the girl he befriended, then asks if he's ever heard of a band of mutant heroes called the X-Men.

Firsts and Other Notables
This issue marks Jim Lee's return to X-Men (following his fill-in on issue #248 and pseudo try-out in issues #256-258) and the beginning of his regular run on the series, which will last through issue #277, after which he'll help launch the second regular X-Men book, which he'll draw through issue #11, before leaving to co-found Image Comics.

For anyone who hasn't already read X-Men Annual #14, this issue depicts Storm fully regaining her memories after encountering Nanny aboard her ship, the sight of Storm's initial transformation, though she remains trapped in the body of a child.

This issue also depicts the way Nanny fooled the X-Men into believing Storm is dead, revealing that the body they buried in issue #249 was that of Life Model Decoy configured to look like Storm.

Her actual transformation into a child is also depicted via flashback later in the issue. 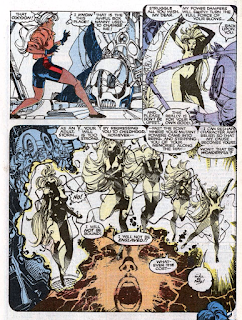 Gambit uses a playing card as a weapon for the first time this issue, which will become his celebrated weapon moving forward. His power is still being depicted as coming from his eyes, though it's noted that he releases stored up force to make things explode.

Also, there's a scene in this issue in which Gambit uses a broomstick like a bo staff, likely either a hint at or the genesis of his future regular use of a staff. 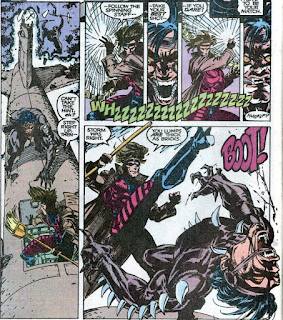 Gambit's connection to New Orleans is established this issue, as he and Storm flee there after the Shadow King's attack, and Gambit shares his knowledge of the city with Storm. 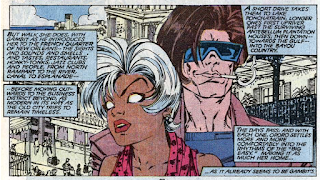 This marks Nanny and the Orphan Maker's final appearance for awhile; they'll next pop up in early issues of Generation X.

The corner cover box is updated to reflect the heads of three different factions of X-Men at this point (Wolverine/Psylocke/Jubilee, Forge & Banshee, and Storm & Gambit), the group that will comprise the re-structured team coming out of "X-Tinction Agenda".

Creator Central
Whilce Portacio, who will take over penciling duties on Uncanny after Lee leaves to launch adjectiveless X-Men, provides the cover to this issue, with Lee inking it. Inside, Portacio inks Lee, along with Lee's longtime collaborator Scott Williams (who will stick around as Lee's regular inker on the series), with the trio credited as Homage Studios (which is the name they'll take to Image Comics, as well).

The Chronology Corner
Gambit and Storm next appear in X-Men Annual #14, where they are considered to join and rejoin the X-Men, respectively, before returning to the series proper in issue #270.

A Work in Progress
The Shadow King's Hounds, as drawn by Lee, are significantly more savage in demeanor than in the previous issue. 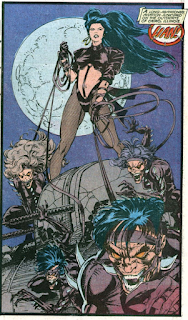 Storm remembers being attacked as a child on her way to Kenya, a detail of her past that I don't believe had been previously established. 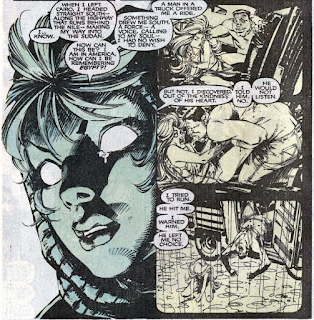 Claremontisms
Storm throws a knife with a "speed that defies description". 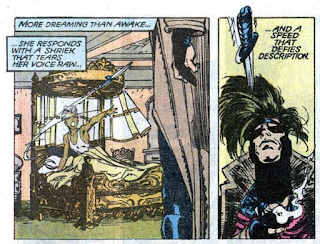 The Best There is, Mon Ami
A splash page in this issue features an image of Gambit using his power that becomes fairly iconic, and gets picked up for use in licensing/merchandise material. 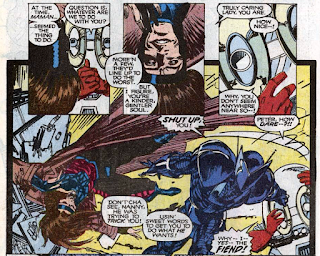 Teebore's Take
Our long artistic nightmare is finally over. After five months of rotating, middling artists, Jim Lee's run begins here, a run which will see the book's already huge popularity skyrocket, leading to the creation of a second X-Men book, and come to define this era of the X-Men, long after both Claremont and Lee himself have left the series. Regardless of your opinion on his work, there's no denying that the arrival of Jim Lee brings a jolt of much needed consistency and energy to the series, and it's certainly possible that, though Lee was already a popular artist following his work on the Punisher and his previous X-Men fill-ins, that consistency and energy is what readers responded to initially when he came aboard: after the desert of Jaaskas and Collins and Dwyers, Lee was a refreshing gulp of water.

Significant artist debuts aside, this is something of an odd issue. Ostensibly the conclusion to the Storm/Shadow King story arc and notable for bringing to an end the amnesiac Storm subplot (though notably not the Kid Storm one), it's split more or less down the middle, with Storm and Gambit escaping the Shadow King's Hounds (rather perfunctorily) in the first half, then dealing with Nanny and Orphan Maker in the second half. Obviously, this isn't the last we'll see of the Shadow King, and Nanny's larger involvement in the story had been teased in the previous two issues (and, of course, her involvement serves as the vehicle to get Storm back to normal, mind-wise, at least). But given how much Shadow King was built up as the direct, immediate antagonist in the first two chapters of the story, it seems strange that he's not present for the conclusion of the arc, abruptly returned to the back-burner just pages before the story that moved his long-simmering subplot to the foreground concludes.

Next Issue
Tomorrow, Cable battles Wolverine in New Mutants #93. Friday, the conclusion to the Ravens storyline in X-Factor #58. Next week, Alpha Flight #87-90.