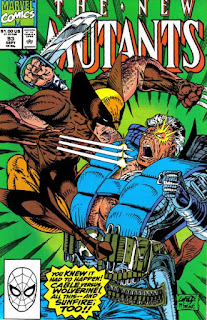 In a Nutshell
Cable and the New Mutants encounter Wolverine in Madripoor. 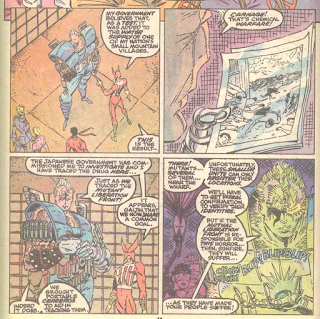 The aerial team of Cannoball, Boom-Boom, Warlock and Sunfire encounter MLF members Kamikaze, Sumo and Dragoness, but are defeated by a paralysis beam fired by Stryfe, who confirms he has Sleet, and plans to release it into the water supply of numerous major cities, leading humanity to fear and serve mutants. Meanwhile, Cable, Rictor, Wolfsbane and Sunspot follow Cerebro to a nearby warehouse, where they spot a figure moving through the shadows. Hoping to take him out quickly and quietly, Cable attacks, only to discover the shadowy figure is Wolverine. Sunspot tries to stop them, but when Wolverine and Cable recognize each other, they attack.

Firsts and Other Notables
Wolverine guest stars in this issue, popping up in the last pages to briefly battle Cable (they will have a larger fight next issue), representing the first encounter between the two characters, publication-wise, which, at the time, was a BIG DEAL. They, of course, both know one another already and have a shared, mysterious past together. 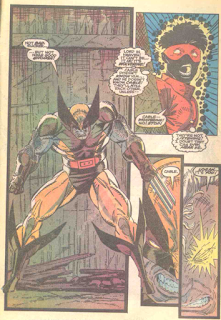 In addition to Wolverine, this issue also guest stars Sunfire, whom we last saw in Uncanny X-Men #181. 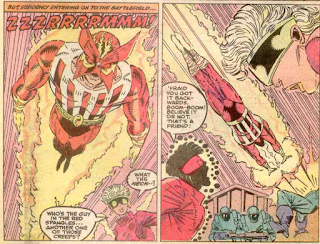 The setting of this story is Madripoor, the most common setting for much of Wolverine's solo series, and Wolverine recurring character General Coy, former New Mutants Karma's criminal uncle, pops up in this issue, having allied with Stryfe.

This issue represents the New Mutants' first encounter with Stryfe and agents of the Mutant Liberation Front. 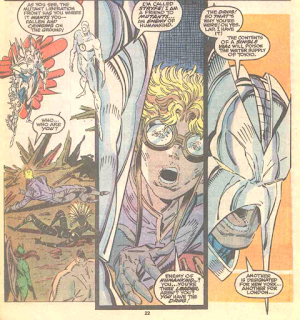 Other than Stryfe and Zero, however, no other existing members of the MLF appear in this issue; instead, we're introduced to three new Asian-themed members of the group: Kamikaze (blows stuff up), Sumo (Asian Blob), and Dragoness (energy blasts and flight via dragon-like wings). Of the three, Dragoness will make the most lasting impact on the series, though even then just barely. 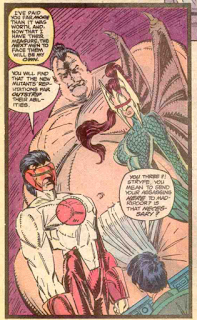 Cable is shown to be familiar with Sunfire's diplomat father, another in the category of vague hints about Cable's past meant to make him mysterious. More significantly, Sunfire mentions Cable's son, to the shock of Cannonball. It will eventually be confirmed that Cable does indeed have a son, Tyler, but while his fate (as far as Cable is concerned at this point in time) isn't exactly great, it doesn't quite fit the ominous comment Sunfire makes here, and it makes very little sense that Sunfire would know anything about Cable's family. So even though this is technically the first mention of Tyler/Genesis, it's really just more of the "throw out vague mysteries and see what sticks" approach to Cable.

A Work in Progress
Rictor's look has changed between issues: his mohawk has filled in, and now he sports a mullet. He's also wearing a green and white unitard in lieu of his "I'm not wearing a uniform!" leather-vest-over -his-bare-chest apparel. 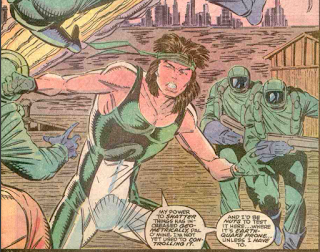 His also references his recent increase in power, which came about during his confrontation with Sabretooth in issue #91.

Cable, meanwhile, is once again sporting an approximation of his introductory costume, while Boom-Boom is wearing a more functional pantsuit uniform rather than the minidress one she sported in issues #90-91. 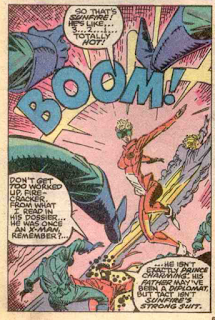 Roberto asks Rictor if his beef with Cable is going to be a problem, keeping the Rictor/Cable conflict in readers' minds.

Sam's leadership skills are shown to be improving. 501 Genes
I honestly have no idea what's happening in this panel, or what Rictor and Sunfire's relationship in space to each other is supposed to be. 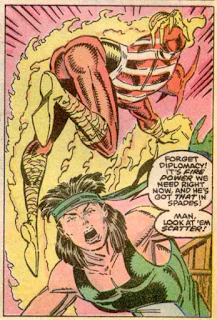 It's not clear where Stryfe is supposed to be standing in this panel; he's either in some kind of pocket dimension in which everything is white and formless, or Liefeld got tired of drawing rubble and gave up halfway through the panel.

Young Love
Roberto questions Rahne about her feeling for Rictor, and Rahne says she could never have romantic feelings for Roberto or Sam, since they're like brothers to her, even though her crush on Sam was a significant element of Gosamyr's introductory story.

Teebore's Take
At the time of publication and throughout the speculator boom of the early 90s, this issue was notable and highly sought after for depicting the first on-panel encounter between Cable and Wolverine, the character whose popularity, in part, inspired the creation of Cable. Wolverine guest appearances at the time were already big sellers; pair him with one of the hottest new characters drawn by one of the most popular new artists, and you've got a perfect storm of early 90s success.

In hindsight, now that a lot of the buzz and speculator fervor has died down, this issue and the two-part story it kicks off is notable for another reason: it's essentially the only story of the Cable-led, Liefeld-drawn New Mutants that is about nothing more than showing the new team in action, facing off against the newly created villains devised to be their new regular antagonists. All the issues prior to this (excluding #92's fill-in) were about introducing Cable, getting him to meet up with the New Mutants, and establishing their new status quo. The issues following this story are part of the larger "X-Tinction Agenda" crossover, and after that, it's all about wrapping up the series and setting up X-Force.

As a result, this story stands as really the only example of what a straightforward New Mutants story involving Cable and drawn by Liefeld, one not concerned with any business other than telling an entertaining story would look like. Putting aside any questions of how well it succeeds in that goal, looking back now, that alone makes this story far more noteworthy than the Wolverine guest appearance which caused all the buzz back in the day.

Next Issue
Tomorrow, X-Factor battles the Ravens in X-Factor #58. Next week, Alpha Flight #87-90.