Game of Thrones 5x02: The House of Black and White 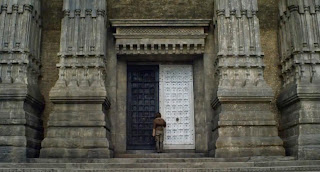 Braavos
Everyone's favorite little girl with murderous intentions is entering Braavos between a man's legs. Well, it's actually a giant statue's legs. Either way, I hope Arya doesn't look up!

Thanks to her magic coin, Arya is being ferried to The House of Obvious Symbolism. (OK, it's the titular House of the Black of White.) She knocks the appropriately two-toned door and is greeted by a creepy looking man (and by “greeted” I mean silently glowered at). Arya asks for Jaqen H'ghar but there is apparently nobody there by that name.

After a rainy night of naming off the people she wants to kill Arya decides to ditch the coin and slaughter pigeons. Whatever passes the time, I suppose. So, some random thugs decide they want Arya's tasty pigeon corpse but Arya wants them to taste her sword instead. Before she needles them to death the creepy looking man appears and scares the thugs off with a glower.

To the surprise of no one, the creepy man turns out to be Jaqen although he refuses to call himself by that name. Apparently, to enter The House of Black and White you must have no name. Arya follows the assassin formerly known as Jaqen into the House of the Black and White via the black door.

The Eyrie
Brienne is eating at a inn with the only man born with his own walking stick, Podrick. Podrick spots Sansa and Petyr Baelish eating at different table. Despite Podrick's apprehension, Briene confronts Littlefinger in an attempt to save Sansa from the creep incarnate.

Brienne swears complete loyalty to Sansa but Sansa doesn't buy it since Brienne had bowed before Joffrey once. Brienne says we all do things we don't to do but Sansa, lacking all self-awareness, says we have choices in what we do. So Brienne tries to leave but Baelish tries to have her killed. (I wonder what Sansa thinks of that?)

A chase through the woods ends with Baelish's soldiers getting Brienne-ed. Brienne then vows to follow Sansa and protect her from Petyr. Podrick agrees to go with her because what else is he going to do? Besides, he needs an extra pair of hands to help lug his own Petyr around because his finger sure ain't little.

On The Road
Tyrion and Varys are in a carriage reminiscing about Tyrion's time as Hand of the King. Tyrion is bored and wants to stretch his legs but Varys won't let him go out because it's too dangerous. Tyrion is like, there's a lot of dwarves in the world, it's not like Cersei is going to kill all of them, right?

King's Landing
The answer is, YES! But we'll get to that in a moment.

Cersei and Jaime are looking at a threat from Dorne in the form of a viper statue with Cercei's daughter Myrcella's necklace in its mouth. Cersei seemed quite pleased with The Mountain squishing Oberyn's head. Perhaps she should have seen this coming?

So, Jaime decides that he'll go to Dorne and do...something. But that something can't be done alone. So Jaime seeks out Bronn, messes up his wedding plans (as well as his plan to murder his future-sister-in-law) because he wants Bronn to help him out in Dorne. Bronn agrees to go at the promise of greater reward. Let the zany, buddy cop hijinks commence!

Meanwhile, Cersei is examining a dwarf's head. It's not THE dwarf's head so she's upset. But she doesn't punish anyone because she wouldn't want to discourage the wonton slaughter of dwarves. One of the dwarves slaughtered could end up being Tyrion!

Cersei then holds a council in which she claims to be taking the place of the king until King Tommen is of age to rule. Most people are OK with it including newcomer(?) and all around creepy guy Qyburn who is now the Master of Whispers. Cersei's uncle Kevan Lannister, however, is not impressed by Cersei. I'm not sure if he's sexist or just recognizes Cersei as an awful person but he says he'll be at Casterly Rock until the king personally calls for him.

Dorne
Ellaria Sand is still hella pissed about Oberyn's death. Prince Doran Martell isn't sure what all the hubbub is about. Oberyn died in a perfectly legal trial by combat. Ellaria says the people of Dorne won't stand for inaction. Prince Doran is then thankful that the people aren't the rulers of Dorne.

The Wall
Shireen Baratheon is teaching Gilly to read. Cute! Shireen's mother lectures Shireen on what dirty mongrels the wildlings are. Not Cute.

In an effort to calm the people of the north, Stannis offers Jon Snow a chance to become Jon Stark and rule Winterfell. Jon Snow likes the idea but says he'll turn it down because of course he will. He's Jon Snow.

It's voting time for Lord Commander of the Night's Watch. Denys Mallister, commander of the Shadow Tower, and Ser Alliser both want the job. Sam points out that when the going got tough Janos got going into a basement with the women and children. He also points out the when Ser Alliser got injured it was Jon Snow who took charge and, through command of the Night's Watch, successfully defended the Wall.

The votes are in and it's a tie! It's up to Maester Aemon to cast the final vote and Jon Snow wins! I'm sure that won't have any negative repercussions for Mr. Snow.

Meereen
Daario helps capture a Son of the Harpy. Ex-slave Mossador wants the guy executed. Ser Barristan wants a fair trial. Daenerys nearly sides with Mossador. However, Barristan tells Daenerys that her father being called the mad king was not a misnomer. When a ruler blindly doles out justice on a whim without thought or recognition of any personal flaws or biases, well, a lot destruction could be had.

Daenerys then decides a fair trial is in order but Mossador has no patience for a trial and kills the Son of the Harpy member himself. Mossador tells Daenerys he did it for her but she tells him that she must abide the law and the law says murders are put to death. So we get our second execution in as many episodes.

The people of Meereen (specifically the ex-slaves) are NOT happy with Daenerys. Riots soon erupt and Daenerys is learning that ruling isn't as easy at it seems. Just then, her lost dragon Drogon shows up and I think Daenerys believes that ruling might be a bit easier if her dragons were around.

Other Thoughts
So both Jon Snow and Arya Stark seem to be on a prototypical "hero's journey." To risk oversimplification, Arya on the Batman path while Jon is on the Superman path. This makes me very wary of what's in store for them considering George R.R. Martin is involved.

When Arya was listing off the names of people she wanted to kill, I couldn't make out who the fourth person was and couldn't remember who else had wronged her.

I get that Arya was feeling down, but that coin seemed valuable. It didn't seem wise to throw it away.

I try to be sympathetic towards Sansa but her dismissal of Brienne doesn't help with that. So what if she bowed to Joffrey? I didn't see Sansa openly opposing Joffrey.

I figured that Bronn's story was over and that he'd be a non-factor going forward. I don't mind being wrong but, despite being fun to watch sometimes, he really is an odious human being.

Myrcella Lannister seems to have grown up really fast.

I get that Trystane thinks Oberyn's death was honorable/legal but the Mountain also admitted to raping and squishing the head of his sister...

I wonder how well Daenerys's voice travels during her big speeches.

So, how will the rioting affect Daenerys? Will it encourage her to explore diplomacy more or make her resort to martial law?

No updates to the counts this episode unless you count Mossador as a main character...which I don't.

Brienne: Do you think she's safe with Littlefinger?
Podrick: No m'lady.
Brienne: Get your horse.

Tyrion: When I agreed to come with you did I misrepresent my intentions?