The Walking Dead 5x05: Self Help 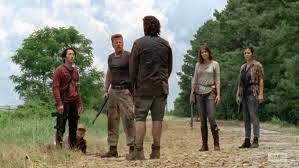 So, Eugene let the cat out of the bag. I can’t say that I’m surprised. I doubt other viewers were either. This is The Walking Dead after all. Somebody providing any sort of tangible hope was too good to last.

I had already read this revelation in the comics but even I was hoping-against-hope that this iteration of Eugene was actually telling the truth. (Although, I’m sure if he was he’d end up getting devoured by zombies just as he’s about to complete the zombie cure.) I have no idea how those who don’t read the comics felt about this. Was it at all surprising and/or did they feel jerked around?

Anyway, aside from the revelation at the end this episode there wasn't much going on. We did have a bit of characterization (especially regarding Abraham's past) and, while appreciated, it wasn’t enough to fill out the rest of the episode. This is second episode in a row that has dragged and I think the problem is two-fold.

Firstly, they have, once again, split the group up. The producers seem to think that focusing entire episodes on just one part of the group is the way to go. However, they’re not giving these isolated stories enough content for an entire episode. They need to pick up the pace. What if they combined last week's episode with this one? We’d end up with a faster pace, more exciting show instead of feeling like we're back in season 2.

I think this issue will resolve itself. My hunch is that sooner rather than later the group is going to reform. Probably by the midseason finale at the latest.

The second problem is when they’re doing one of these quieter episodes they think all they need to do to “spice things up” is bring on a zombie attack. We’ve seen zombie attacks. Many of times. The group has warded off so many zombies so many times that almost all tension is lost.

The Walking Dead tries to do different things with zombies like last episode’s shots in the dark and this episode’s zombies drinking from the fire hose. But those unique variations only add so much. In the end, it’s getting harder and harder to feel any excitement when a random door opens up and zombies start shuffling through.

This second issue is a bigger problem. The Walking Dead is built on one thing, zombies. So what happens when zombies become uninteresting?

I suppose you could make humans the enemy. But how many more variations of that can they do? They could explore the idea of a benevolent human community banding together to help each other out and fortify themselves against the zombie hordes. But that wouldn’t be portraying humans in an anarchy as amoral, selfish monsters would it?

The Walking Dead could focus on characters and interpersonal drama. My first reaction to that is “boring!” But it doesn’t have to be. It’s all in the execution. Of course, character development has never been The Walking Dead’s strong suit. Perhaps that’s the root of this problem. The Walking Dead has a lack of characters that I connect with.

To be fair, The Walking Dead is trying to do more character development but I think their cast has become too large. There’s not enough time to focus on everyone. I don’t think this had to be a problem but the fact is The Walking Dead basically ignored character development when the group was smaller in the first few seasons. Now the group is growing. They’re trying to get us to care about new characters even though we still barely care about the old ones. Make sure your foundation is stable before worrying about the windows and roof.

So, I don’t know what the solution is. They could pare down the group. Or hope bigger zombie hordes leads to more excitement. Maybe they could create super zombies? I’m not sure what’s needed but I feel like something has to happen to inject some excitement back into this series.

Other Thoughts:
As an example of my lack of connection with these characters; this episode prompted me to look up if Maggie is pregnant or not. She is not.

A part of me thought it would be funny if everyone in the bus was just dead after it crashed. Maybe I have a morbid sense of humor.

I knew Eugene wasn’t capable of handling himself but I didn’t realize he was an out-and-out coward.

It was odd that Tara tells Eugene to not sabotage the mission again but never thinks to ask why he’s sabotaging the mission in the first place.

If a door opens without the characters noticing then you know zombies are shuffling out.

It’s a good thing the zombies didn’t start moaning until after they exited the door.

Eugene really did deserve to get punched. If I was one of them I would’ve tried to get between Abraham and Eugene and the tell Abraham he only gets one punch, so make it count.

So Abraham is once again a soldier without a mission. I would say I feel sorry him because he’s got nothing now but, to look at the glass as half full, he’s still knocking dem boots which is better than most people in the zombie apocalypse.

In case you’re wondering, according to The Talking Dead (and the comic) the men Abraham killed in his flashback were people a part of a group Abraham was with. They ended up…doing nefarious things…to Abraham’s wife while he was away.

Also, on The Talking Dead, you get to hear Chris Hardwick say things like, “Part of what’s fun about this show is that every character has to do terrible things.” I’ve...got nothing to add to that...
Newer Post Older Post Home
Posted by Dr. Bitz at 1:27 AM