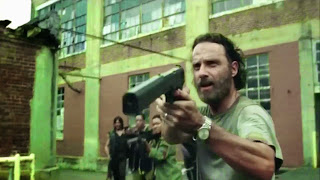 Is season five the best season of The Walking Dead so far? I've heard speculation saying people think that it is. Frankly, I might be inclined to agree. At the same time, you could argue that (despite the incredible popularity of The Walking Dead) that's damning the show with faint praise.

The reason I bring up the quality of this season is that this episode was pretty good. I wouldn't call it excellent though. The Walking Dead has hit this sweet spot of being good enough to not rag on but not being so excellent that I feel the need to heap praise atop of it.

I suppose another way to put it is: I have no idea what to write about.

This was the penultimate episode of the midseason (which, these days, is basically its own season). So this episode was all about getting the pieces in place for the big showdown between Rick's group and the hospital. Well, that and checking in on the Abraham faction who may or may not play a part in said show down.

An episode checking in all splinters of Rick's group was a welcome departure to the singularly focused episodes we've been getting recently. We were able to get quieter character moments with the Father Gabriel plot and the Abraham parts (can you imagine an entire episode devoted to Abraham being semi-comatose and waiting to see if Eugene wakes up?) but got more action with Rick and company plotting a hostage exchange to get Beth and Carol back and then capturing the hostages. There was even a suitably tense moment as Daryl nearly got bit but (probably improbably) did not.

Normally, when all else fails, I try to discuss the central theme of an episode. But, honestly, I can't find it. Maybe you did? Did anyone figure out the single thread sewn through all these disparate stories? This episode seemed more about straightforward plot than thematic resonance. That's not necessarily a bad thing but it did make this episode feel more utilitarian.

All in all, though, I enjoyed this episode. I rarely got bored and didn't roll my eyes. The big issue I had was that I knew I was going to review this episode and couldn't find any real angle to write about.

Other Thoughts:
Did Rick's group even ask Father Abraham if they could tear up his church?

Speaking of tearing up the church, what exactly was their goal? Building a zombie fence?

I was looking at GREATM and tried to think what the woman's name is who starts with R. Which probably tells you how impactful a character she has been so far.

It's Rosita, by the way.

I think after like more than 5 minutes of unconsciousness serious brain damage is likely to have occurred. So, I'm not sure how good Eugene will be doing now.

Tyreese's plan vs. Rick's plan was pretty much the pacifist vs. aggressor. Shockingly, they went for pacifist's plan. But will that work out for them? There's already complications...

You'd think I'd be on Tyreese's side and I kind of am but, at the same time, while Rick's plan means more death it also means the hospital group is no longer around to prey on other people.

The hospital group seems overly concerned with getting Noah back. I guess they're assuming he's going to try and cause problems for them? Which he already is, I guess.

Maybe before Glenn and Tara crack jokes about DC they should remember that it was a red herring for them for, like, a few weeks while for Rosita it was at least months. (And people she knew probably died in the name of that red herring.)

So Office Dawn now likes Beth because she has proven her strength? I think Dawn might actually be Apocalypse.

If I was Beth I wouldn't trust the doctor's suggested medical treatment. Then again, what other choice does she have?

I feel like Rick's group should've surrounded the cops when they lured them into the trap.

I also call BS on the whole "one officer can tell another person is an officer after a minute of interaction."

I was confused why the group didn't immediately start killing the melted zombies. It just seemed dangerous to keep them around and it wouldn't be much effort to kill them.

Am I the only one who feels the sexual tension between Michonne and Father Gabriel?

Shouldn't stepping on a nail as you try to leave somewhere be seen, by a priest, as a sign from God?

The hostages seemed to think Officer Dawn wouldn't exchange Beth for them. Even if they aren't Officer Dawn's favorite, is Beth worth all three of them?

I like how Sasha agreed to kill one of the melted zombies. Why not all of them, just for good measure? Then again, maybe she shouldn't have tried to kill any seeing as how it turned out.
Newer Post Older Post Home
Posted by Dr. Bitz at 11:01 AM