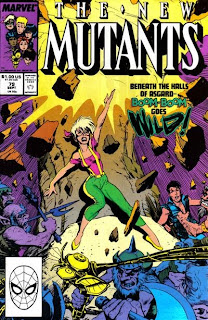 In a Nutshell
The New Mutants reunite with their Dwarf friends.

Plot
Now in Asgard, Rahne transforms into a wolf, hoping to telepathically establish communication with Dani, but the evil entity in control of Dani's body attacks her. Watching from Hel, Hela is angry to see Dani in Asgard, as she was supposed to deliver the souls of Earth's greatest heroes to her, but she consoles herself with the knowledge that at least she can still acquire the souls of the New Mutants. As Dani flies off, the New Mutants discover that Rahne is still alive, which she believes is an indication that Dani still has some control over her actions. As the New Mutants debate their next move, they discover an army of dwarfs marching on the nearby castle. The dwarfs attack the New Mutants, but once Sam hears they're led by his old friend Eitri, he orders them to stand down and allows themselves to be taken prisoner. 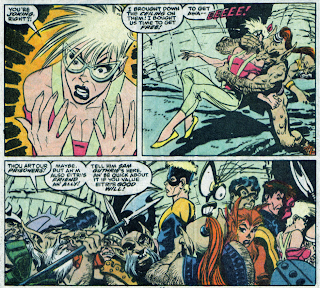 Meanwhile, Hela observes the dwarf advance, and orders the transformed Valkyrie to defend their castle from the dwarfs and New Mutants. Beneath the castle, the New Mutants bristle at being imprisoned, and Sam worries that he made the right call trusting Eitri. But Eitri eventually opens the cell door, embracing his old friend and welcoming the New Mutants into the dwarf army. Over dinner, Eitri tells them of how the Valkyrie have changed, and now raid the living, including a number of the dwarfs' best weapon smiths. Having complained to Odin but received no response, they've taken it upon themselves to attack the Valkyrie and win back their forgers. Just then, three of the demonic Valkyrie suddenly appear, declaring that both the dwarfs and the New Mutants will soon join them in Hel.

Firsts and Other Notables
Brett Blevins is back on pencils, having been away for the last four issues. This will be Blevins' last New Mutants story, as, after one more fill-in in the middle of the story, he'll eventually give way to new regular artist Rob Liefeld (leaving the last two issues of this story to fill-in pencillers).

With Blevins return, so to does his default depiction of angst: a character looking to the sky while holding their hands, fingers clenched, in front of their face.

A Work in Progress
On Asgard, Dani's physical form has transformed to reflect the demon possessing her. We also learn that Hela intended for Dani to remain on Earth, in order to kill people there, including superheroes, to swell her army of the dead. 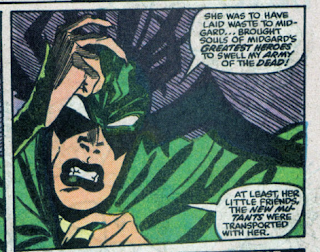 Sam spends this issue grappling with being solely responsible for the New Mutants now, with his co-leader thoroughly compromised. 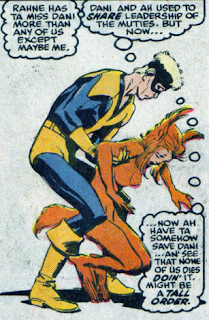 Boom-Boom takes an immediate dislike to Asgard, while Roberto is happy to be back in the land where he's stronger than ever and heroes are, by his measure, treated properly.

For a change, we're reminded that Rahne is strong but not invulnerable in her wolf form. 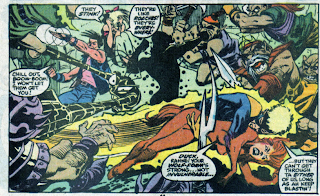 Rictor mentions having been in jail with his father when he was younger. 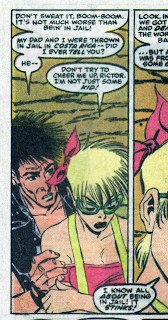 He then references X-Factor #22, in which Boom-Boom saved him from the Right and prevented him from killing himself, saying it was a turning point in his life and that he wants to help Boom-Boom in a similar manner. 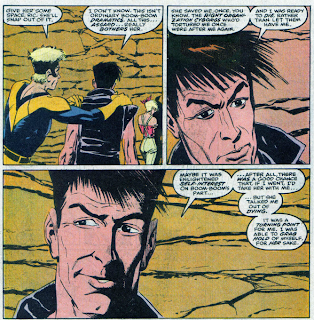 It's revealed that the corrupted Valkyrie, working for Hela, are attacking the living, not just claiming the dead, something the Dwarfs tried to tell Odin, but he's apparently too busy since Asgard came to the Negative Zone to do anything about it. 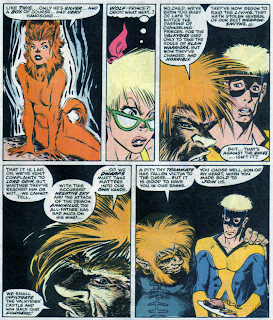 It's in the Mail
Letters react to issue #75, with at least one letter pointing out all the things wrong with Magneto's "I was evil all along!" explanations (ie he reluctantly held back while the X-Men fought the Marauders, he was resistant to the idea of an alliance with the Hellfire Club, etc.).

Teebore's Take
The New Mutants are in Asgard! While this story is rightly criticized for dragging on way too long by the end, it's not entirely without its charms, chief among them that it's clearly designed to be a direct sequel to the New Mutants' first Asgardian adventure from Special Edition #1 & X-Men Annual #9, which is certainly a story worth a return visit, featuring many of the characters introduced there and referencing the relationships established in that story. Thanks to the relatively new presence of Boom-Boom and Rictor on the team, Simonson is able to re-introduce some of those elements in a  less exposition-y manner, with Sam telling them about his friendship with Eitri or Bobby showing off his increased Asgardian strength.

Simonson also does an effective job of getting inside each of the characters' heads as the story begins, making clear the stakes for each of them, further illustrating their characterization in the process. Rahne is, of course, mostly worried about Dani, but also curious about her Wolf Prince from the last time she was in Asgard, Sam is angsting over whether he's making the right decisions his first time out as solo leader of the team, Warlock is worried about losing or saying goodbye to yet another friend, Boom-Boom, the character most "of her time", finds the whole fantasy setting gross and unsettling, while Rictor is dedicated to easing her transition into this new world. And Bobby, being Bobby, is, for the moment, just happy to be back in the land of increased strength and traditional heroic values. In the end, this story may ultimately become a chore to get through, but the beginning is enjoyable enough.

Next Issue
Tomorrow, X-Factor is scattered on an alien world in X-Factor #44. Next week, Uncanny X-Men #249 and Excalibur #12.
Newer Post Older Post Home
Posted by Austin Gorton at 12:00 PM