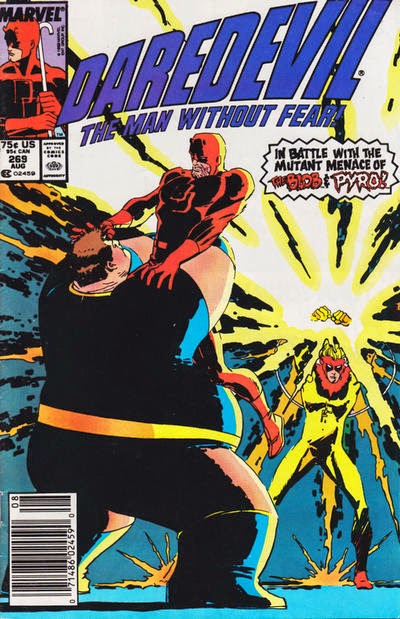 Plot
Blob and Pyro of Freedom Force, tasked with bringing in an unregistered mutant, arrive in a small town, teleported there by Spiral. They find the residents of the town less than welcoming, but their mutant powers and federal authority give them the run of the place. Meanwhile, Matt Murdock arrives in town and, feeling that the Mutant Registration Act is a violation of civil rights, decides to find the mutant before Freedom Force can. After getting Blob and Pyro drunk, he overhears one of the locals selling out the mutant to Pyro, and races to her location ahead of Freedom Force. As Daredevil, he gets the mutant, a young woman named Amanda, out of the bell tower where she's hiding just as Pyro attacks, but he's overwhelmed by Pyro's flames and passes out. 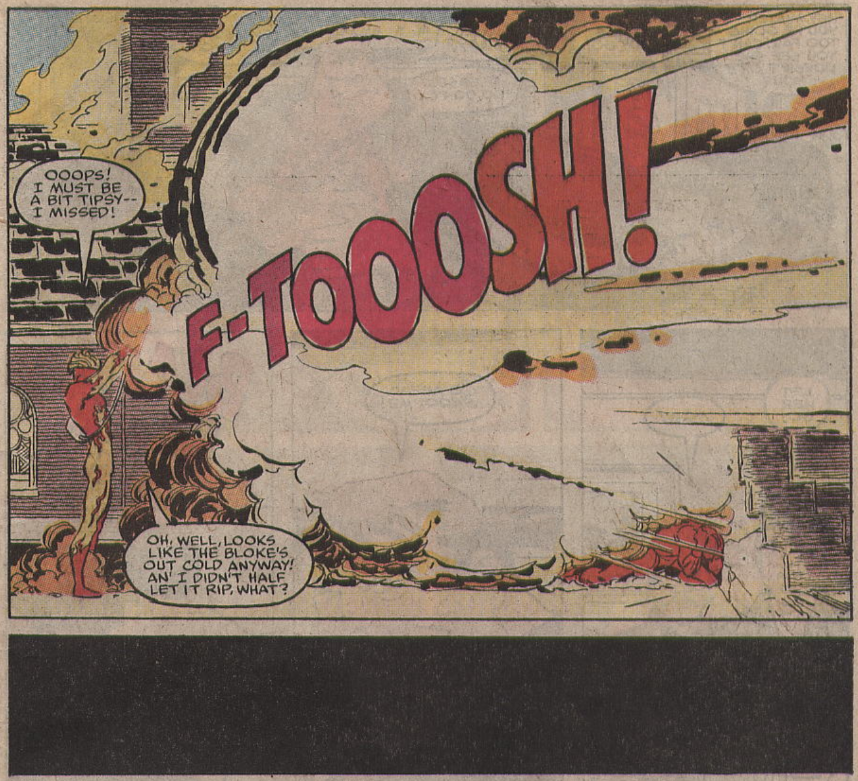 Daredevil wakes up as Blob is assaulting the female bartender, and as Murdock, plays off Blob's jealousy to turn him against Pyro. As the two mutants fight, Daredevil retrieves Amanda then confronts Pyro and Blob. Using his billy club to break Pyro's arm, he moves Blob into position so that Amanda can use her power to drop the church bell on him, knocking him out. Daredevil tells Amanda to hide, saying he has to move on as well. Later, Spiral retrieves Pyro and Blob as Amanda leaves town, feeling that everyone seems a little paler after having met Daredevil.

Firsts and Other Notables
Freedom Force, represented by Blob and Pyro, appear in this issue in order to capture a mutant who hasn't registered. Spiral also appears briefly at the beginning and end of the issue to teleport them in and out, indicating she's still a member of the team at this time. 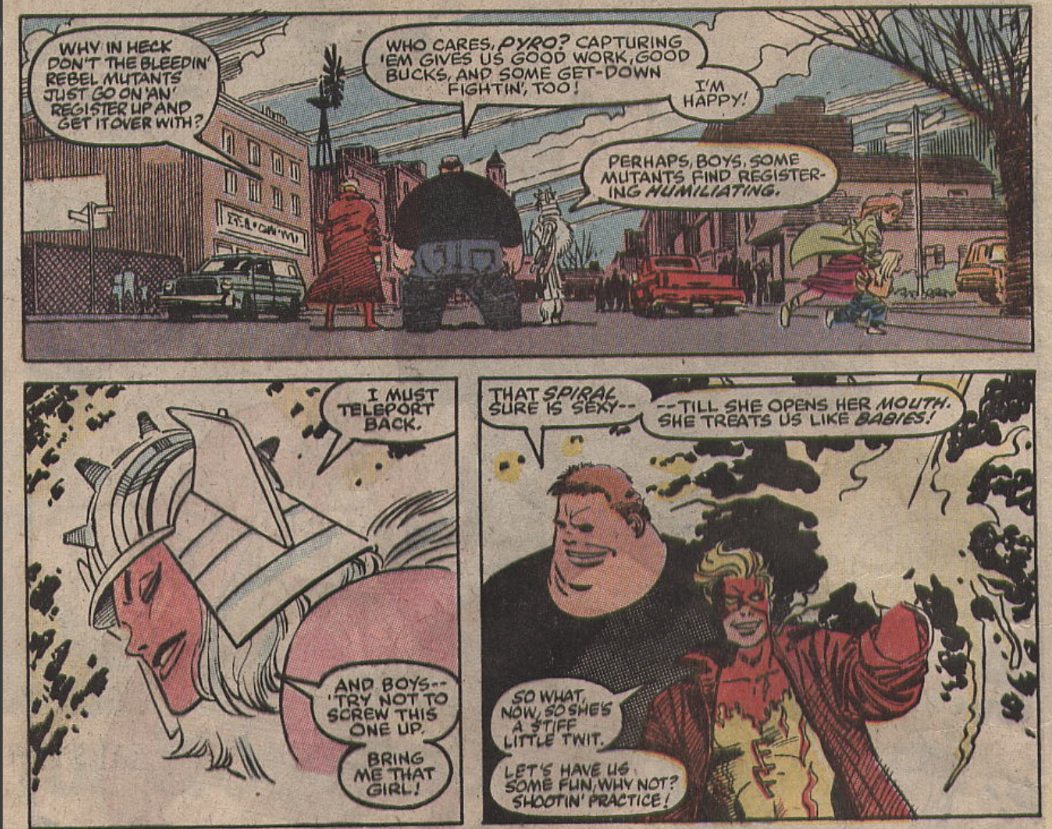 This issue falls during the long Ann Nocenti/John Romita Jr. run of Daredevil (as did the series' "Fall of the Mutants" and "Inferno" tie-in issues), and comes at a time when, in the wake of battles with Typhoid Mary and Mephisto, Daredevil has left New York City and embarked on an Incredible Hulk TV show-style wandering tour.

The Chronology Corner
The Marve Chronology Project lists Blob and Pyro's appearance in this issue as ocurring after Captain America #346, and prior to X-Factor #40 and New Mutants #78.

A Work in Progress
Arriving in town, Blob and Pyro waste no time flexing their authority. 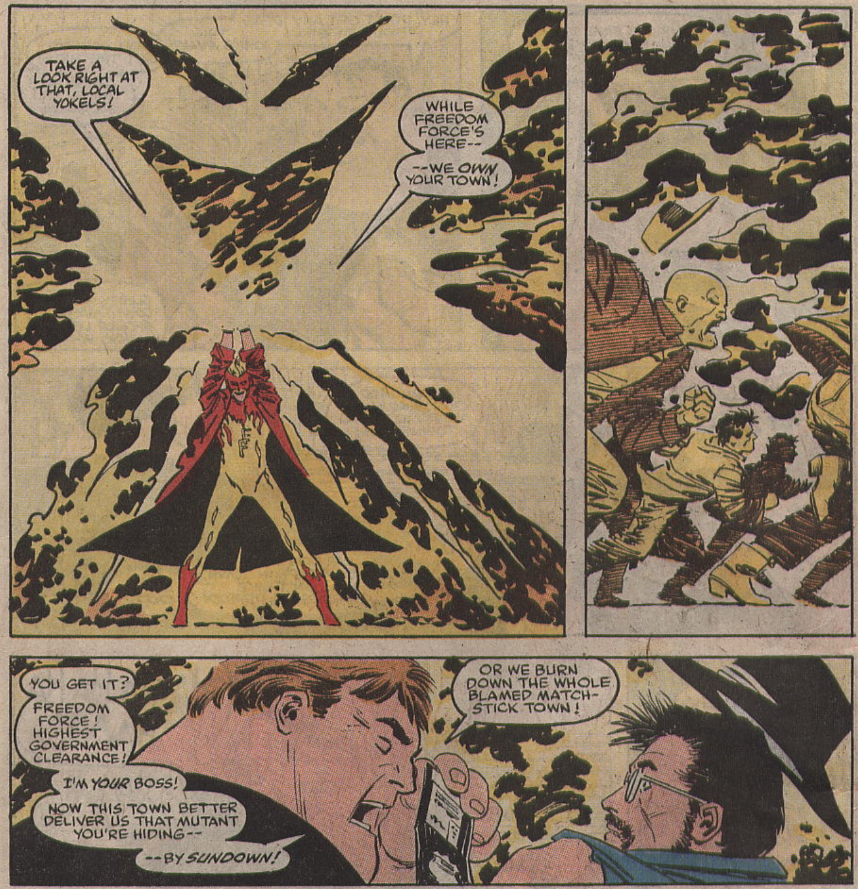 Daredevil, lawyer that he is, notes that the Mutant Registration Act is a gross violation of mutants' civil rights. 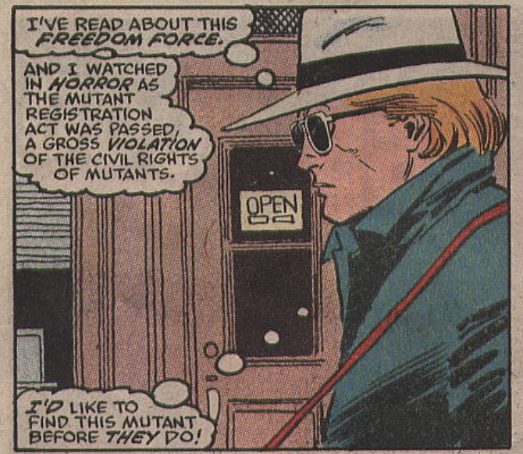 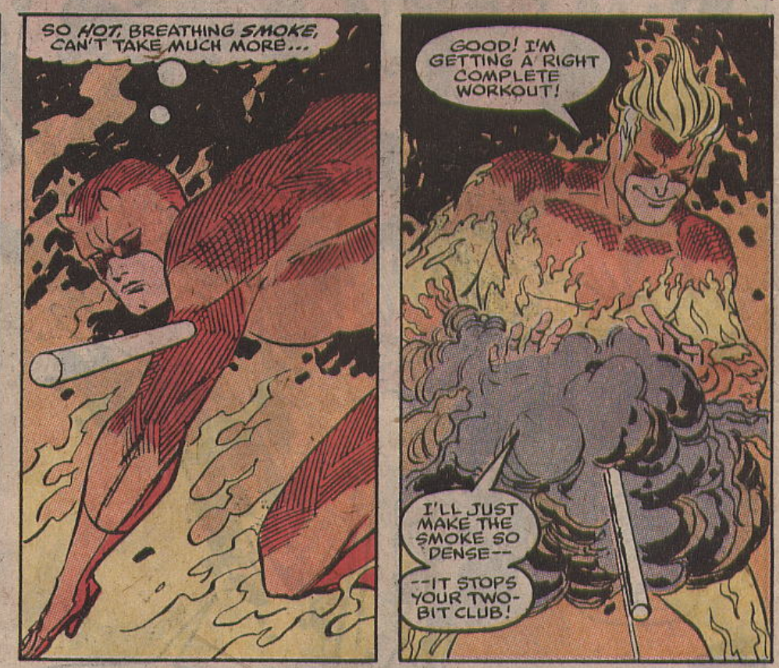 In a cute moment, both Pyro and Daredevil are shown to be thinking the same thing at the same time just prior to their rematch.

Human/Mutant Relations
Interestingly, the townspeople (with the exception of the one guy who sells her out) band together against Blob and Pyro, help guard and keep Amanda away from them. It's a refreshing change from the usual lynch mob approach to mutants in small towns.

Teebore's Take
I decided to take a look at this issue for a couple reasons. Mostly, I needed something to fill this slot, just prior to Uncanny X-Men going bi-weekly again and with most of the 1989 annuals covered, in order to keep both Excalibur and Wolverine on their regular days and still have an X-aminations post up on a Wednesday. Plus, I figured it would be fun to see Freedom Force acting as the government's mutant strike force independent of interactions with the main characters of the X-books. And, of course, it's always nice to see more John Romita Jr. art.

But this actually turned out to be a fun little done-in-one story. We get to see the Mutant Registration Act being enforced outside of an X-book, and Blob and Pyro do an effective job of reminding us that, federal agents they may be, they're still villains at heart, both in terms of the way they abuse their authority and in how they treat the women in the story (specifically, their quarry and the bartender). And while Daredevil taking on the whole team might have seemed a bit much, Pyro and Blob alone make for decent adversaries, powerful enough to be a challenge but not so powerful that Daredevil can't eventually prevail against them. By no means essential reading, this is nonetheless an entertaining and gorgeously drawn snapshot of the non-superhero side of mutant life in the Marvel Universe and a chance to see Freedom Force doing their thing independent of the various X-characters.

Next Issue
Tomorrow, the wrap up to the Nazi Excalibur story in Excalibur #11, followed by Wolverine #10. Next week, Jim Lee makes his X-Men debut in Uncanny X-Men #248.
Newer Post Older Post Home
Posted by Austin Gorton at 12:00 PM