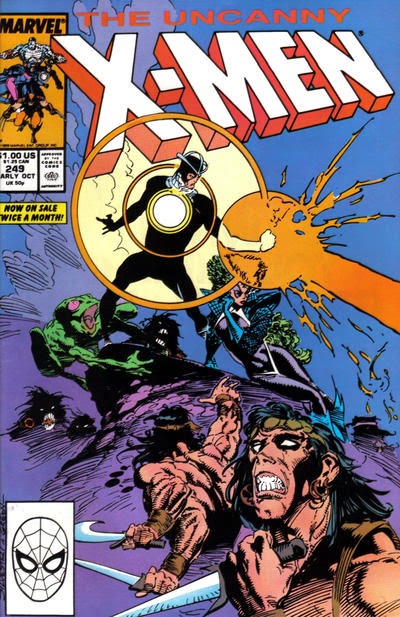 In a Nutshell
Zaladane captures Polaris

Plot
Beneath the X-Men's town, Havok watches as the computers replay the events of Storm's death and funeral. Angry, he lashes out, knocking himself unconscious just as Lorna Dane, growing increasingly more independent of Malice, calls him from Punta Arenas. When he doesn't answer, Malice taunts her, causing her to destroy the phone booth and draw the attention of a local fisherman. Back in Australia, Colossus is unknowingly stalked by a group of Reavers performing recon. Later, Havok awakens in his bedroom, someone having moved him there and left him a note about Lorna's call. Havok and Psylocke trace the call, and Havok insists that the X-Men go to help her. In Punta Arenas, the fisherman tends to Lorna's wounds at a local tavern, when suddenly a group of primitive soldiers riding dinosaurs burst in, seeking Lorna. 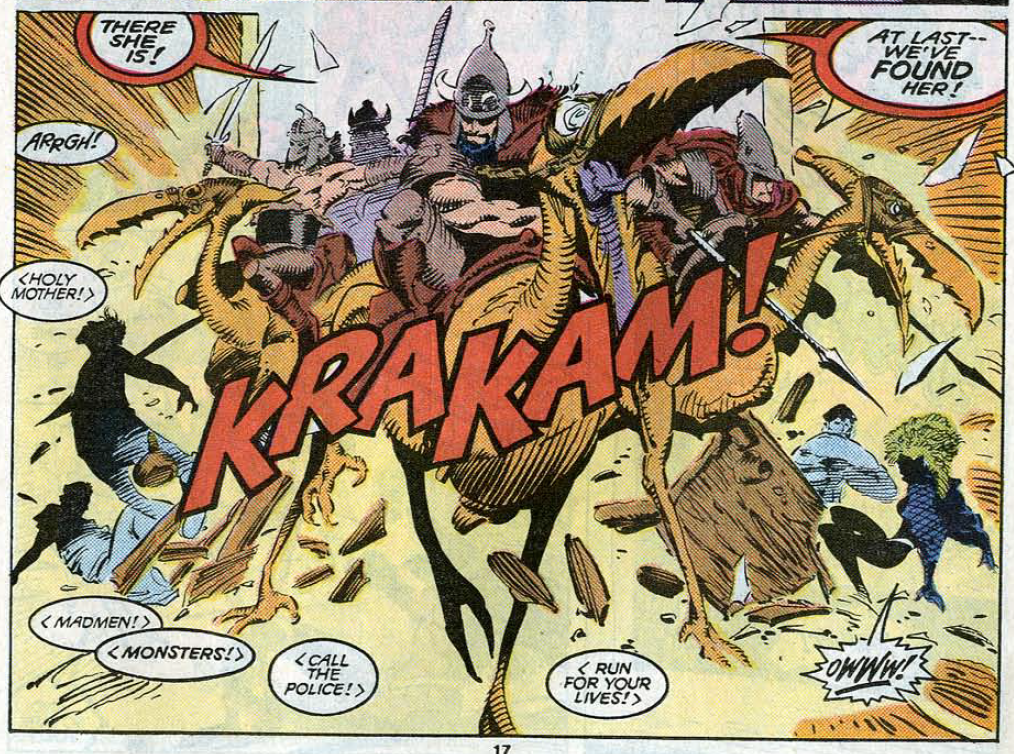 The X-Men arrive shortly thereafter and run afoul of the dinosaur riders, learning they're from the Savage Land. Just then, the Savage Land Mutates attack, and though they initially have the upper hand, the X-Men work together to beat them. As Zaladane, the leader of the Savage Land army and captor of Lorna, addresses the townspeople, Psylocke, Dazzler and Colossus interrupt with the captive mutates, claiming there are more X-Men with them. They trade the mutates for the lives of the townspeople and Zaladane's withdrawal. She leaves for the Savage Land, still in possession of Lorna, whom she believes to be her sister, a fact which surprises Havok, now disguised as a member of Zaladane's horde.

Firsts and Other Notables
Polaris reappears in this issue, growing more independent of (but not yet entirely free of) Malice in the wake of Mr. Sinister's apparent death and the dismantling of the Marauders. Starting with this issue, she'll have an increasingly large (though never quite regular) role in the series heading into the big reshuffling in '91 (when she'll join the revamped X-Factor). She calls the X-Men looking for Havok's help, though I have no idea how she got the number (or that the Outback X-Men even have a phone number...). 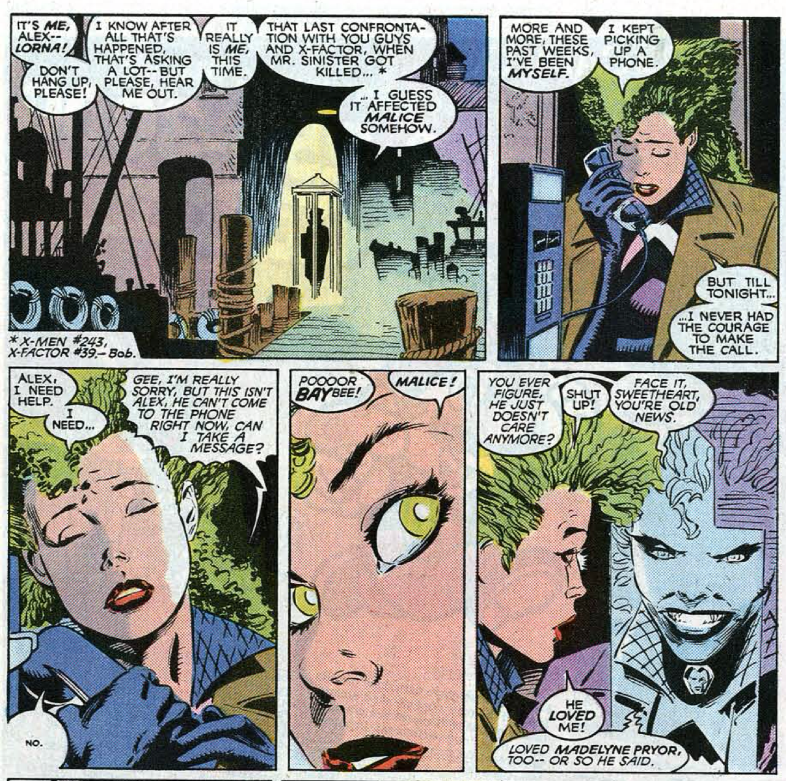 Zaladane, one-time priestess of Garrok and later assistant to the High Evolutionary, reappears, now leading the Savage Land mutates and an army of natives, claiming Polaris is her sister. At this point, I honestly have no idea if their relationship (which seems to stem simply from the fact that Polaris' last name matches the last four letters of "Zaladane") has ever been confirmed, but from this point forward Zaladane certainly believes it to be true. 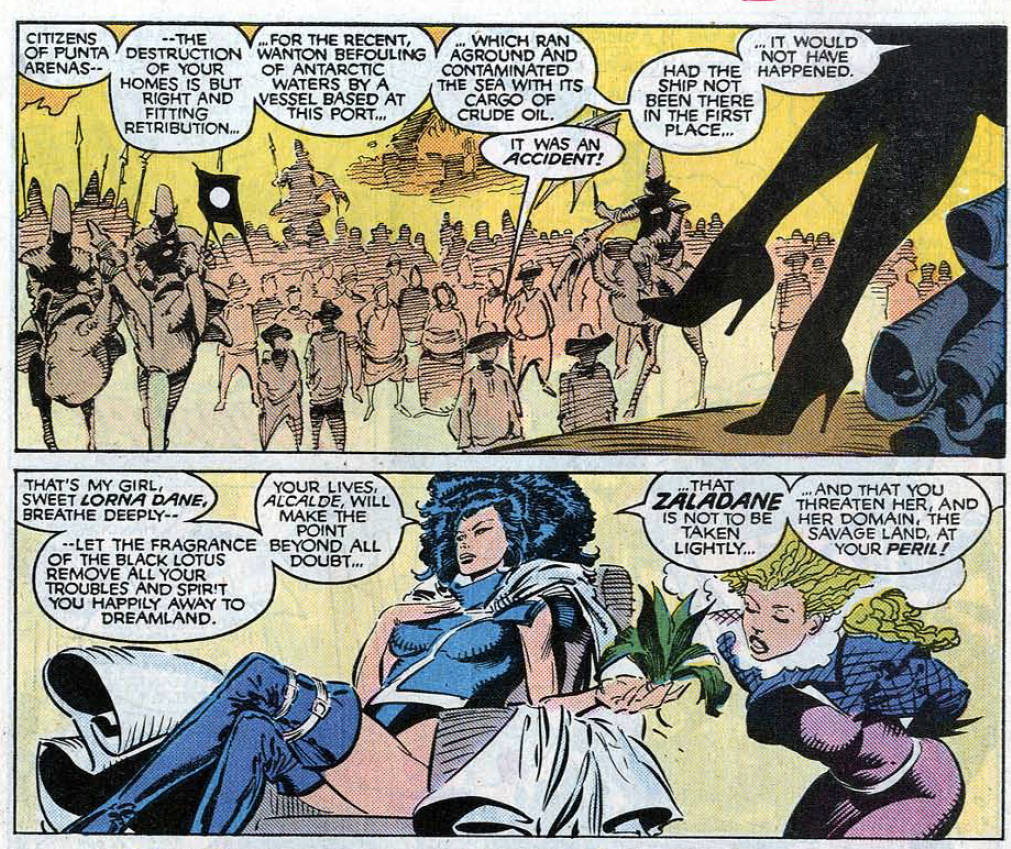 Amongst the Savage Land mutates she's leading is Whiteout, who appears here for the first time. She's basically a replacement for Vertigo, capable of creating blinding light effects (like a whiteout in a blizzard). Though considering the Mutates were initially creations of Magneto, I'm not sure how new ones come about without him down in the Savage Land mutating natives. 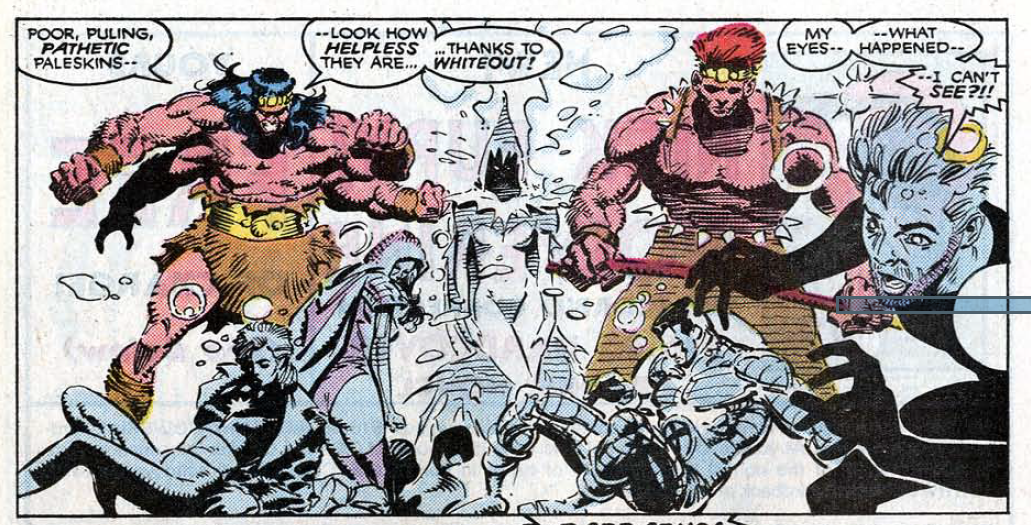 In the absence of Storm and Wolverine, Psylocke steps up and essentially becomes the team's leader this issue, a role she'll perform only through issue #251. 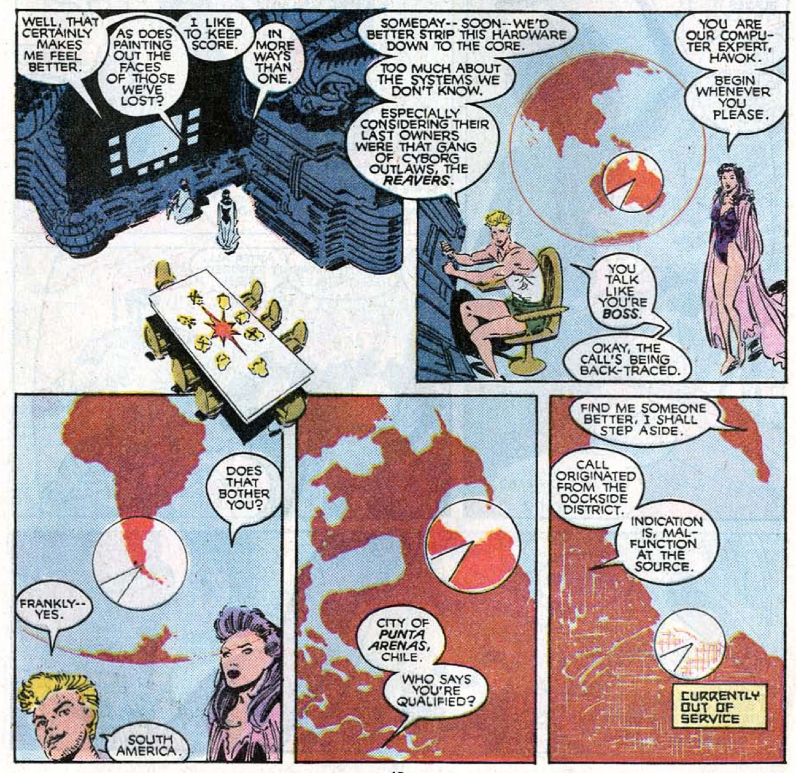 At one point, the X-Men wonder if Gateway is the person who helped Havok, musing it would be funny if he turned out to be taking care of them all along, just like Professor X used to. One of Claremont's aborted ideas for the series was to permanently kill off Professor X and position Gateway as the new mentor figure for the team.

The Chronology Corner
Between last issue and this one, the remaining X-Men appear in Wolverine #21 (which won't be on sale for roughly another six months after this issue.

A Work in Progress
Havok has taken to crossing off the missing/dead teammates from the X-Men's meeting table, a table that is said to have been made by Madelyne, but this is the first we're seeing of it (the star logo, of course, has been seen before). 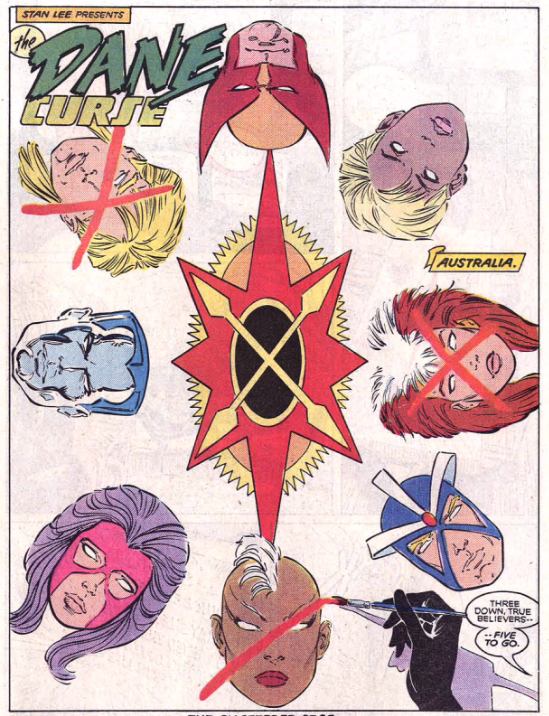 Between last issue and this one, the X-Men buried Storm, an event replayed on the computer monitors. 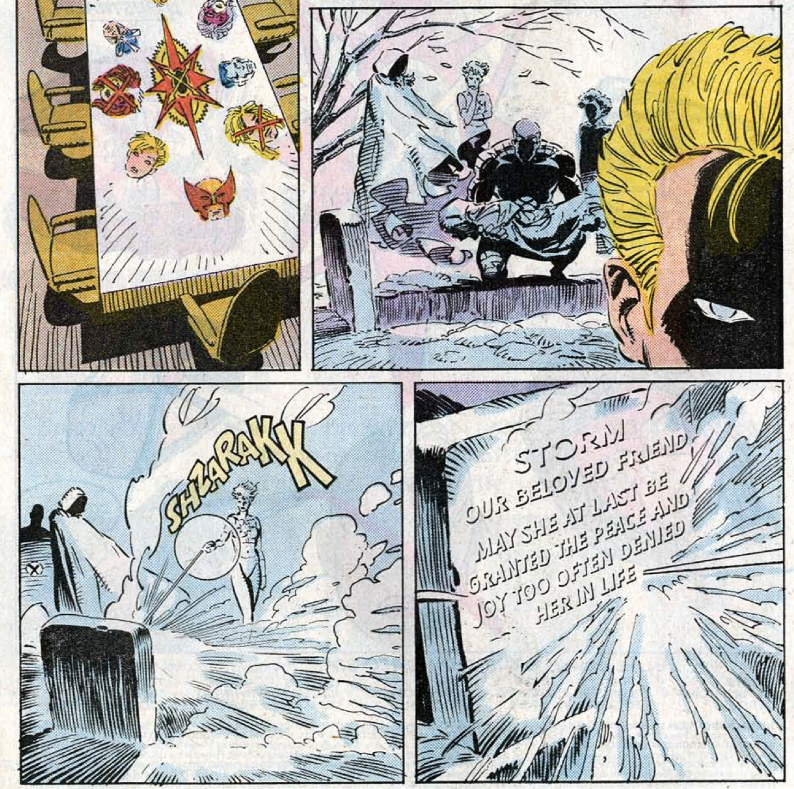 Havok gets angry at Madelyne and the absent Wolverine. 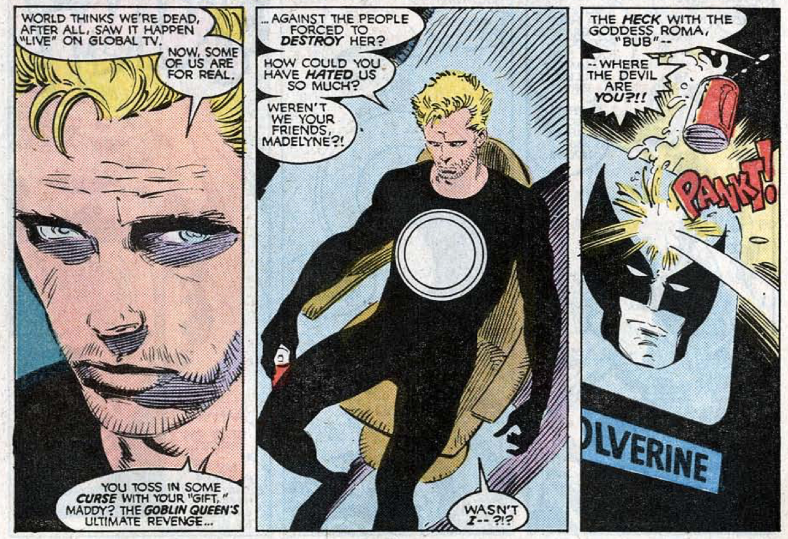 The Reavers old computers continue to act mysteriously, playing back the footage of Storm's funeral on their own, and later repairing themselves, a tease that never really pays off. 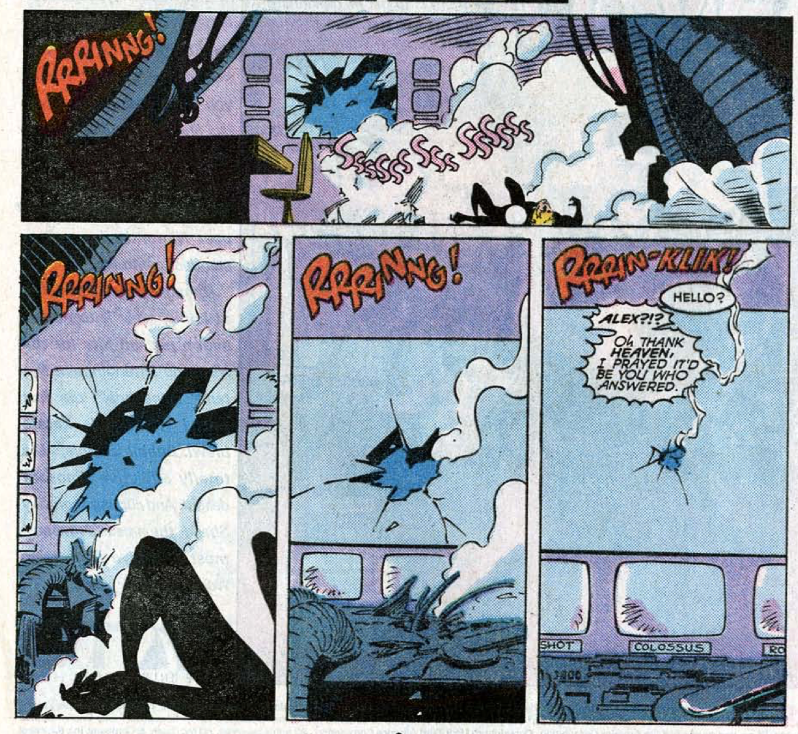 The Reavers are seen performing recon on the X-Men.

Later, we get a bit of motivation for them (beyond pure revenge), with Pierce saying they're humanity's last defense against mutants, a motive that he's foisting on the group more than anything. 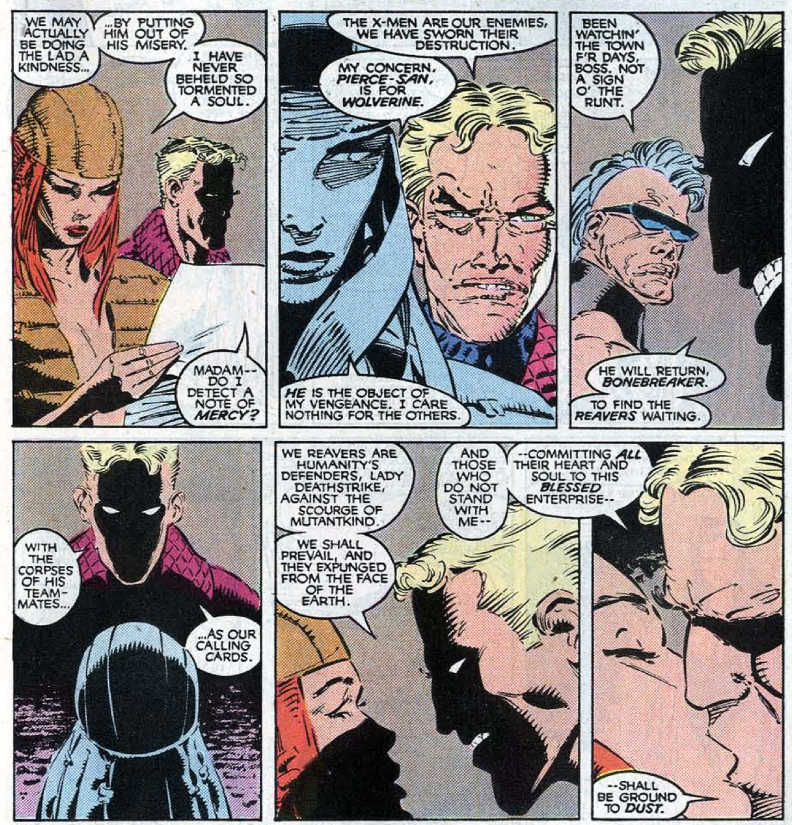 Though never outright stated, Jubilee moves thhe inured Havok into his bedroom and leaves him flowers. 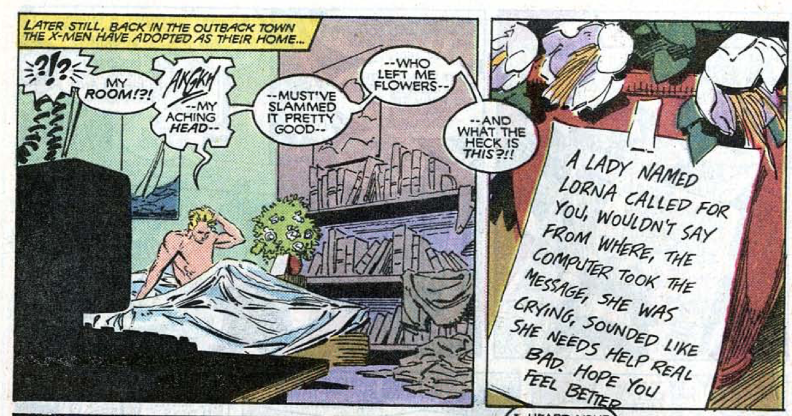 Psylocke later does a full psi-scan of the town but finds no trace of Jubilee, meaning Jubilee's unexplained immunity to telepathic detection remains.

Psylocke "reminds" the X-Men that Gateway can only teleport them home from the location at which they arrive, the first time I recall that stipulation of his power being mentioned.

Havok admits he should have done a better job of studying the files on the X-Men's villains. 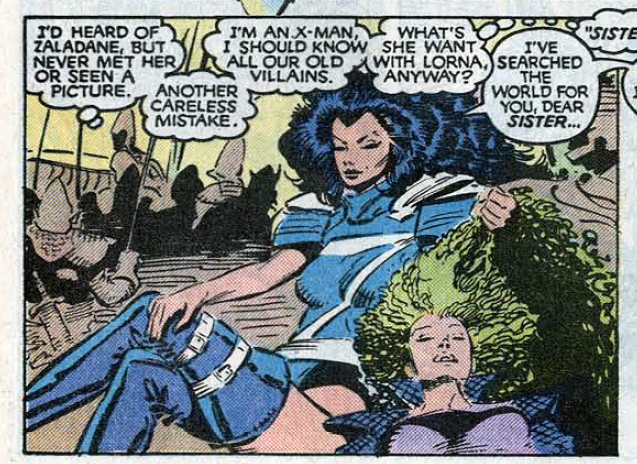 Claremontisms
Havok tells a captured Savage Land goon it's "your choice, your funeral" whether he talks. 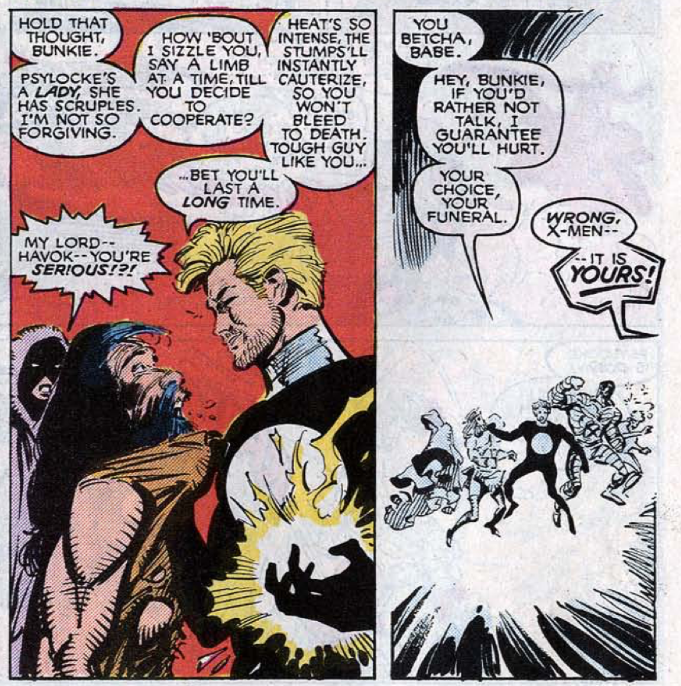 Teebore's Take
I've never been a terribly big fan of the little two-part Savage Land story set within the larger "Dissolution" narrative that kicks off this issue. Part of that, I'll freely admit, is down to a general aversion to Savage Land stories (most of which I find terribly blah). But part of that is also that after three consecutive issues stripping away one member of the team after another, this story hits pause on that in order to circle back around and check in on a lingering supporting character while teasing (yet again) the mystery of Zaladane, who is, at best, a C-level villain at this point.

Granted, I don't want to begrudge Claremont making the effort to tie up some narrative threads, and Polaris, both for her history in the series, her connection to Havok, and the role she'll play (albeit mostly in the background) of the upcoming Muir Isle/Shadow King arc, deserves to be rescued from the narrative limbo into which the end of the Marauders dropped her. But that effort comes at an inopportune time for the larger story, deflating the tension built up over the preceding issues at the moment when it's meant to be perhaps the most severe (the wake of Storm's death) for what ultimately feels like a side quest into a much less interesting story.