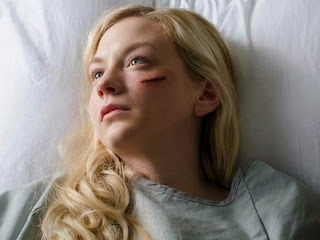 Alright then, apparently in the world of The Walking Dead you can't form any group without a megalomaniac being in charge. Well, unless the person is charge is named Rick. Even that could be debatable, I suppose.

We had one society in which you either eat people or get eaten by people. Another group decided that the only rule necessary for a functional society is the ability to call dibs on things…including young boys. This episode showed us people living in a hospital under control of an OCD police officer who oversees a society of indentured servants (who must keep the officers happy by doing whatever they say) and only brings in people she perceives weaker than herself.

You know The Walking Dead is a bleak show when you realize that living in Woodbury may not have been all that bad, relatively speaking. Sure The Governor went crazy in the end but at the beginning he was just your run-of-the-mill dictator who lied for personal gain. At least there if you kept your head down and just did your job you were relatively safe.

I'll be honest, I was confused for the majority of this episode. I shouldn't have been. It was actually a relatively straightforward episode. What we saw is what we got except I just didn't believe what we were seeing. One issue was that it was tough for me to wrap my head around the idea that there could still be a relatively functional hospital in this world. But the other problem was that I was 100% sure that when Beth was taken from Daryl she was kidnapped by a sexual predator who was going to lock her up in a basement and do unspeakable things to her. I guess it's an example of just how bleak this show is that I couldn't conceive of other options.

Yes, I actually didn't realize, at first, that Officer Dawn Lerner and Officer Gorman were the ones who took her from Daryl. When she said, “What happened to the man I was with.” I thought she meant the man who kidnapped her and whom she was, presumably, escaping from. Of course I realized eventually that she was referring to Daryl. (There is the question of if they purposely left Daryl because he seemed too strong and may have upset the power balance of the hospital.)

Don't worry, I may be stupid but I'm not a moron. Eventually I sorted everything out and realized that while Beth was in a bad spot, she wasn't in as bad as a spot as I thought she might be. Well, except for Officer Gorman, but she took care of that.

So, after I got it all straight in my head I realized I probably should come up with some analysis for this episode. But I'm not sure what there is to say except what I said at the beginning. In The Walking Dead people can come together and try to play nice for a while but, eventually, “tough choices” will have to be made. That means someone will have to take charge and rule with an iron fist. Apparently, no society in The Walking Dead can function without a dark, seedy, secretive underbelly that exists “for the greater good.” There is no alternative…unless the leader of your group is named Rick Grimes.

Other Thoughts:
The opening seemed to be a homage to the first episode The Walking Dead. To what end I do not know.

It goes without saying but I was creeped out by Officer Gorman from the start. Of course, Officer Lerner didn't give me good vibes either.

I'm not sure I've seen many things more uncomfortable to watch in this series than when Officer Gorman was sticking a lollipop in Beth's mouth.

To make matters worse, they were probably those sugar free lollipops. YUCK!

I rewound to verify that Doctor Edwards did indeed tell Beth the wrong medication.

This was, obviously, before it was confirmed later in the episode that he did set Beth up. Because obviously it wouldn't be at all useful to Officer Lerner to have TWO doctors.

I guess Officer Lerner is to doctors as the first three seasons of The Walking Dead was to black people.

This is another episode where they refer to “bombings” in Atlanta. I feel like this is the first season they've brought this up but perhaps I'm wrong.

Did Joan purposely killer herself in Officer Lerner's office in order to turn into a zombie and eat her?

I'm confused why the police officers seem to have easy access to the outside world while for Beth and Noah the only way out was through the elevator shaft. How are the officers getting out of the hospital?

I can usually suspend my disbelief as far as the protagonists' proficiency at headshots go but Beth's literal shots in the dark were ridiculous.

Not to mention the seemingly infinite bullets she had in the gun.

Noah running off and ditching Beth seemed to me like a dick move but Beth seemed cool with it.

I'm fairly sure Beth was planning on killing Doctor Edwards but then she saw Carol and realized she might need him to keep Carol alive.

Of course I'm interested how Carol ended up being taken in. But the whole timeline of everything doesn't seem to make sense. Keep in mind, Daryl has only been gone for around a day and Daryl did come back with somebody. That seems to suggest a lot to happen in just one day but I guess we'll see whether it all syncs up in later episodes.
Newer Post Older Post Home
Posted by Dr. Bitz at 2:29 AM