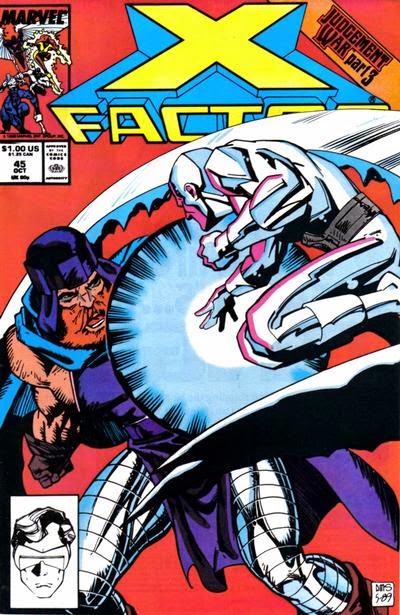 In a Nutshell
Archangel fights in the Arena and Iceman battles Lord Rask.

Plot
In the arena of the Chosen, Archangel is forced to battle a large Reject named Agrom. Though he is initially reluctant to fight and kill for the amusement of the Chosen, Lord Rask orders the guards to release the goads, small barbed spheres laced with a drug which saps his control over his wings. In the end, he nearly kills Agrom, and when he turns his rage on the Chosen, is zapped unconscious by the arena's force field, much to Seera's horror. Meanwhile, in the Reject city, Beast joins Zharkah for the birth of a child who unfortunately dies shortly after being born. That evening, at the child's funeral, Beast offers to look into the Rejects reproduction problems, but Zharkah insists that is the way of the Chosen. In the Chosen City, Seera steals nurtient for Christopher, using her telepathy to cover her tracks. 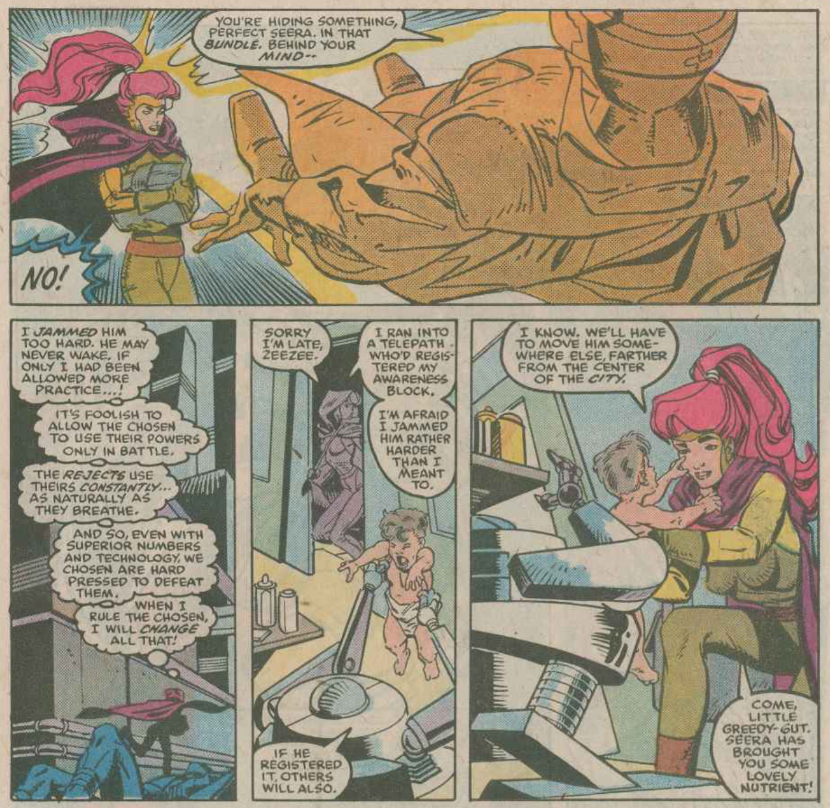 Elsewhere, Cyclops and the Beginagain Dykon encounter the Celestial looming over the cities, and Cyclops wonders if, should all the planet's factions work together, they could drive off the Celestials. The next day, Beast hears word of Archangel's battle in the arena, and, joined by some eager Rejects, begins planning an assault on the Chosen city to retrieve him. In the city's practice area, Iceman and Lev hone their abilities until Rask and a contingent of Chosen interrupt them. Challenging Rask to a dual, Iceman handily defeats him, after which Rask challenges Iceman in turn to face Archangel in the arena, which he accepts. In the cells beneath the arena, Archangel awakens alongside Agrom and vows that, knowing what to expect now from the Chosen's drugs, he'll destroy them. Unknownst to him, however, Seera is watching via a security monitor and, believing herself responsible for his current state, vows to free him before he's forced to battle his friend.

Firsts and Other Notables
Cyclops' discussion with Dykon at the foot of a Celestial, suggesting that if the Chosen, Rejects and Beginagains all came together against the Celestials they could drive off the aliens is, not surprisingly, ultimately how the Celestials are defeated. 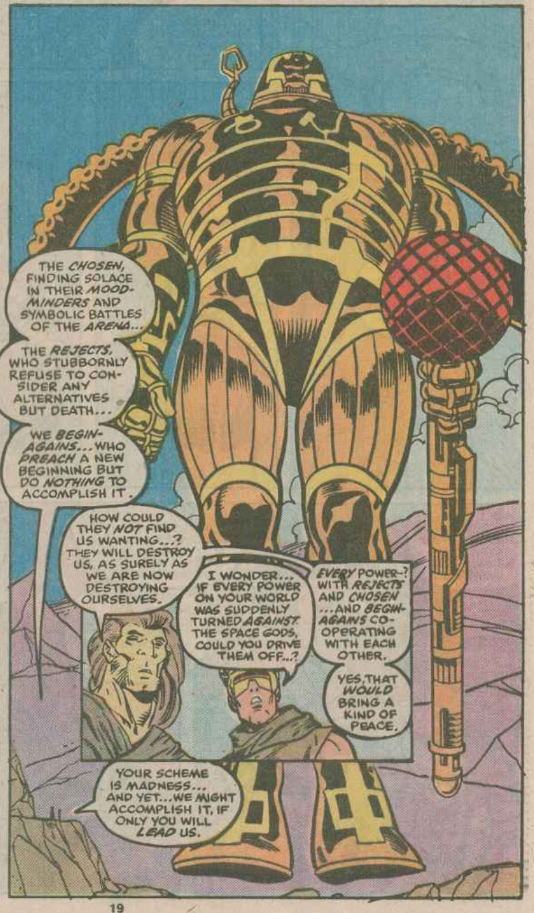 A Work in Progress
Agrom is said to be the son of Vlon, the large Alf-ish Reject sitting atop one of the spires of the Reject city seen last issue.

Despite having no memory of his past life, Iceman sticks up for the Dualers and bristles at being talked down to by the Chosen, a nice indication of his personality coming through regardless of the state of his memories. 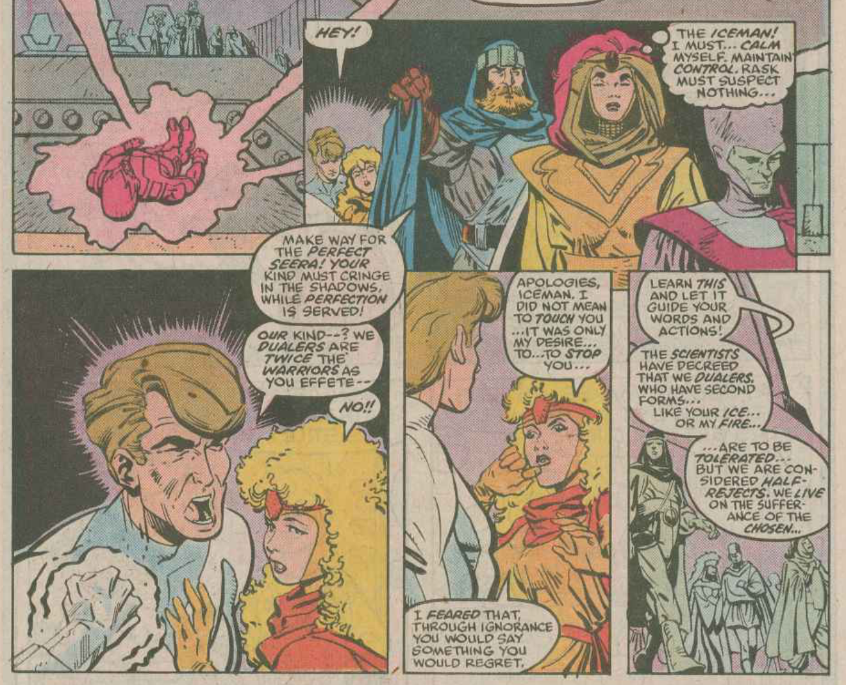 Beast engages in a philosophical debate with Zharkah over whether it's better to trust in a higher power, or use the abilities given by that power to actively work to make the world a better place. 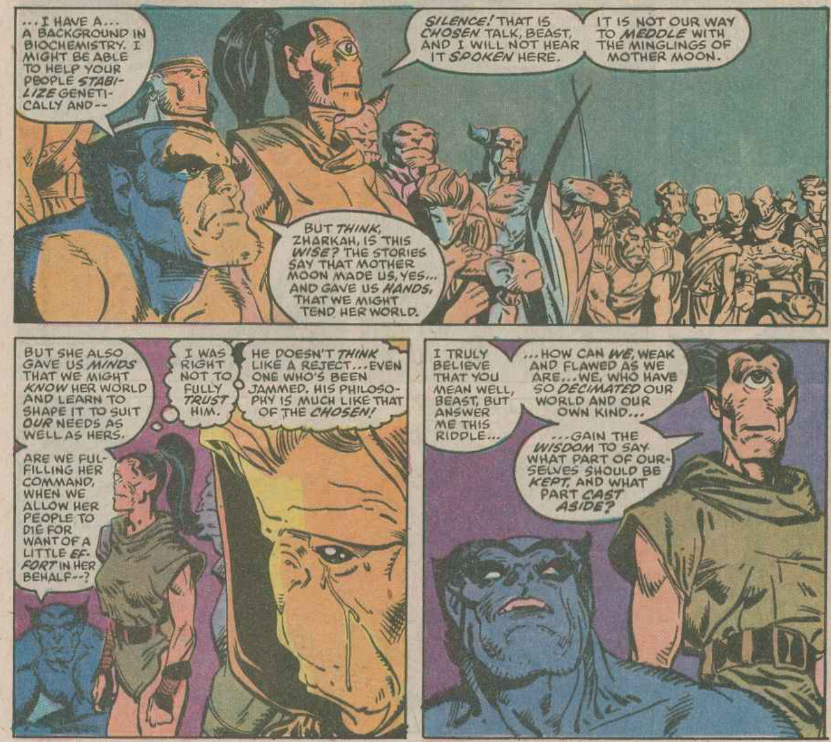 It's said that Christopher is telepathically projecting his fear and distress, which Seera is using her power to block. However, other telepaths are starting to notice the "dead zone" where she's blocking their awareness. 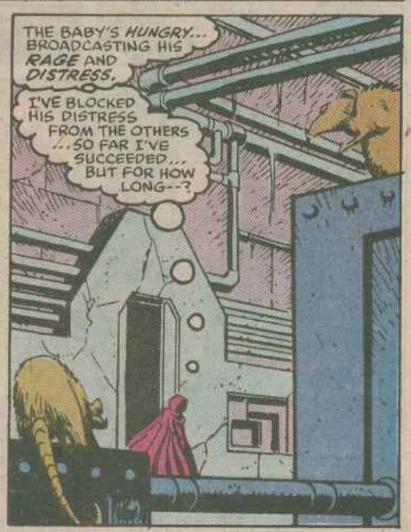 It's noted that the Chosen mostly only use their powers in battle, whereas the Rejects use them regularly and nonchalantly, which is how the Rejects have held their own against the Chosen in the face of greater numbers. 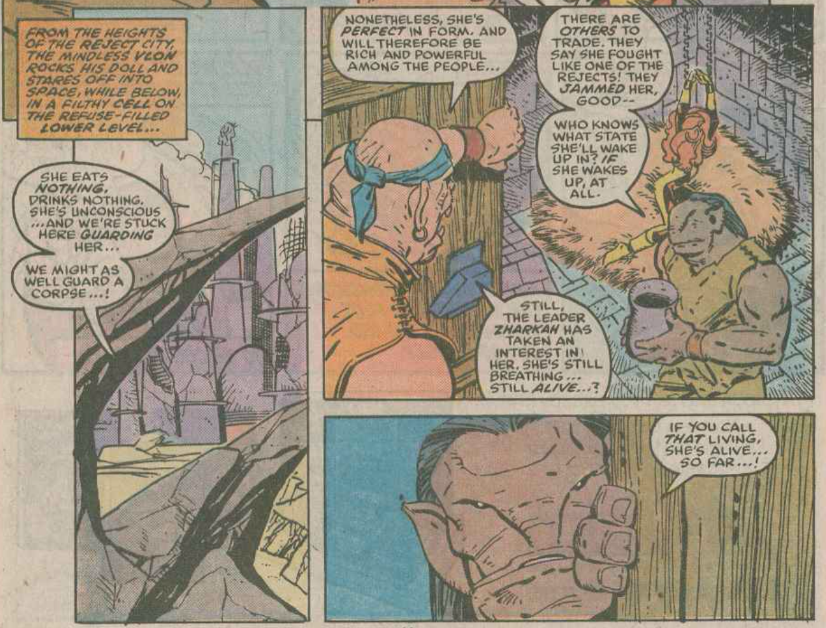 I Love the 80s
Agrom always reminds me of the behemoth Duke is forced to fight in the Cobra Arena (whom he later befriends) in the first GI Joe animated miniseries.

Artistic Achievements
In at least one instance, Beast's universal translator can be seen, still affixed to his chest, a nice little detail.

Teebore's Take
Having established where the characters are in relation to one another last issue, this one starts to move the plot ahead, with that activity bookended by a pair of extended fight scenes. Between those two fights, we see Beast learn of Archangel's location and begin to plot an assault on the Chosen, Cyclops suggest an alternative to the planet being destroyed by the Celestials and Seera, while growing increasingly enamored of Christopher, vow to free Archangel herself as she continues to grapple with the increasingly-obvious shortcomings of her society.

Even while setting the plot in motion, Simonson and Smith continue to build this world, making it feel more fully realized, from little details like Agrom being the son of Vlon, to more philosophical details like the reproductive issues facing both the Chosen and the Rejects, and their respective rationalizations for not doing anything about it. X-Factor as a team is still too scattered/amnesiac for this to feel like they're the actual stars of the story, but there's some effective moments of characterization (I especially like how Iceman, who was trained for one-on-one/small group combat does much better against Rask than in a full fledged melee) that keep them from being too disconnected from the narrative (the unfortunately still unconscious Marvel Girl aside). This is still more a one-off space opera than an X-Factor story, but three issues in, Simonson and Smith have done a good enough job crafting a well-realized world with interesting characters that it's hard to mind that too much.