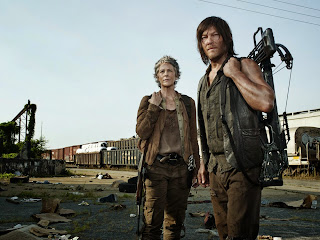 This episode had its moments. My initial reaction was that it was perfectly decent. However, the more I thought about it the more I realized this wasn't a very good episode. Despite some decent moments, a lot of things bothered me. (And no, it's not because it was a Carol-centric episode.)

The episode started rough. The opening montage of what Carol was up to between her exile and her return didn't impress me. The flashback felt wholly unnecessary. Carol was the same person when she returned as when she left. There was no transformation we needed to see. Nothing was shown to us that we couldn't infer on our own.

Then we get to the silliness of Carol and Daryl following a police officer who never figured out he was being tailed. Sure they didn't have headlights but cars still make noise. Beyond that, I have a feeling that the reasoning for all the vehicles at the hospital having a cross on them will never be explained except that it helps the protagonists follow them.

Then Carol and Daryl end up meeting Noah. This scene commits the writing sin of coincidence. How big of coincidence is up for debate. Carol and Daryl were tracking people from the same group that Noah came from. But, seriously, what are the odds that the timing would line up for them to meet each other? This issue wasn't egregious but, hey, I'm a roll.

Meeting Noah prompts Carol to try and shoot Noah. I'll be the first to admit that her actions here are defensible considering he was stealing their weapons. But Daryl stopped her and that's fine. Carol defending herself saying she wasn't going to kill him but, instead, only shoot his leg is laughable, though. Obviously those two aren't mutually exclusive. Carol is either lying or stupid. If she did shoot Noah in the leg his odds of survival aren't much better than shooting him in the chest. If Noah didn't bleed out or die of an infection he'd probably be limping zombie food.

Next we get Carol and Daryl getting surrounded by zombies and deciding that buckling up and tipping a van off a highway bridge is the best course of action. Frankly, it may have indeed been their best option. The possibility exists that they could survive the fall but the odds were against them. However, not only do both of them live but they walk away from crash relatively unscathed.

Noah shows up again and this time gets trapped under a bookshelf. I was pleasantly surprised that Carol wanted to save Noah but now Daryl, seemingly randomly, decides to be the callous one. It would make more sense if Daryl saved Noah's life, then Noah betrayed them and then, upon Daryl finding Noah again, decided not to spare him. But that's what happened. Noah stole from them first, then Daryl saved his life and then Daryl decided not to save him a second time. Daryl ends up helping Noah out (who ends up having valuable information) but I'm still not sure why Daryl initially decided to let him die on their second meeting.

Finally we end with Carol, pretty much out of nowhere, getting hit by a car. How did this happen? Did the drivers not see Carol? Did Carol not hear or see the car? This was literally the only car on the road and Carol was literally the only pedestrian. Even if this was an intentional act by the driver I still don't know why Carol didn't hear the car and avoid it.

Nothing I brought up was enough on its own to make me not like the episode. But there was a cumulative effect here. Each of these things, upon reflection, made me roll my eyes. Holes started developing in the story. Eventually, the whole thing looked like Swiss cheese. It's ironic that I didn't like this episode. I like Swiss cheese.

Other Thoughts:
When the episode first started I was a little afraid the entire episode would be a Carol flashback. At least I dodged that bullet.

Carol mentions Lizzie and Mika and Daryl says he knows all he needs to know (they're not there). This prompts Carol to say "it's worse than that." If I was Daryl I'd assume that meant Carol killed the kids because they were slowing her down.

I will say the scene with Daryl and Carol in the family shelter was well done.

I assume Daryl took the self help book because of how Merle...or his father...treated him.

So Noah will be the mystery person at the end of "Four Walls and a Roof". Now sure how I feel about that. I can't think of anything that would live up to the hype but if it's a character we had yet to have met (at the time) why not show him and make us curious as to who the heck we are looking at?

I still feel the timeline for everything is dubious. In "Four Walls and a Roof" it felt like Daryl was gone for two days max. It already feels like Carol and Daryl have been gone longer than that. Then, in Slabtown, it felt like Carol showed up relatively quickly after Noah escaped. But Noah met (and stole weapons from) Carol and Daryl and there seemed to be a long time between that first meeting and when Carol was hit by a car. Maybe there's a way for it all to work but it does seem suspect.

On The Talking Dead Yvette Nicole Brown says she watches every episode three times and then, when the season is over, she rewatches the entire season. I think she was serious. I pity her.

Actor Tyler James Williams (Noah) said on The Talking Dead that Noah is slowly getting to the place (mentally speaking) that Rick's group is which is the same place Shane was. Shane was just "ahead of his time." No. I suppose I should point out this the actor's opinion and not necessarily how the show runners view things but, ugh, Shane love. And if the group was like Shane then Daryl would've let Carol kill Noah. Beyond that, Father Gabriel would be dead, Tyrese...dead, Sergeant Abraham...dead, Tara...dead, need I go on? My point is Shane was a xenophobic sociopath.
Newer Post Older Post Home
Posted by Dr. Bitz at 12:22 AM