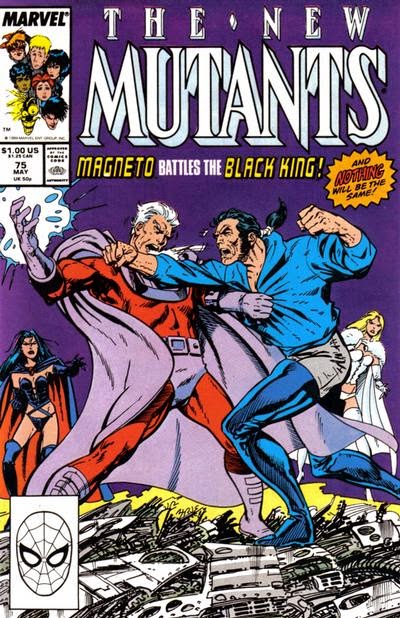 In a Nutshell
The New Mutants quit Xavier's school.

Plot
At the remains of the X-Mansion, the New Mutants are shocked by all the damage. Spotting a death glow amidst the rubble, Dani directs Roberto, who frees a badly injured Sabretooth. After a brief tussle, the villain seemingly dies of his injuries, but Dani doesn't see death coming for him. Just then, Magneto, along with the rest of the Inner Circle, arrive. Roberto impulsively attacks Magneto, and a fight between the two teams breaks out, which ends when Magneto encases his students in a ball of metal wreckage. He then learns what has happened to Illyana. Angry that he's lost the most powerful of all the New Mutants, Shaw attacks Magneto, declaring he be removed as White King. As they battle one another, the New Mutants learn that Magneto started bossing them around in the hopes of molding them into better soldiers, and that he made a conscious decision not to help the X-Men in Dallas. Having heard enough, the New Mutants endeavor to break out of their prison, but are unable to do so. 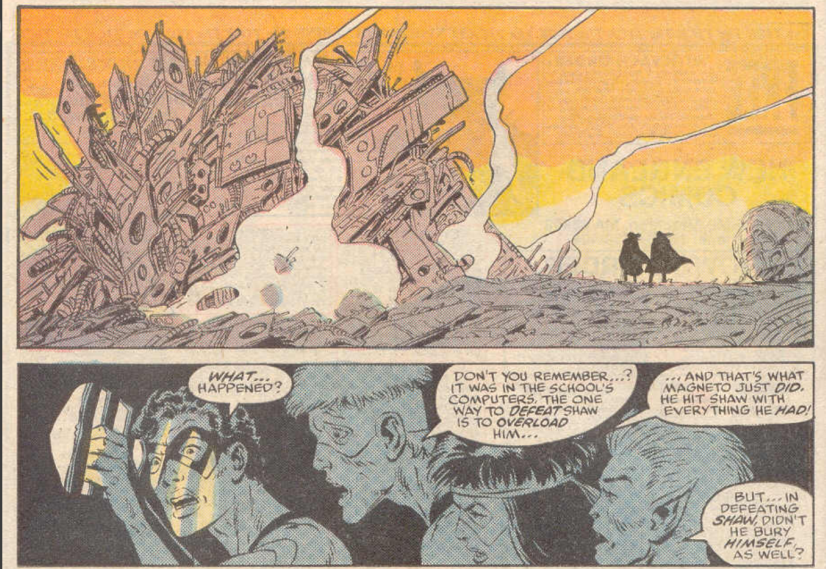 Magneto ultimately defeats Shaw by overloading his power, then moves that it is Shaw who be removed from the Inner Circle. Backed by both the White Queen and Selene, Shaw is voted out, and Magneto assumes both male titles, christening himself the Hellfire Club's Grey King. He then releases the still-defiant New Mutants and gives them leave to go, asking only that they remember what they've learned there, and declaring that, in time, some of them will return to join him in his conquest. As the New Mutants leave, the White Queen telepathically learns they're aware of the Hellfire Club's connection to Amara and her father's kingdom. Magneto isn't bothered by this revelation, confidant the New Mutants will eventually go there to try and save their friend, and in doing so, weaken Selene, such that soon, there will be only one queen of the Hellfire Club, as there is now but one king.

Firsts and Other Notables
The New Mutants, having already decided to do so last issue, formally quit Xavier's school and remove themselves from Magneto's tutelage this issue, beginning a short period in the title's history in which the characters, along with the integrated X-Terminators, are formally wards of X-Factor but essentially operating on their own, setting the stage for the debut of Cable and his assumption of the mentor role for the characters.

This issue marks, if not the full on return, then the beginning of Magneto's return to outright villainy. Largely credited to John Byrne (who will use the character as a villain in his "Acts of Vengeance" issues of Avengers West Coast and who fairly publicly turned up his nose at the idea of Reformed Magneto), Simonson certainly lays the groundwork for Magneto's heel turn here, definitively cutting his ties with the New Mutants and Xavier's school and positioning him as, more or less, the head of the Hellfire Club's Inner Circle (Claremont, of course, will have some things to say about all this in the pages of X-Men eventually, and his work developing Magneto as a character is far from over).

To that end, like X-Factor #38, this issue doles out a fair number of retcons as Simonson tries to transition Reformed Magneto to Villain Again Magneto. To that end, Magneto says that he considered the X-Men, already steadfast in their devotion to Xavier's dream, to be mutantkind's first line of defense against extinction, which is why he allowed them to face the Marauders in the Morlock Tunnels during "Mutant Massacre", but held himself back.

Furthermore, in order to better mold the younger New Mutants into worthy soldiers in the war for mutantkind's survival, he treated them with a firmer hand, what Sam describes as "bossing them around", which actually works as a halfway decent in-story explanation for the shift in Magneto's characterization that occurred when Simonson took over the title from Claremont (as Magneto did indeed become more tyrannical and less reasonable when Simonson took over, which was shortly after "Mutant Massacre"). 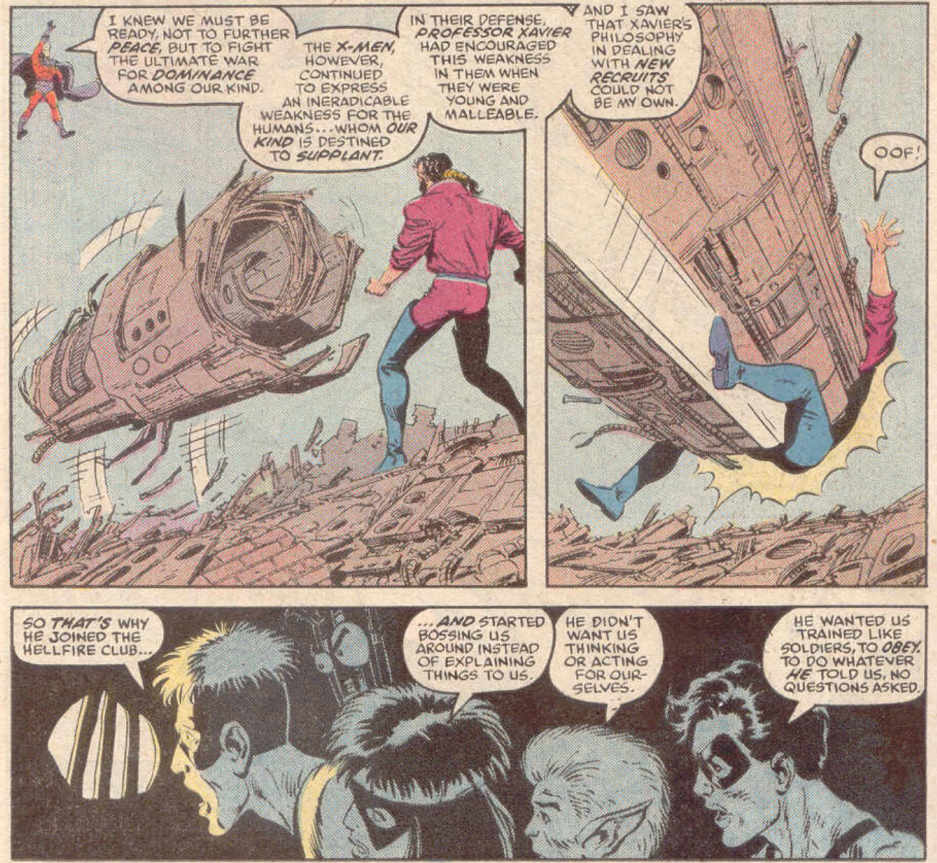 It's revealed that Magneto didn't go to the X-Men's aid in Dallas and he let them die (as far as he knows) because they proved themselves too devoted to Xavier's way of thinking, and thus wouldn't be useful in his expected war. 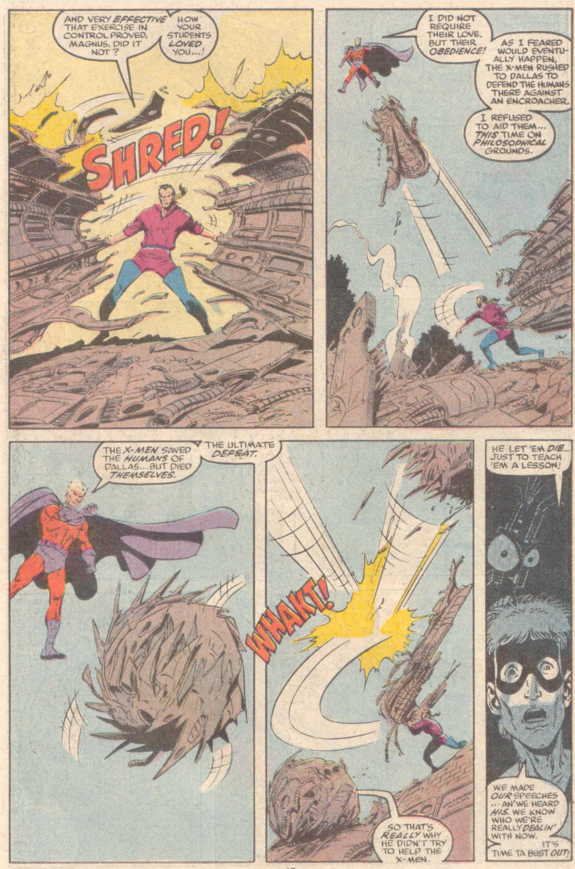 Finally, Magneto successfully leads the ouster of Sebastian Shaw from the Inner Circle in this issue, assuming the mantle of Grey King (both White and Black). Though no longer a member of the Hellfire Club, Shaw will continue to pop up from time to time before ultimately regaining his position.

This issue also establishes that Magneto is aware of Genosha (a country whose existence would, one would assume, cause Magneto no small amount of rage), and that the Hellfire Club has interests there as well. 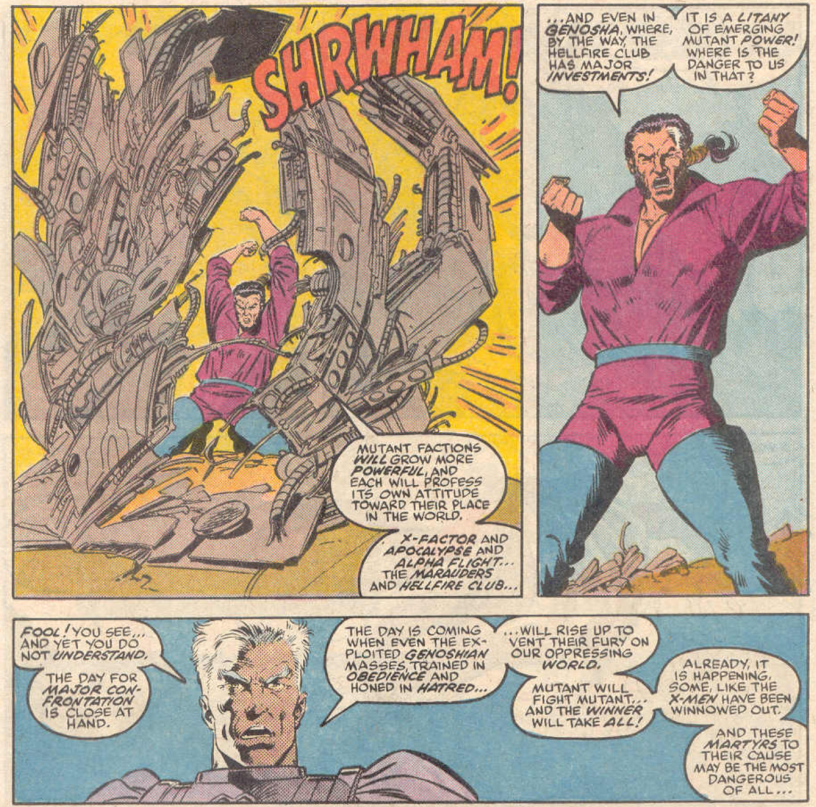 Selene's Amazon holdings and the threat to Amara, first mentioned in New Mutants Annual #3, are referenced again, though Simonson won't ever get around to fully exploring this idea.

The New Mutants pull Sabretooth from the wreckage of the X-Mansion (where Wolverine presumably left him after X-Factor #39) and battle him briefly before he apparently dies, though Dani notes there's no death image hovering over him, presumably another hint at his clone nature.

As was noted in the comments to last issue, Bom-Boom and Rictor have been added to the corner cover box, even though the X-Terminators aren't considered to have formally joined the New Mutants until next issue, and even though when they do join, Rusty and Skids join as well (suggesting the ultimate separation of those two from the rest of the team may have been planned from the outset of the merging of the teams).

John Byrne provides the pencil art to this issue, making this, I believe, the first time he's contributed to an X-book since leaving X-Men. He is inked by returning series co-creator Bob McLeod. While Blevins' art is not without its charms, it's still refreshing to see the characters, particularly four of the original five members, drawn to look more like real people than bobbleheaded imps for a change.

A Work in Progress
As teased last issue, the New Mutants discover the X-Mansion has been destroyed.

It's noted that Illyana no longer speaks English, as her past self had never learned English prior to being captured by Belasco (as noted in X-Men #153, Professor X telepathically taught the X-Men Russian so they could communicate with her, rather than the far easier route of teaching Illyana English). 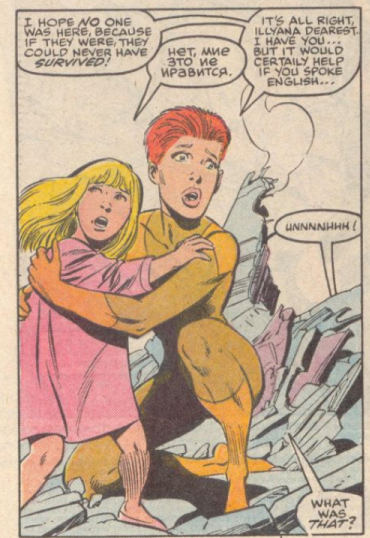 Magneto learns that Illyana has been restored to childhood this issue, something which Shaw uses against him, saying that Illyana was the most powerful of the New Mutants and the one most likely to serve the Hellfire Club's interests. 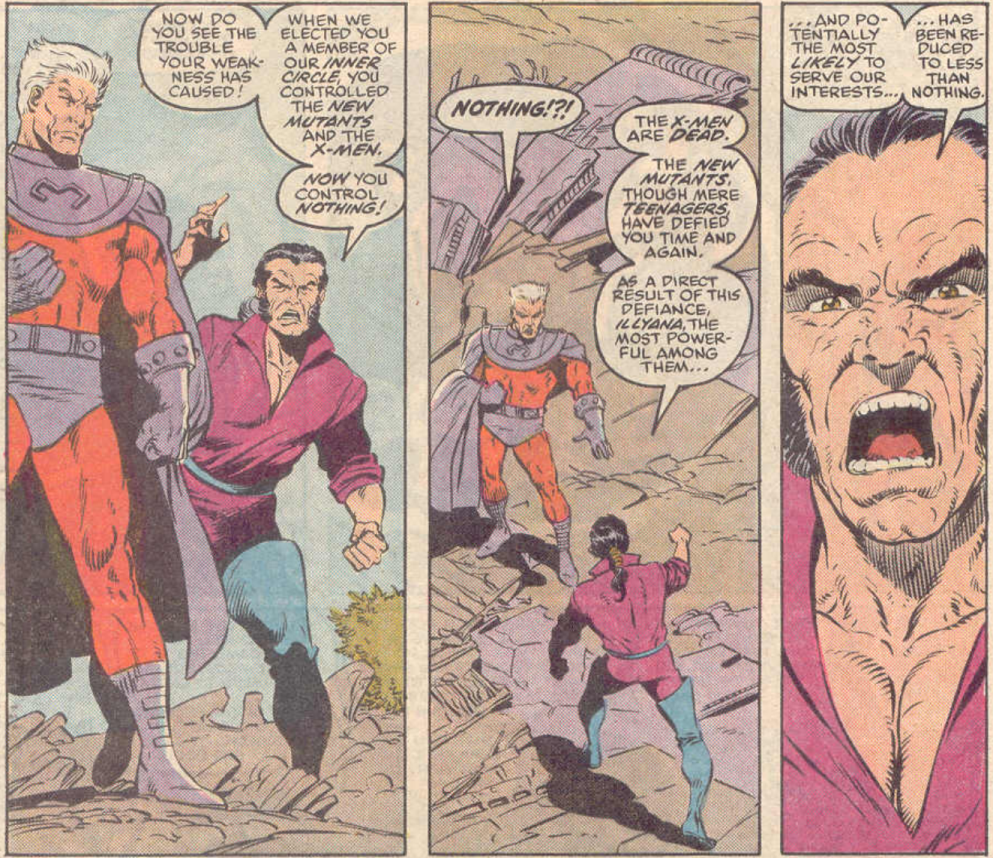 Magneto mentions that a human woman fostered hope in him, a reference to Lee Forester which really just begs the question of where the heck she is (I believe she was last seen in X-Men #199). 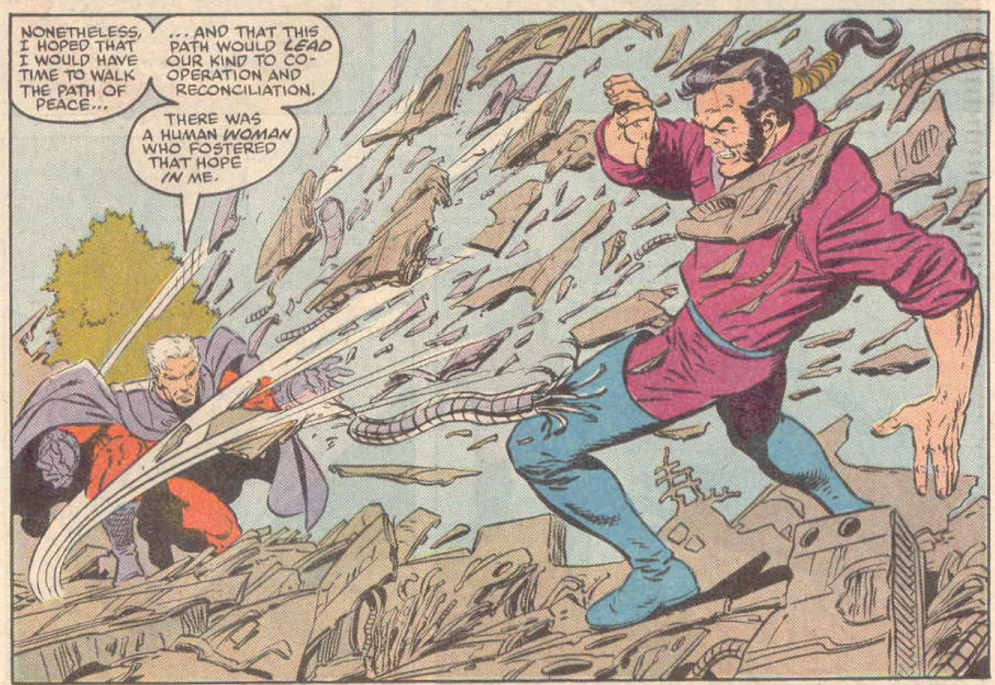 The rest of the Inner Circle is made aware of Shaw's involvement with the government's Sentinel program.

This prompts the White Queen to recall the battle with Nimrod from X-Men #208-209, and the deaths of Leland and Von Roehme (though the White Queen herself was not at that battle). 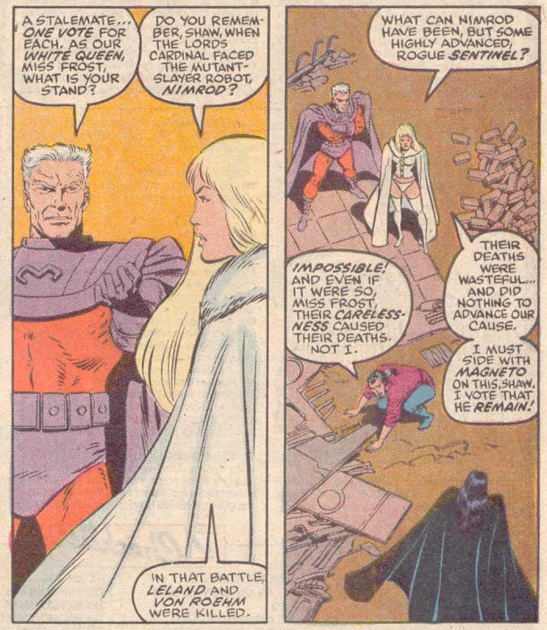 The White Queen telepathically learns that the New Mutants are aware of the Hellfire Club's designs on the Amazon, and she and Magneto conspire to use them to weaken Selene. 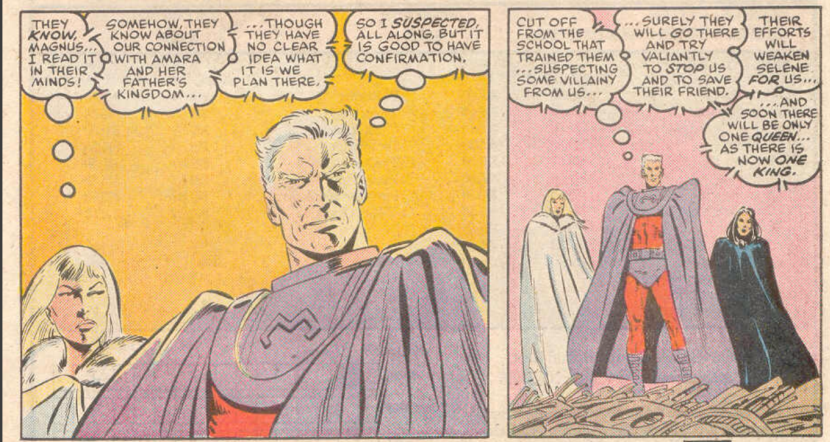 Teebore's Take
This issue does two significant things which affect the future of this series. First, it effectively restores Magneto to outright villainy, or, at the very least, removes him from his position as the New Mutants' mentor and, combined with the apparent death of the X-Men, severs his ties as an ally of Xavier's pupils, freeing up the character for more traditionally villainous portrayals in other series. Simonson's retcons to the conditions of Magneto's alliance with Xavier's school work about as well as the Madelyne Pryor retcons from "Inferno"; they mostly fit, though they require a bit of squinting to do so, and they don't ultimately leave the character in the best of places. Certainly, the idea that Magneto has been giving the New Mutants tough love in order to make them more soldiery and obediant fits with Simonson's depiction of Magneto once she took over the title, but it doesn't quite gel with the Claremontian Magneto who expressed genuine affection for the New Mutants and was wracked with sorrow over their Beyonder-inflicted malaise.

Secondly, this issue formally severs the New Mutants from their tutelage at Xavier's school, meaning that none of the characters involved in the now five X-books are operating, however tenuously, out of Xavier's mansion, a condition that hasn't existed since the brief Bermuda Triangle stay of the X-Men. More importantly, following in the wake of "Inferno", it moves New Mutants out of the second phase of its existence ("students of Magneto") and into its third phase ("wards of X-Factor, but mainly just on their own"). While this third phase will be relatively short (and dominated by one exceedingly long story), it will in turn lead to arguably the most significant phase of the title's history. For whatever plans Simonson had for the series going forward, she will ultimately get only about ten issues to explore them on her own before the arrival of Rob Liefeld and thus the beginning of the series' fourth, and final, phase. As such, this issue is both the end of an era for the series, and the beginning of its end.